Hailing from France, atmospheric doom group Ixion was originally formed in 2004 as a solo project by main composer and multi-instrumentalist Julien Prat. Influenced by ambient/electronic sounds, metal and goth, Prat decided to create a musical project that combined the bleakness of doom-metal and the darkness of gothic musical with some beautiful and ethereal ambiences.
The project grows into a duo in 2006 with the arrival of vocalist Thomas Saudray, who brings a harsher edge to the band’s sound, contrasting nicely with Prat’s dreamy and mystical compositions. One year later, the duo records and releases a demo titled “Through The Space We Die” that was highly acclaimed by French press. In 2006, Ixion expands into a trio with Yannick Dilly joining them as second vocalist and producer and from here preparations began for the band’s debut album released in early 2011 by Avantgarde Music.
“To The Void” sees Ixion solidifying both their confidence and musical direction and received an incredible critical response, including an album of the month nomination in France’s Rock Hard Magazine.
Now, after a nearly four year writing period, the French trio presents us their second full-length titled “Enfant de la Nuit”, a remarkable album that is simultaneously dark and engaging, heavy and melodic and will surely surprise fans of early-Tiamat, Lake of Tears and Draconian. 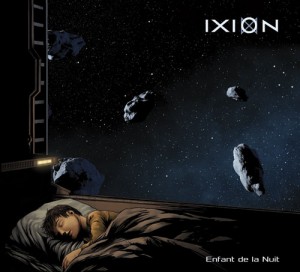 1. Ghost in the shell

6. Children of the Night