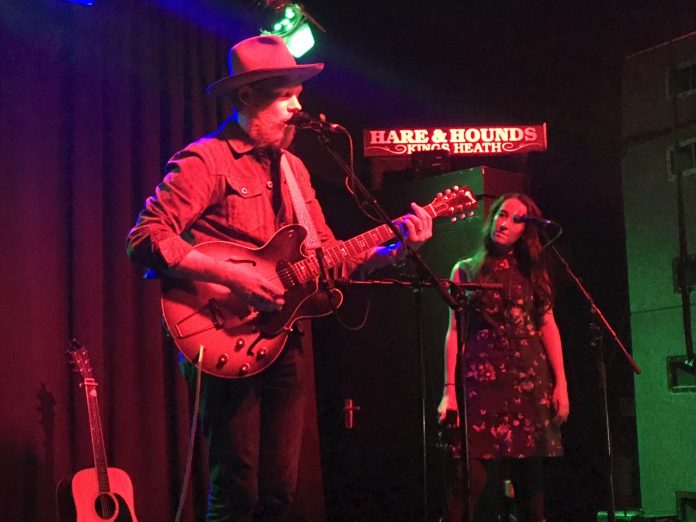 So frequent are Jarrod Dickenson’s visits here, that if he didn’t look so much like he was from Texas you could be forgiven for not knowing. This is the third occasion he’s brought his cowboy hat to these parts in 2017, but there is one key difference this time.

His brand-new album is out.

Yep, finally “Ready The Horses” has seen the light of day, and in fact so road tested are the songs on it that there is opportunity in his 80 minutes for one so new that it didn’t actually make the record he put out less than a week ago.

But such is the warmth on stage tonight, that Dickenson – who is appearing with his wife Claire here – could pretty much do what he pleased and everyone would be on board.

The fact that this is – like the show he played with White Buffalo back in January – stripped back and acoustic particularly helps. As good as the full band gig was in the spring, it does feel that this is his natural habitat and allows his charming, laid back style to really to the fore, as well as giving him the chance to share some truly beautiful harmonies with the missus.

These shine through on songs like the gorgeous “Take It From Me” and the even better “Your Heart Belongs To Me” both of which are on the new album and absolutely sparkle here.

In between there is some dry as the dustbowl blues with “Work For The Working Man” written about the great depression, but somehow strangely apt today. Indeed, that is a theme he returns to with the superb “Gold Rush” later in the set.

There is a real sense of fun here too, Dickenson forgets the words to “California” (“I’ve only been playing it a decade, do not clap that”, he jokes) and no one cares less, it only strengthens the thought that this is truly live music played by humble people.

The set compels throughout “Nothing More” has a feel of “Gold” era Ryan Adams about it, and there is a glorious classic country air on “Cowboy And The Moon” – one of just two songs he plays totally solo.

The other comes in what would perhaps be an encore, but it isn’t that type of room and such things don’t appear that they’d sit comfortably with him anyway. Instead, he plays “I Won’t Quit” – the last song on “…Horses” a track about his wife, while she watches on.

She joins him again for the final song. Finishing with a cover – they’d earlier played an emotional “You Wreck Me” in tribute to the late Tom Petty – is something many artists do, but reasonably you probably didn’t see this gig ending with George Michael’s “Faith.” But it does, and very good it is too, plus it means we all get the chance to admit we liked it all along.

Pop tomfoolery aside, tonight was yet more proof that Jarrod Dickenson is one of the finest singer/songwriters around right now. Ready the horses, because he’s about to come up on the rails like a thoroughbred.