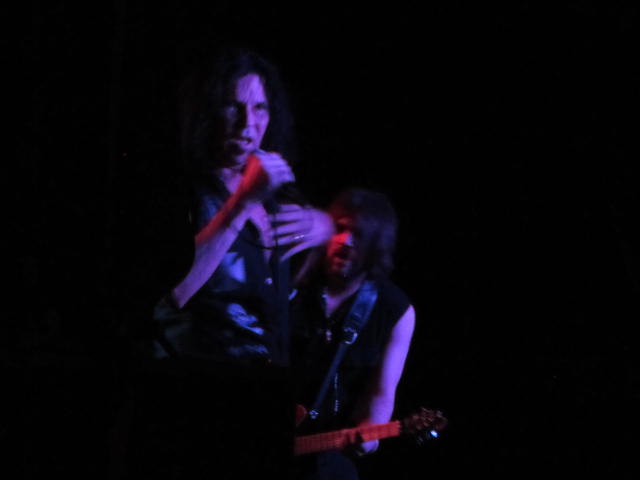 November 20th 1991. Not perhaps a day that lives long in the memory of many people, but to MV it is the day that convinced that this rock’n’roll thing, was alright. In fact, its highly probable that this website wouldn’t exist without the events of that night. For that was the night when Skid Row came to town and brought LA Guns with them, together with another California band Love/Hate….

Knock Out Kaine weren’t there in all likelihood, but the Lincoln mob are imbued with the same spirit. Starting with their best song “16 Grams Of Heart Attack” (which is as good now as when it made our end of year playlist in 2015) is a masterstroke as it gets the crowd onside from the off. Much of their set is from the more mid-paced end of their material, “Cascading” is fun “Coming Home” resurrects the power ballad and frontman Dean Foxx (and if there was ever a band that was deserving of a singer with two X’s in his name, it’s this one) is a mighty presence. “Backseat Romeo” drips with sleaze, and “Little Crystal” adds drugs to the sex and rock n roll. “Time” is bluesy and “Flying Blind” soars to a conclusion. Perhaps they’ll have more raucous nights than this but KoK have everything you need for a late 80s rock revival.

March 23 2017. Jizzy Pearl is rolling back the years. He arrives on the stage with a cross made of Budweiser cans just as bassist Skid used to do back in the day, and he’s here to celebrate the 25th anniversary of the bands second record “Wasted In America.”

Leaving aside the fact that it has no right to be a quarter of a century old, Pearl and his bandmates drummer Mickey Richards of Ryan Hamilton and the Traitors fame, guitarist Stevie Pierce (Warrior Soul) and Christian Kimmet on bass, keep the fires of nostalgia burning.

The title track, “Spit” and “Miss America” are an insight into a band that was part AC/DC and part Frank Zappa – and also prove that this record is one you overlook at your peril.

Pearl, though is too savvy to do one of those boring, “lets play the album in full in order” shows, and instead he intersperses them with cuts from the stone cold classic debut record. If “Tumbleweed” and “Fuel To Run” have been played thousands of times, then equally tonight is also the chance to hear songs from “Wasted….” That you didn’t even back in the day, “Tranquilizer”, “Happy Hour” and “Time’s Up” are a trio that you might not have dug out in decades – and that is the point of the evening. It’s to celebrate the music of a band that – when they were good – were as good as it got.

It’s hit single “Evil Twin” is still mighty, as is “Spinning Wheel” from the follow up album. These might be in an encore for other groups, but there’s none of that nonsense here, instead its heads down and headlong into “Blackout In The Red Room”, still surely the cause of hangovers everywhere.

There does seem to be a realisation that this nostalgia trip is fun and all, but Pearl needs to move on. As he says, “I am recording a new album ….I’m all out of anniversaries after this”. But you suspect he’ll still have to play his share of “Love/Hate songs whatever he does. The 30th Anniversary might as well get booked in now.