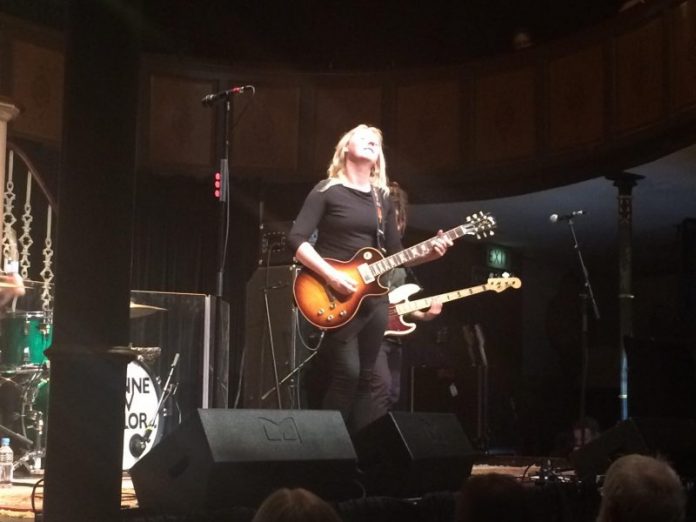 Jo goes wild in church. Or something.

It’s Monday night and Joanne Shaw Taylor is in church. To be accurate we are all in church as Huntingdon Hall is a chapel. But one of the finest blues guitar players in Britain has a warning. “Just because we are where we are,” she says. “Doesn’t mean you can be quiet. I don’t know too much about God, but I believe he likes you to drink and party in his house…..”

This always had the potential to be a party, as it is the closest JST is getting to a hometown show on this run. The Solihull native has come 30 miles down the M5 to showcase here new album “Wild” – just released and her best performing record to date. Presently it is in the top twenty of the album charts.

Easy to see why too. Even for someone who has built up this body of work, he new one is a cracker and a good portion of them are played here. “Dyin’ To Know” is simple and fun, “No Reason To Stay” is possessing of a chorus that almost makes it work the broken relationship that spawned it and is a real highlight of a set that stretches to close on two hours.

It helps that, although she’s the undoubted star, Shaw Taylor has a fine band around her. The organ of Drew Wynan particularly prominent in work like the funky “Diamonds In The Dirt”, and elevates things throughout, while drummer Lewis Perry and fabulously coiffured bass man Luigi Casanova are as good a rhythm section as there is.

Joanne herself has cemented her reputation on three things and all are in evidence throughout here. First, hard work. She is brely ever off the road or out of the studio, second is her wonderful guitar playing – check out the solo in many, but “Tried, Tested And True” is particularly impressive – but third is her voice. Deep and with echoes of Janis Joplin, she is able to carry the songs with aplomb, as well as versatility.

A cover of Bowie’s “Wild Is The Wind” is lovingly delivered, with “Wanna Be My Lover” as different as can be, before one of the older ones, “Tied And Bound” soars a conclusion, and after an encore of “Goin’ Home” we do just that.

But s always, not before we’ve seen that yet again JST is a talent to cherish. Even in these boom times for blues, she’s one of the best – and she is finally getting her rewards.