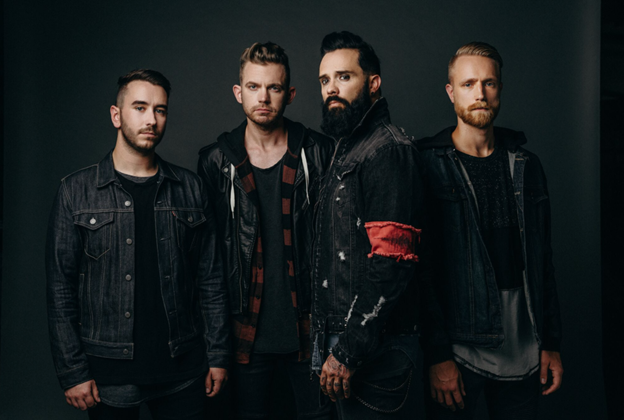 Fight The Fury, the newly announced and eagerly awaited metal project from Skillet frontman and bassist John Cooper, has shared more details about its upcoming debut EP.
Still Breathing will be released on October 26 via Atlantic Records. To herald the release, the band has shared the new song “My Demons.” The song is available as an instant grat track for all fans who pre-order the album. The pre-order is live here.
The band also features Skillet guitarist Seth Morrison, along with drummer Jared Ward and guitarist John Panzer III.
“‘My Demons’ is the first song that I wrote for the project about five years ago when I first had the idea to start Fight the Fury,” Cooper shared, offering some insight into the track. “It’s a good first taste for fans because it’s got all of the ingredients of the band: aggression, melody, screaming, angst, a touch of progressive rock, and frenzied chaos. It touches on some dark themes that can be related in general to most people’s individual struggles in life.”
He finished, “However, I wrote it specifically for those who have been victims of abuse. Some scars run so deep that we never fully heal. My hope is that through the lyrics, people will vent their anger and see that there is always light at the end of the tunnel.”
Cooper previously commented on the genesis of Fight The Fury, explaining, “I am so pumped about the release of Fight The Fury! This is a side of me and my music that I don’t get to show very often. It takes me back to when I first heard metal and the reason I fell in love with music. It’s raw and unfiltered and emotional.”
Cooper continued, “Fight The Fury is for all of the fans out there who like the heavy side of Skillet, but want a super heavy album. I hope they feel the emotion of the songs that we have put together because this project is for them.”
While the Grammy-nominated Skillet have proven to be one of the most successful rock bands of the 21st century, having sold more than 12 million units worldwide, Cooper wanted to flex his creative muscles outside of his main outfit with Fight The Fury. The music crackles with a metallic, anthemic, and riff-driven intensity, along with unforgettable hooks. The songs that populate Still Breathing will take up residence in your brain for days at a time.
Fight The Fury will embark on their first-ever tour in Russia this December — see attached itinerary. Details regarding future North American tour plans will be announced in the coming weeks.
STILL BREATHING TRACK LISTING:
“My Demons”
“Dominate Me”
“Still Burning”
“I Cannot”
“Lose Hold Of It All”
FIGHT THE FURY ON TOUR:
12/2 — Glavclub Green Concert — Moscow, Russia
12/3 —  Cosmonavt — St. Petersburg, Russia
12/5 — Podzemka — Novosibirsk, Russia
12/6 — Teatro — Tomsk, Russia
12/8 — Vagonka — Kaliningrad, Russia
12/9 — Re:public — Minsk, Belarus
12/11 — Atlas — Kiev, Ukraine
FIGHT THE FURY IS:
John Cooper — Vocals/Bass
Seth Morrison — Guitar
John Panzer III — Guitar
Jared Ward — Drums
FIGHT THE FURY ONLINE:
https://www.facebook.com/fightthefuryofficial/
http://twitter.com/fightthefury
http://instagram.com/fightthefury
http://flyt.it/FTFYouTube