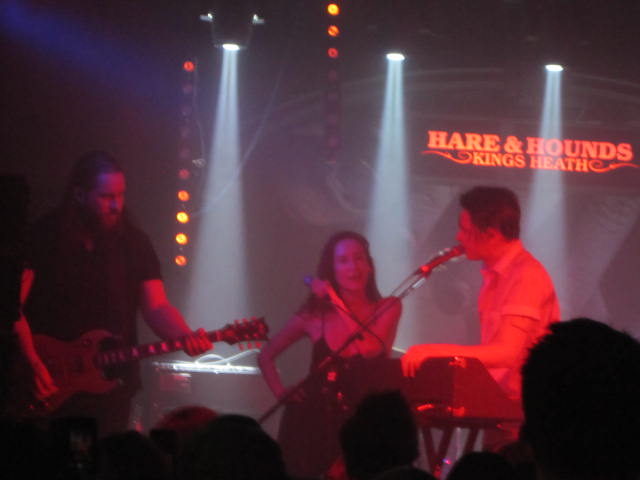 Having been lucky enough to have reviewed and loved the band`s recent release “Touch” last September, I was really looking forward to seeing them flesh out the superb songs from this offering.

The brilliant “Push + Pull” follows with Leah’s and Peters vocals balancing each other out wonderfully.

“Gentlemen”, “Guns & Ammunition”, “Johnny + Mary”, “Headsick”, “Now I Know” and Strange Habit quickly follow before we get another cracker from last years “Touch” in the form of the magnificent “Beck + Call.” This track starts with a drum beat reminiscent of the Glitter Band`s “Rock n Roll” but highlights the wonderful rhythm powerhouse that keep this superb outfit ticking along in such an unassuming manner. So praise has to be given to guitarist Ian Docherty, bassist Josh Warburton and drummer Danny Miles for providing such a foundation allowing the front two to mesmerise the audience.

It may have been during or after the next track “Blood + Honey” that Leah gets a young lady called Joanna, from the audience to braid her hair.

The pace of the show doesn’t let up and we are offered “I’ve Rationed Well”, before “Picturing Love” Peters gruff grinding vocals almost scream the down and dirty lyrics of this track. Partway through, Leah’s haunting vocals grow from a gentle background noise to challenge her partner with her own brand of sleazy lyrics. The song continues with the two singers bouncing off each other and together.

“My Neck”, “Uninvited” and “The Garden” continue the lively pace before the rocky strange “Paper Girl” closes out the show.

We get a one song encore in the form of the title track of the last album with “Touch” but by this time most people are spent but sated after this highly energetic seventy minute performance.

There is a real chemistry and tension between this young David Byrne meets Michael Hutchence lookalike and his very sensual combatant and they are ably backed by some masterful musicians.

Yes there are influences and inspiration from the likes of Nick Cave, Tom Waits and Arcade Fire but saying that this band are very much ploughing their own furrow and they can certainly deliver in a live setting.

I remember seeing another wonderful Canadian band called The Tea Party in a similar sized venue before they went on to worldwide success so the signs are definitely there for these guys.

This was a cracker of a show and I`m sure when these guys end up playing stadiums a lot of people will be saying I was there.