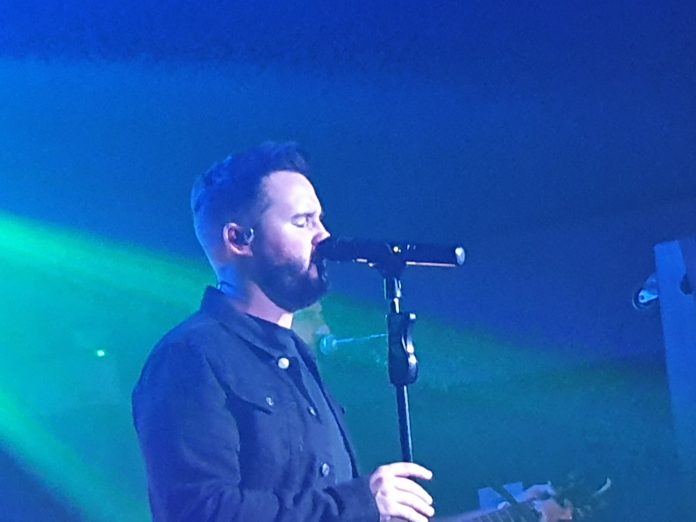 Right at the end of the set tonight. The last show of their biggest UK tour to date, Andrew Kavanagh, the ebullient singer of Keywest, shuts his microphone off to sing the last couple of choruses of “This Heartbreak”.

The track is one of a clutch that they play from their just released “Ordinary Superhero” record. As they play it, and his brilliant voice fills the room, you realise they are going back to their roots. The one time buskers, who are now Bonafide stars back home in Ireland, have still got it in them..

But then, something else happens too. Slowly, but very surely, the crowd joins in. And you see them swept along, and its at that point you get it. Ok, the throng here tonight isn’t the biggest, but it will be. One place at a time, one audience at a time, there is something about Keywest, that you can’t ignore.

What you can do – with the greatest respect to the band – is basically forget what their record sounds like. “….Superhero” is a cracking little album. It’s gentle and beguiling, and after a few listens it really hits home.

Live, Keywest are a different proposition. Heavier, more in your face, but at the same time, happy to do things at their own pace. Whether that’s the drums at the end of “Carousel”, where Kavanagh and lead guitar player James Lock add extra percussion, or Kav’s stories to explain the tunes, this is not what you might have expected at all.

They open with the opening track from the new album. “Somebody To Love”, and there’s a nice swathe of harmonica here. Many of its best bits are aired in the almost two hours they are on the stage too. “C’est Le Vie” feels like an important one, given that its lyrics about focussing on the good things seem to inform the whole of, not just the record, but the night as well. It is all over songs like “What Are You Waiting for?” That’s for sure.

There is no doubt, either, about the highlight. “Apple Tree Hill” from one of their earlier albums is prefaced with a genuinely funny yarn, but man, when Lock does that solo (and apparently, he began playing it by accident at the start of the tour) you can’t fail to think this band is special.

A medley of Bob Marley songs is better than it might have been, but “All My Mistakes” – their breakthrough moment back home – is better, as is “Something Beautiful”.

It is past curfew time when “…Heartbreak” is over, but they don’t seem the type for encores anyway. They are just blokes enjoying playing on stage (witness the impromptu cover of “Under The Sea” sung by drummer Harry Sullivan in the middle, which a grinning Kavanagh films on his phone). They are very, very good at it too.

A measure of them is that as soon as they finish they appear at the door to shake hands with the punters. One of them says to the singer “Kav, what’s that famous street in Dublin? Well, we saw you busking there and we’ve loved you ever since…..” That seems to sum it up neatly. Because part of that busker mentality, that talent combined with feet on the ground has obviously never left Keywest.

One of the more heartwarming evenings of music you’ll see.