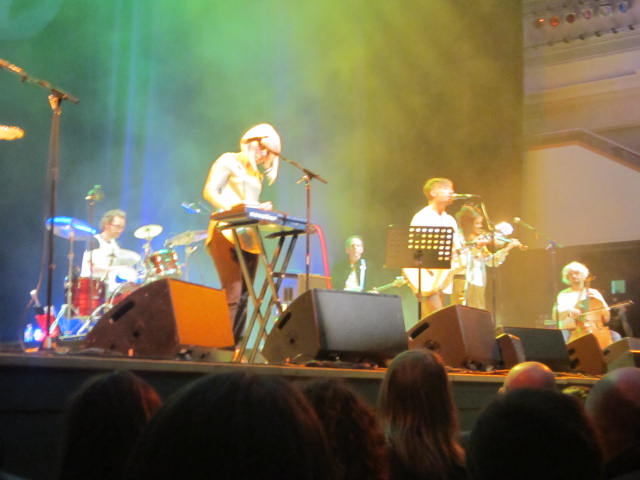 If you thought Creosote was something you put on your fence, then allow Damian to explain….

Billed as Astronaut Meets Appleman after the artist’s superb recent release, tonight it was Birmingham’s turn to enjoy the talents of Mr Kenny Anderson otherwise known as King Creosote.

The new album explores the tension and harmony between tradition and technology – between analogue and digital philosophies and tonight the first part of the show is given over to the album in its entirety.

The gig kicks off with the breathtaking “You Just Want” and I must admit I had a lump in my throat as I’ve wanted to hear this song live for so long and it was performed so elegantly, with some wonderful backing vocal harmonies from the female band members. The more upbeat “Wake Up To This” follows, the guys behind me are rocking away in their seats and even KC acknowledges this, confirming that it was the best sitting down dancing that they had witnessed on the tour so far.

The ironic “Love Life” is dedicated to the actress Scarlett Johansson, who unfortunately for Mr Anderson wasn’t attending tonight. The superb seven piece backing band comprising of Double bass. Electric violin, drums, synth, keyboards, guitar and cello perform an instrumental as KC climbs into the audience and persuades a young lady to join him in a dance at the side of the seated area.

The remaining songs from the Astronaut album “Betelguese”, “Faux Call”, “Peter Rabbit Tea”, “Rules Of Engagement”, “Melin Wynt” and “Surface” are played out. “Peter Rabbit Tea” being an instrumental with Anderson holding a crackling recording of his child’s voice up to the microphone as the band perform.

“Melin Wynt” is explained as the Welsh for Windmill and KC seems to have a theory about wind turbines and their destructive nature, which he shares in some amusing anecdotes. As the final song concludes the band is encouraged to remain on stage and hide behind their instruments.

Lomond Campbell from tonight’s support act Modern Studies, joins the troupe to lead the singing on “The Lengths” before “Bats in the Attic”, an audience request is shared.

The evening concludes with the songs “Carry on Dancing” and “Star of Hope” and everybody is left suitably sated and wearing satisfied smiles after enjoying such a excellent night’s amusement.

How would you describe King Creosote, well possibly Electro–folk with a Scottish lilt, I really don’t know but I can assure you that you will experience a tremendous evening’s entertainment if you make the effort to attend. Long live the KING