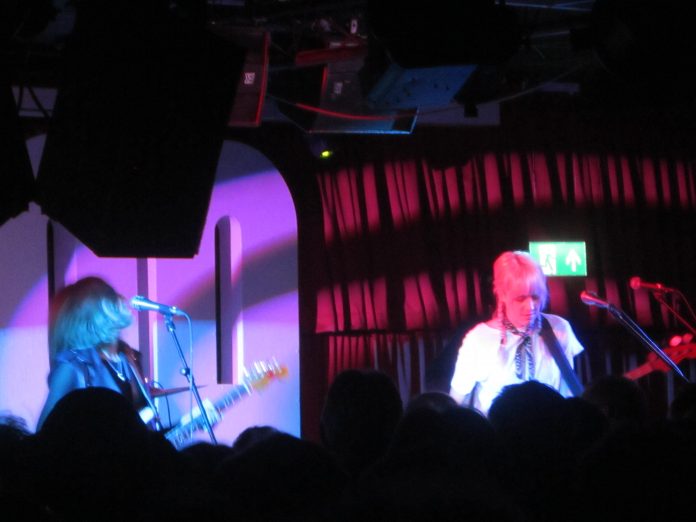 A favourite of mine `Trouble In Mind` quickly follows before a brief hello and a thumping version of the Ram Jam band`s 1977 hit `Black Betty` a song attributed to Lead Belly is shared. A new studio record “Venom and Faith”, their fourth, was released at the end of last year and we get to hear the wonderfully sleazy `Bleach Blonde Bottle Blues` from it. Megan picks up her slide guitar and pair aided and abetted by Tarka Layman on bass and drummer Kevin McGowan give us a couple of Blues inspired numbers. The first the delightfully unnerving ` Look Away` and the latter a cover of Son House`s `Preachin` Blues`. A rousing version of the track `Freedom` is shared before another couple of cuts from the last release come, with a song about relationship uncertainties in `California King` and the haunting `Honey Honey` The traditional gospel call and response song `John The Revelator` is sandwiched between. The band jam out on `Black Echo` before presenting a cover of Skip James`s `Hard Times Killing Floor Blues` The band have always supported a number of causes and one close to their heart is the stigma of Mental health, their grandfather suffered but was never diagnosed in his lifetime and with this in mind, they play `Mad As A Hatter`

Rebecca seems a little nervous as she reveals that they have written a track in honour of Stevie Ray Vaughan called `Laurel Land` as it`s Laurel Land Memorial Park, Dallas, where this guitar maestro is laid to rest. The song has never been aired live so she`s worried they`ll screw it up. Nerves are overcome and the tune is shared with some wonderful lyrics, “Laurel land is where i`m going, Heart Of Texas, Yellow Roses” amongst them. A real treat for this appreciative crowd to hear this unrecorded song given it`s debut. The evening closes out with the heart breaking ballad `Might As Well Be Me`, a track about the place where the siblings grew up `Blue Ridge Mountains` and the rock out `Wanted Woman / AC/DC` The band leave the stage and return to play a sort of acoustic version of the Robert Johnson classic `Come On In My Kitchen` This was a pretty varied evening`s entertainment, we had a few covers, some older cuts, more recently well written tunes and a totally unrecorded track. The musicianship was second to none and the vocal harmonies at times were sublime. A much bigger venue awaits Larkin Poe next time they visit this city. As Annie Lennox and Aretha Franklin said these sisters are certainly doing it for themselves.