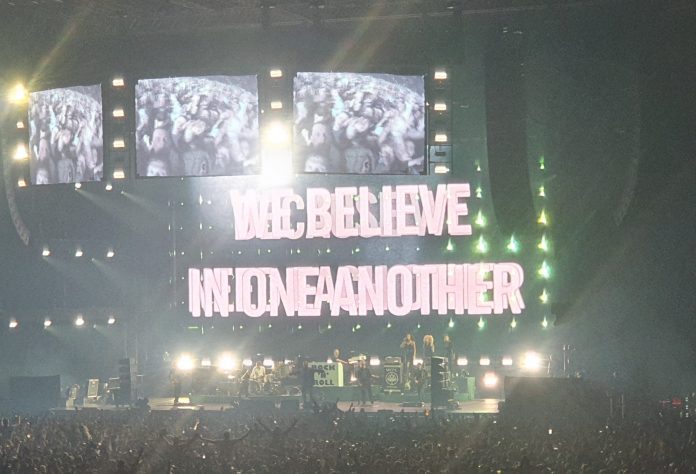 Liam Gallagher, you have to concede, has a point here. It’s too many people looking at last night’s setlist and making assumptions. “You silly billy’s” he says. “Those silly billy’s that left.”

They did too. He’d done “Champagne Supernova”. That was meant to be the last song. It was last night, apparently. But the internet, you see it knows jack shit. Tonight it’s: “Cos you’ve been nice and jumped up and down and that, we’re gonna do another one…..”

But before that, let’s go back three hours or so. Sydney’s DMA’s were added to this bill late. They are welcome visitors, though and any time you get to see them is just fine, whether you planned to or not. Live, with their beefed up band and beefed up sound, they are just about unstoppable. Tommy O’Dell has one of the great modern voices and while, lets not kid each other, there is a lot of Brit Indie of the 90s in their sonics, the way they use Johnny Took’s acoustic is totally innovative, and ensures that “Dawning” soars. A new album is due next year and the new single “Silver” whets the appetite for it magnificently, and old favourites “In The Air” and “Time And Money” prove why people are so excited about them in the first place. It is interesting to watch them here, because when I’ve seen them before, it has been in front of their own rabid fans. Here, they have to win over a huge star’s audience. And with “Delete” they do just that. This is all part of their education. And when they are headlining a venue like this DMA’s can look back and say they paid their dues. 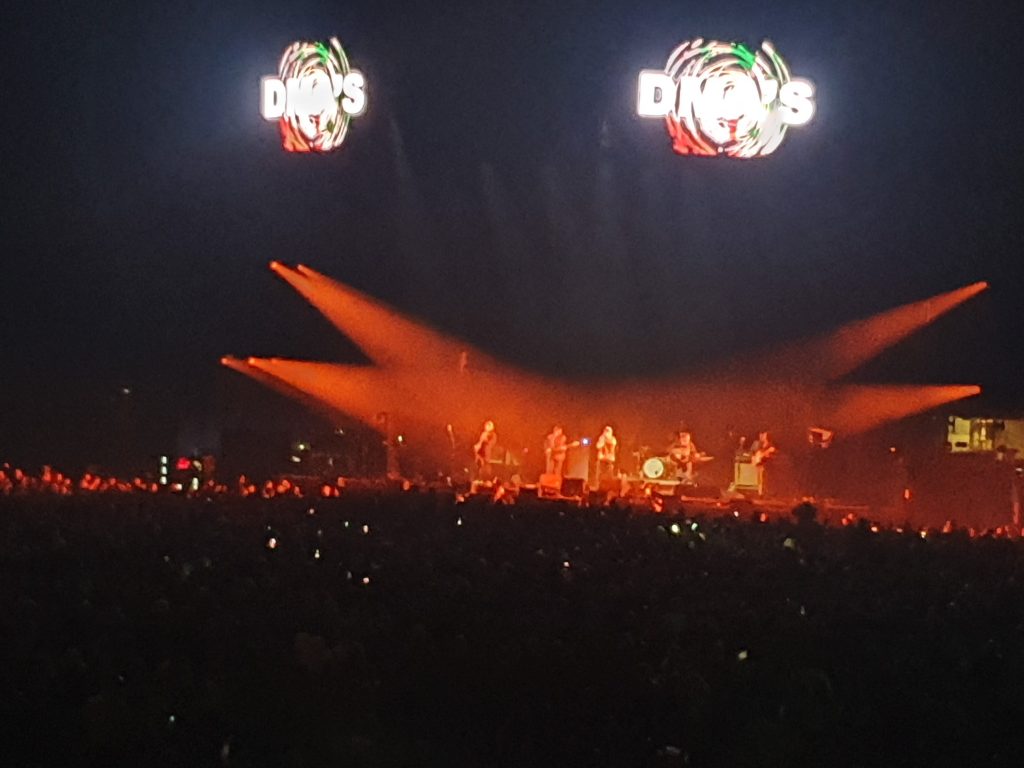 So….back to the “Rock N Roll Star”. He’d started with that. He’s not messing about here. Liam Gallagher has just released “Why Me? Why Not” and it’s a mighty collection. And he’s got some songs he can sing from that other band he was in……

As such, what follows the “we’re gonna do another one” was “Cigarettes and Alcohol”, which is about as anthemic as it gets.

That said – and yes, rightly –  although there is a truckload of Oasis stuff here tonight, there’s enough solo stuff too. “Thanks for buying “Why Me? Why Not” when it came out,” he’d said earlier in the set, it saves me becoming a nostalgia act and means I can come and sing to you,” and that is surely his dilemma. As proud as he is of Oasis, he is equally, I am sure, desperate to play his own material.

“Halo” and particularly “Shockwave” go down superbly, while “Wall Of Glass” from the previous “As You Were” record has the 15,000 crowd bouncing in unison.

He basically does it that way all not, some Oasis (and he’s got Bonehead with him too to play them), then some of his own. And the second “lap” of Oasis, if you like, is an absolute belter of a 15 minutes. “Morning Glory”, “Stand By Me”? They’ve aged not a jot in 20 odd years and even the kids that weren’t born when they were released are singing for all they’re worth.  That’s how you get to fill arenas, after all. You have a legacy and songs that connect.

What Liam Gallagher also has is a magnetism. Why he’s a great frontman you could debate all day, but that he is one is absolutely beyond question.

Pattern now established he’s back to his solo stuff. The new album’s title track comes over really well, as does “Be Still” which sees his son Gene join them on drums, and his presence adds extra muscle to “The River” too.

“Do you know a song called “Gas Panic” he offers, in that laconic way, and we are into the home strait. From here it might as well be an Oasis gig. “Wonderwall” is meant to be the first last one, but the first encore has “Acquiesce” in (and makes for a soulful outing for the backing singers) and “Roll With It” and “Supersonic”. The latter is odd, because I remember buying that record almost a quarter of a century ago, just after it came out,  hearing it thinking “those lyrics are ridiculous” and somehow not being able to resist it. That’s still the case in 2019.

Which brings us back to “Champagne Supernova” which is where we came in, or where people left, take your pick.

Liam Gallagher, then: he’s still a rock n roll star. He’s got that something. And he’s got some great songs of his own, and great songs to sing from his past.

Put it all together and it makes for a special night.