Lyrically I don’t think the band are looking to pick up any Pulitzer prizes but what they lack in literary prose, they make up in musical intensity with their fast and furious metal assault. Tonight`s set is culled from the bands two albums “Abominator” and “As We Die” with `Abominator`, `Beast Like Me`, `Headhunter` and ` Cemetery Sexxx` almost being spat out. In between songs frontman Alex “Wolfman” Story tried to invest some humour introducing each of the songs as “This is a love song, that you can dance to” which became wearisome as the set progressed, The slow burn of `Witchcraft` and the almost 50`s parody of `We Belong Dead` broke up the pace before the set closed out with `Kiss Me As We Die`, the amusing `Dreaming Dead Girls` and more powerful `Hope Hell Is Warm` with drummer Wade Murff and Brandon Strate on bass coming to the fore. There were no Misfits covers in tonight`s set so maybe Doyle Wolfgang von Frankenstein is trying to distance himself and allow his own band to grow, which to me has to be applauded. 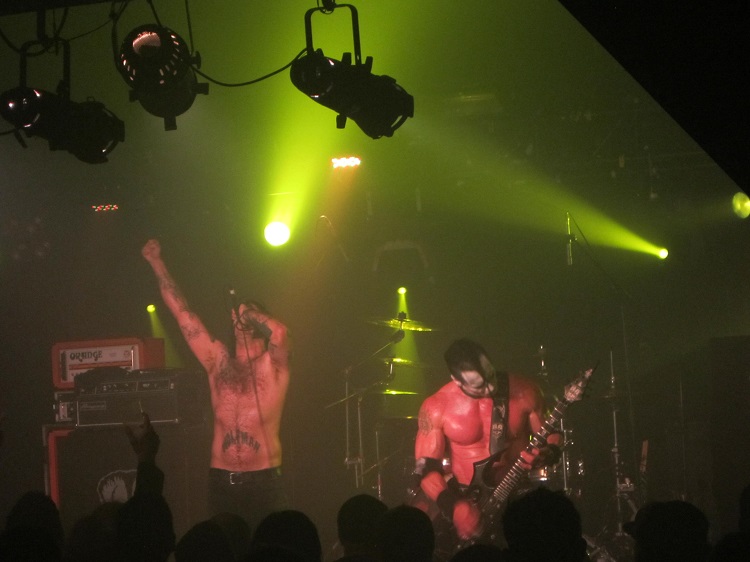 I`d never seen Life Of Agony before, something always clashed so I was quite looking forward to tonight`s gig. How would you describe Life Of Agony, well take all the best bits of Type O Negative, Machine Head, Alice In Chains and add in a little Metallica and Black Sabbath and mix it up. In other words, you can`t. Their debut album “River Runs Red” was hailed a masterpiece of alternative rock. A concept album, that told the story of an unnamed troubled Brooklyn teenager who attempts suicide to escape the pain of his existence. Indeed, it was listed at number 58 in Rolling Stone’s 100 best ever metal albums. Their latest release and sixth studio album “The Sound Of Scars” acts like a sequel to the debut, kind of part two. The band hit the stage and it`s straight into `Scars` from the new release with it`s compulsive chorus of “Scars. Are what we are”. `River Runs Red` and `Bad Seed` quickly follow and this exuberant crowd are singing, shouting along with every word as they are bouncing up and down. There`s a nod to the past with `Other Side Of The River` before `Blackheart` another cut from the new release is shared. The sound becomes a little fuzzy and distorted as the superb `Weeds`, `Lost At 22` and `Eliminate` are offered up but the band soldier through it. The highlight of the night for me was the heart breaking `My Mind Is Dangerous`

The show progresses with a heavier aspect with newer tracks such as `Method Of Groove` and `Lay Down` before closing out with a trio from their debut album in the form of `This Time`, `Underground` and `Through And Through`

This New York quartet has experienced highs and lows throughout their career with splits, line-up changes and reformations but the current alignment of originals in singer Mina Caputo, bassist Alan Robert and guitarist Joey Z along with new drummer Veronica Bellino seems to have brought some stability to the band. The band appear more at peace and this certainly shows in their electrifying performance. Here`s to a brighter future for life Of Agony