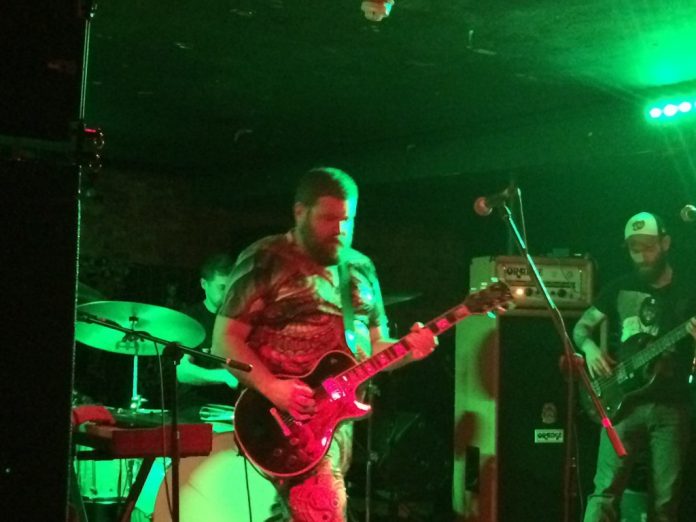 Lionize roar. And no one tells them it’s too loud.

Worcestershire’s instrumental band Black Asteroids only need two men to make their most agreeable racket. With Simon Donovan pounding the bass and Chris Allen doing likewise on the kit they make a really interesting brew. A tripped out, fuzzy sound sees them lock into mighty grooves, and closing tour de force “Saturn” showcases an outfit made up entirely of a rhythm section should have. All this is topped off with a xylophone solo, which if nothing else shows the multi-faceted talents that Black Asteroids have.

Stafford based trio Camulus have clearly picked up on the instrumental vibe as their first number is delivered without just big ol’ riffs for company. Elsewhere guitarist Louis is also the singer and the second tune, complete with catchy chorus, is full of youthful passion. It’s on work like “Hall Of Mirrors” where the band can really show their talents though, and the outright NWOBHM touches elsewhere are the calling card of a band who couldn’t care less about genre constraints. As if to prove this, they launch into the quasi punk of “Guns Of Naverone” and display a deft swerve between funky and heavy on new song “Sri Lanka”. With bluesy songs and the closing “Gringo” – which is part sea shanty and part spaghetti western – also in the mix, there’s a feeling here that Camulus are still chucking everything against the wall to see what sticks. The fact that most of it does is testament to their clear ability.

The message is clear enough before they’ve even started. “We are gonna have a good time tonight, no matter what”. What Lionize singer/guitarist/Wavy Gravy impersonator Nate Bergman (dressed in the best tie-dyed onesie we’ve ever seen) is doing is dealing with is the elephant in the room that you could, well, get an elephant in the room. No matter, Maryland’s (second) finest, are here to prove they rule. They do. New song “Anacostia” is so good they chuck it in early, the funky “Breather” with its wonderful Hammond organ and bass jam is superb.

And whilst no one could impersonate Maryland’s finest, then the conventional wisdom is that Lionize are a kind of Clutch with keys, but those keys, and the way Chris Burns deliverers them, make Lionize very much their own band. The feeling that, given half the chance, they’d turn into the Grateful Dead and just jam all night is never too far away and when they do let themselves go as on the mellow reggae of “Sea Of Tranquility” they are debunk all those lazy comparisons.

Yes, they can rock as hard as anyone around, as on “Evolve” and “Replaced By Machines” but Lionize are blessed with so much more. Occasionally they meld all their different parts and become incredible, as on “Dr Livingstone” which is infused with a real life here and sounds somehow mightier than on record.

Just before they finish their hour here with “Dream Wizards” – a track from their EP released late last year – the thought flashes through that Lionize might be a band with as fertile an imagination as there is out there. They are also one who knows how to survey a crowd of this size and retain a nice line in self-deprecation: “I like this room, it’s like a party in my living room” offers Bergman. “Only without my mom telling me to turn it down….”

And that, however good you are, simetimes is Thursday night rock n roll.