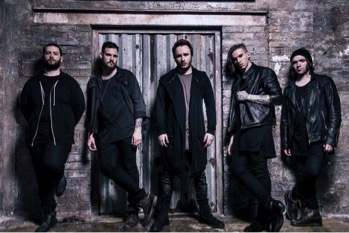 As Lions have unveiled the lyric video for their brand new track ‘Bury My Dead’ – taken from their debut full-length album Selfish Age, out January 20 via Better Noise Records. The track is a punishing dose of British metal, with a chorus that keeps in line with the band’s effortless ability to produce stadium size tracks.

Of the track, vocalist Austin Dickinson says, “’Bury My Dead’ is a song about leaving your past behind you. It’s very close to my chest because, in starting As Lions and beginning this new adventure, there were a lot of things that I had to leave behind, both as a musician and as a person. I think the same can be said for all people, in all walks of life. In our existence, the only constant is change and sometimes we have to say that final goodbye to the burdens that can no longer teach us or push us. That’s one of the many ways in which we grow. I had so much fun writing this, and I truly hope you enjoy blasting it too!”

Selfish Age is the follow-up to As Lions’ debut EP Aftermath released earlier this year. Produced by award-winning producer David Bendeth (Of Mice & Men, Paramore, Bring Me The Horizon) and Kane Churko (Five Finger Death Punch, Disturbed, In This Moment),Selfish Age is an illustration of the band’s mission to create “the biggest, baddest hard rock we could, and on an almost cinematic scale”.

Having already played sold-out shows in the UK, As Lions have also recently left their imprint on the States during a US arena tour with Five Finger Death Punch, Shinedown, and Sixx:A.M.