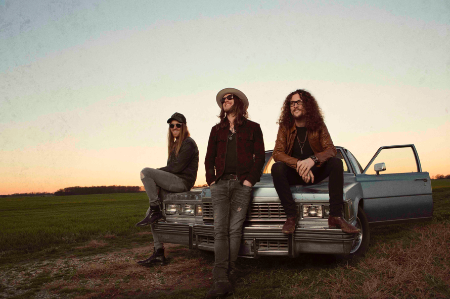 TC3 Stop by Abbey Road
THE CADILLAC THREE have released the video for ‘Graffiti’, filmed live at the legendary Abbey Road studios. The track is the first in a series of videos to be released which includes ‘White Lightning’, ‘The South’, ‘Running Red Lights’ and ‘Peace, Love & Dixie’, all recorded at the historic North London studio.
After their electrifying feel-good performance at last weekend’s Ramblin’ Man Fair, The Cadillac Three’s long awaited new album BURY ME IN MY BOOTS, will be released next week on August 5th via Big Machine Records. You can pre-order the album here.

In the build-up to release, the Nashville natives have been teasing the album with the staggered release of new tracks including ‘Graffiti’, ‘Soundtrack To A Six Pack’ and the latest single ‘Drunk Like You’, an infusion of country and rock, and a testament to the band’s well-known love of a hard-rockin’ good time. The album also features their 2015 hit single ‘White Lightning’, which was playlisted at Radio 2.

Comprised of Jaren Johnston (lead vocals), Neil Mason (percussion) and Kelby Ray (lap steel), The Cadillac Three were named as ‘Best New Band’ in the 2014 Classic Rock Roll of Honour Awards and became the most played new band on Planet Rock in 2015. Rolling Stone claims, “Like Kings of Leon before them, they’re poised for their first big break in the U.K. — where they’ve sold out every headlining show for nearly two years — before conquering their U.S. home turf.”

Having established a loyal following in the UK with multiple sold-out headline dates, The Cadillac Three will be returning to the UK for their Don’t Forget The Whiskey headline tour later this year. Tickets are available now through Live Nation.