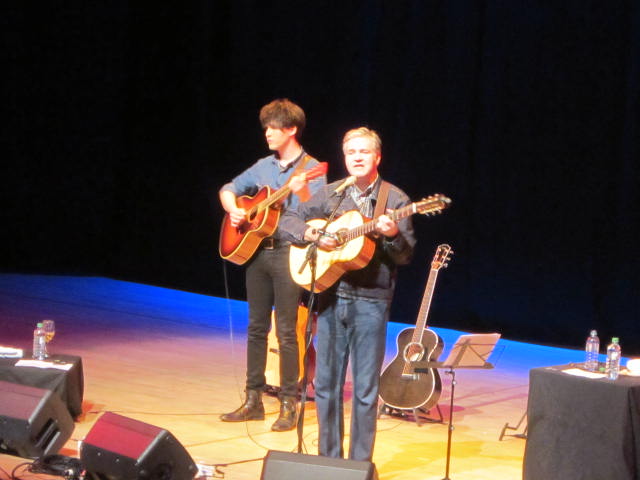 In the first fall of snow at the end of 1984 I managed to slip over and break my ankle. Whilst laid up at home my colleagues made a collection and asked me what long players I wanted. One of the choices was a young band called Lloyd Cole and the Commotions and their debut release `Rattlesnakes`.I really liked the mix of rock pop, indie pop and the wry observations on love and life.

The show kicks off with indeed a track from that 1984 debut with ` Patience` followed by a track from the follow up album with ` Perfect Blue` before the single `Rattlesnakes` is shared.

Cole has a very dry sense of humour and when a few late arrivals slink into the venue he offers that if you follow him on twitter the show commences at 8 pm. He is the support for tonight’s act, which later will be himself.

The tour is billed as The Classic Lloyd Cole Songbook 1983-1996 so although he released three albums with the Commotions his solo output of around ten albums is the focus this evening.

`Loveless`, `I Didn’t Know That You cared`, `Love Ruins Everything` and ` Lonely Mile` quickly follow before the wonderful `Pretty Gone` is played out ending with a snippet of the Beatles Norwegian Wood.

Lloyd tells us that if we are expecting the hits they will come but are spread out as it’s a two hour show and there wasn’t that many of them… Nevertheless, whether they were hits or not the singles `My Bag` and `Jennifer She said` are offered with `Butterfly` with more than a snippet of Leonard Cohen’s Famous Blue Raincoat and `So you like to save the World sandwiched in between. This concludes the first half of the performance

The second half of the show is a little more up tempo and the artist is joined by his talented son William on guitar and the resemblance to a younger Lloyd is uncanny.

We go back to the debut release and share another four tracks with `Are you ready to be heartbroken`, `Charlotte Street`, `Perfect Skin` and `2cv` with `Cut Me Down` slid in between.

`Undressed`, `Four Flights up` and `Hey Rusty` are sung before the show concludes with the superb `Brand New Friend` and who can forget the line “Walking in the pouring rain, walking with Jesus and Jane` and to top it off a refrain from David Bowie’s Heroes is added in.

The encore comprises of the singles `Lost Weekend` and `Forest Fire` and a quick bow from Cole senior and junior and a get home safely and that’s two hours gone by.

The show made me appreciate what an intelligent songwriter this fella is and the marvellous tunes that he’s released. Most of the Rattlesnakes album was played so I for one was really happy.

This was a fabulous show and was presented in a very unassuming way. You could almost say it was played with no commotion.