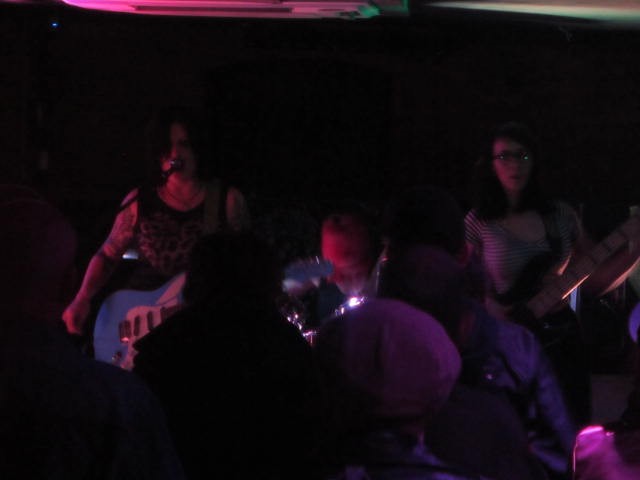 UK Feds, are a punk-ska band from Worcestershire, with some catchy tunes in the set with the likes of “Desert Holiday”, London Town.” Add in  “Living in London” and there seemed to be an obsession with the capital city and a song about signing on called “The Papers” Rock with a reggae tinge. I didn`t realise until later that most of UK Feds were a band called Shooze until last year. I got to see Shooze supporting Adam Ant in Warwick and I commented then that I thought they sounded like a young version of the Ruts. They still are.  A short but most enjoyable set.

I enjoyed seeing Louise Distras earlier this year, when she graced the room above as guest to Ashes to Angels. She performed a few songs acoustically that night, so I sort of knew what to expect. This time around she is part of a three-piece female troupe. After a quick hello and we are treated to half a dozen songs from her debut album Dreams from the Factory Floor. They include “Stand Strong Together”, “Shades Of Hate”, “No Mercy”, “Love me the way I am” which highlights Louise`s pleading voice, “Dreams from the Factory Floor” a spoken word, poem, part eulogy and part rant and “Story Is Over” which reminded me of the best that Courtney Love has to offer.

New songs are shared with “Outside of you” and “Run with Wild Horses” which was full of rawness and power and was dedicated to the New Generation of Love. Louise is promoting a recently released single entitled “Aileen” which explores the dark story of ‘America’s first female serial killer’ Aileen Wuornos. It’s a song that sees her questioning rape culture and the sanctity of life. ‘Aileen’ is living proof – if ever it was needed – that pop music does not have to mean ‘dumbed-down’ or ‘throwaway.

As she put it, the song was written: “One night after a show I watched the Nick Broomfield documentary ‘Selling of a Serial Killer’, which is about America’s first female serial killer” about the same subject. As someone who has worked with the homeless and victims of sexual assault, Aileen’s story hit me pretty hard but left me feeling inspired to share it through my music.”

It`s a pretty unnerving and unsettling subject but this artist doesn`t shy away from the more disturbing or troubling issues of life. The song is a pretty in your face rock out as well. The wonderful “Bullets” closes out the set and Louise rekons that this is the first night and first show with the band and introduces us to Zoe on bass and Violet on drums. The adrenaline seems to have kicked in and the show is not over yet. Louise treats us to a few numbers acoustically. “Black Skies” a reggae tinged offering. Then “Hollywood Dream” and a song where she encouraged the audience to sing along, The final track is dedicated to the opening act Louie Raw who she compared to a young Jello Biafro.

With that she launched into “The Hand You Hold” and was ended with girls re-joining Louise part way through. This was a really enjoyable show from this impassioned firebrand singer-songwriter. I said it last time I saw her and hope she accepts it as a compliment but I really do believe in Louise that we have Wakefield`s answer to Billy Bragg.