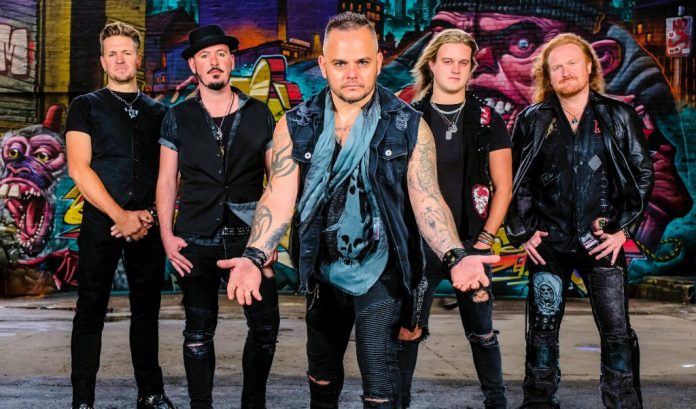 Bouncing back from a financially devastating tour situation, GIN ANNIE, announce a new single and video PLUS their maiden UK headline tour.

High-octane hard rock band, Gin Annie release Love Ain’t Here, the lead song from their eagerly awaited debut album, 100% Proof. The single is available on Facebook Watch, YouTube and as an exclusive download to all those that pre-order the forthcoming album.

They also announce their maiden UK headline tour running through January and February 2019. Tickets are available via See Tickets and direct from the venues.
https://www.seetickets.com/tour/gin-annie-100-proof

The Wolverhampton based band were recent victims when a rogue agent in Germany declared bankruptcy, leaving the guys stranded just 5-dates into a 25 date European tour as main support to Diamond Head.

Singer Dave Foster, said, “It was emotionally and financially devasting. We invested thousands of pounds paying the agent for tour logistics only for him to have not paid the tour company. After just 5 shows we were told to go home. Simple as that. Absolutely nothing we could do at the time. Now we are trying to chase him through the German courts. At this point we have no idea if we will succeed.”

Within hours of the news a GoFundMe page was set up with Gin Annie fans donating over £2,500 to help mitigate for the losses.

Dave, continued, “To be honest, it has taken us a while to pick ourselves up mentally but it has been our fans that have helped us carry on. Seeing them reach into their own pockets to help us is extremely humbling and restores a bit of faith.

So, we are carrying on, we have our debut album to release on 25 January and now we are thrilled to announce our first headline tour. And because there were other bands on that European tour who also suffered losses, we are delighted to say that STATEMENT from Denmark will be joining us as main support on this run.”

100% Proof will be released through Off Yer Rocka Recordings on Friday 25th January 2019. It is available for pre-order now with all those doing so receiving LOVE AIN’T HERE and 3 other songs as an instant thank you. https://www.pledgemusic.com/projects/gin-annie

100% Proof was produced and engineered by Jay Shredder and recorded at Shredder Live Lounge.