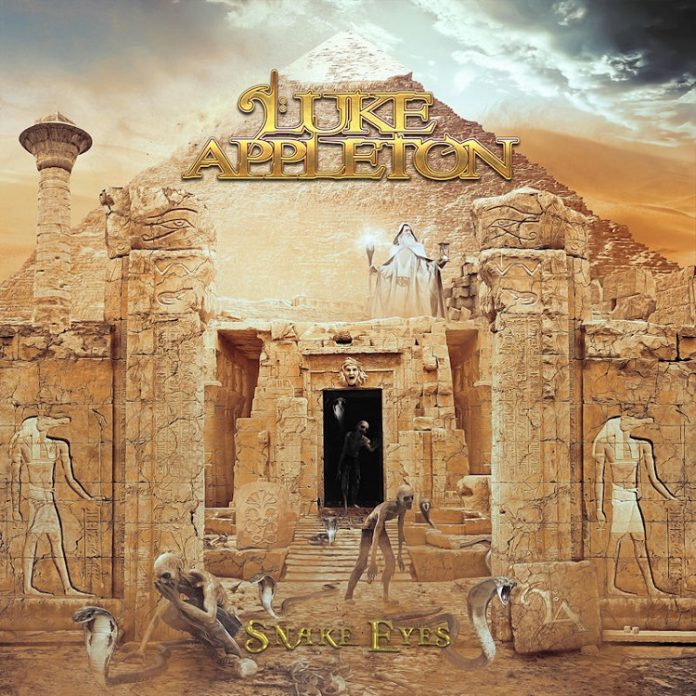 I don’t necessarily want to fall out with the good people at Apple Music, but when I put “Snake Eyes” on my iPod, it gave it the usual genre classification.

Now, that might be a nightmare to some, conjure up images of James Taylor and some West Coast LA thing to others. That’s not “Snake Eyes” though.
The cover, like some cross between “Led Zep IV” and “Powerslave” is enough to let you know, but it’s clear as day from the outset.

This, my friends, is acoustic metal, whatever Apple might think.

Luke Appleton is steeped in metal. I have been watching him since he was in the brilliant Fury UK, then he went to play bass for Iced Earth – as well as guitar in Brit stalwarts Absolva (the band Fury UK became).

Just like if Steve Harris decided to make an acoustic record. It just is ingrained in metal, naturally.

“Snake Eyes” is the full length follow up to “How Does It Feel To Be Alive?” EP  that was released last year. The fact it is an album “proper” as it were, allows for a more nuanced collection than that one was, and there is some real twists here.

“Medusa” just about restrains itself from going full-on Dio, but is an example of the superb songwriting here, the title track is better still, and might just be the best thing here, with its slower attack, and the solo is a wonderful touch.

“First Star” is another slice of superb music – and one that you really might not expect. Medieval folk, almost as Theresa Smith of Metaprism duets to mighty affect.

“Heart Returns” boasts the type of sound that will be both welcome and immediately recognisable to Absolva fans, “Crocodile Tears” is the sort of thing that bands in the 80s and 90s would have turned into a power ballad – think Skid Row “In A Darkened Room” – but this isn’t that sort of record and although the lead – courtesy of brother Chris – pierces here, it is stripped down and not overblown.

A skilled musician. It is nonetheless surprising, perhaps how much shade this works in. “Storm Broke From My Heart” for example, sees Rishi Metha play lead to take this somewhere new. “Walkers” on the other hand, manages to sound a little grandiose, almost prog, which is balanced by the gorgeous sounding “The Other Side”.

“Slay The Hydra” (trust me, I listen to a lot of acoustic music, its not often called “Slay The Hydra”)  manages to be heavy,but then, just when you think: “blimey this sounds like Iced Earth” you realise it’s because Gene Adam, their original singer is doing his stuff.

“Man Of A Thousand Words” happily adds some wind instruments to the mix, and ends a collection (there’s a bonus track with a live version of the title track of the EP) in a fashion that makes good – yet again – on Appleton’s hopes for the thing.

In an interview he said simply: “I wanted to create something that is much more than ‘just an acoustic album’ and I feel I’ve succeeded in that goal”.

To be fair, that is unnecessarily modest. “Snake Eyes” is quite simply a superb collection. Acoustic, yes (mostly) but nothing like you might think.