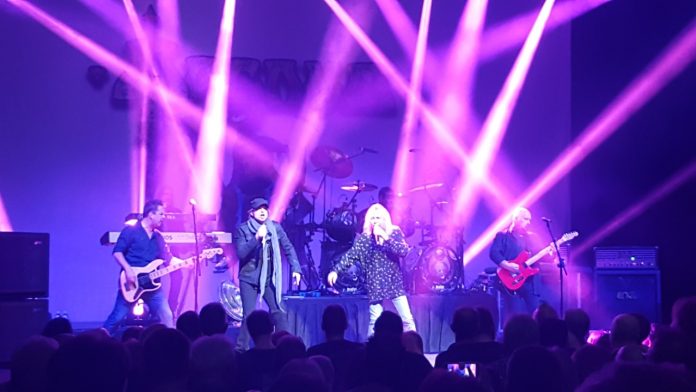 The irony of the March concert at The Town Hall being frozen and snowed off only to be rearranged for what has turned out to be the hottest day of the year is not lost on the fans, Rebecca Downes who is again the support band, or Magnum themselves.  Relocating the gig to The Symphony Hall is a real feather in the cap for the band and whilst Sir Simon Rattle might be the conductor most associated with this iconic venue, none have conducted as long as Bob Catley has conducted the Magnum faithful who are out in force tonight.

Much to my shame I was unaware of Rebecca Downes, until the original announcement she was to be the support on the tour and judging by the feedback on the Magnum Facebook page she did a great job, so I was keen to see what the fuss was about. Right form the first song the rhythm is obvious as they are by now a well drilled band, mixing songs from her new album as well as the previous one and the EP, the set list has just the right pace. ‘Sailing On A Pool Of Tears’ is understandably her mum’s favourite track and has some scale to it. The long standing backing band are tight and do justice to the songs, ending the set with ‘With A Little Help From My friends’ which she dedicates to her fans. If you’ve not yet seen her then go along to The Slade Rooms in May; you’ll be in for a treat.

For much of my life I’ve answered the eternal question ‘What was the first band you saw?’ with Blue Oyster Cult at The Brighton Centre on 1st November 1979, until one day the penny dropped that technically it would have been the support band. And that support band? Magnum.  The early to mid-80’s was when the band hit their commercial peak with the quartet of albums ‘The Eleventh Hour’, ‘On A Storyteller’s Night’, ‘Vigilante’ and ‘Wings Of Heaven’ culminating in their two nights at the Hammersmith Odeon, the gig on Friday 13th May ’87 being broadcast on the Tommy Vance Friday Night Rock Show – and I was there.

Over forty years later the band is still going strong and opening with ‘When We Were Younger’ you can tell by the smile on Al Barrow’s face that this is going to be a special occasion.  The most recent album dominates the early stages of the show and honouring his promise after the cancelled March, Tobias Sammet from Avantasia returns to duet with Bob on ‘Lost on The Road To Eternity’. Rebecca and Steve Birkett also join the band to add backing vocals on the radio friendly ‘Without Love’.

The quality of Tony Clarkin’s songwriting is self-evident as it’s 45 minutes into the set before we have the first songs from that era, ‘How Far Jerusalem’ and ‘Les Morts Dansant’. The anthemic nature of the songs has Bob leading the fans in mass arm waving as they kick into ‘Show Me Your Hands’. Not that the fans needed any encouragement.  ‘All England’s Eyes’, ‘Vigilante’ and a truly epic ‘Don’t Wake The Lion (Too Old To Die Young)’ bring the first set to a close.

Returning to the stage for the encore the band play the emotive ‘The Spirit’ and it’s really good to hear the band playing a rocked up version again after a number of years playing the stripped down acoustic version, before they finish with ‘When The World Comes Down’, a song that could only be a set closer.  If you want to send a crowd home singing their hearts out to an upbeat song, is there a finer chorus than: There are times it’s hard to swallow/When the world comes down on you/
May it shine on you tomorrow/And your dreams, they all come true.

The band originally planned on filming this gig for a DVD however due to “issues” it was instead being recorded for a live CD.  If you weren’t there, then whether you’re a lifelong fan or a newcomer to Magnum, then I’d suggest that the CD goes on your essential shopping list.