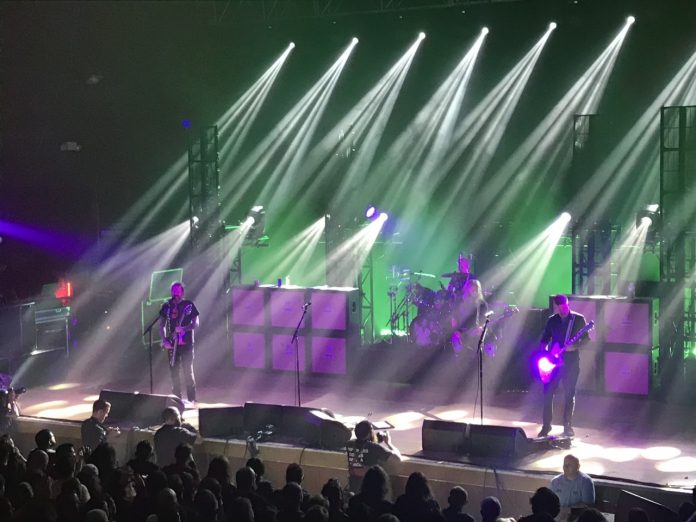 A study on the power of the riff

During his lengthy post-gig speech, Mastodon drummer Brann Dailor announces that he considers Red Fang to be one of the “finest live bands I’ve ever seen.” Whilst MV wouldn’t go that far, we will say there is something special about the Portland foursome. Often touring with tonight’s headline act, they are as unflashy and unfussy as it gets, yet for all the lack of razzmatazz, they are completely compelling. Riffs just fly at you from the get-go. “Hank Is Dead”, the wonderfully catchy, “Throw Up” and “Blood Like Cream” have landed, gone through customs and got their luggage before you even have chance to pause for breath, but in truth it isn’t the type of night for reflection. David Sullivan gets an incredible guitar sound on “Wires” and what they lack in words Red Fang more than make up for with quality. Some people struggle with showmanship, and not everyone could be Paul Stanley or Bruce Dickinson if they tried. That is evidently the case with Red Fang’s nominal frontman Bryan Giles , but as they end with “Prehistoric Dog” then it absolutely doesn’t matter. Red Fang are a mighty proposition, who deserve total credit for doing it on their own terms.

Those words, could, if we had wanted, been the conclusion to the Mastodon section of this review too, and perhaps that is the reason they mesh so well with the support?

Whatever, the first time we saw Mastodon was over a decade ago opening for Slayer and Slipknot on an Unholy Alliance Tour bill, completed by Hatebreed. If its fair to say they didn’t quite fit in then, it is perhaps true to say that they still don’t. They do their own thing and they evolve, taking their crowd along with them as they go.

Sure, they are a big deal now, with the light show to prove it, but you just know that deep down, they do that because they have to, and MV is willing to bet that if they were given half a chance Mastodon would just plug in and play their songs without the need for fanfare at all.

And the thing is they’d be superb at it too.

For 90 minutes here, they keep those that want to be enthralled rapt in attention, and the kids down the front who want to get in the pit have the time of their lives. That is their gift. They are a heavy metal band first and foremost – but no one is quite like Mastodon.

Much of tonight comes from their recent “Emperor Of Sand“ album, but only after “The Last Baron” from the incredible “Crack The Skye” album has kicked things off. The new stuff, though showcases their unique skills perfectly. “Sultan’s Curse” sees their three distinct vocals intertwine. “Show Yourself” is as dry as dust, “Precious Stones” is a wall of guitar sound, and the one that Dailor sings, “Steambreather” is a real highlight.

If, as they always (quite rightly) do, Mastodon delve into their recent vintage head-first, then this is a career spanning set. The instrumental “Bladecatcher” is thunderous, the multi-layered “Oblivion” greeted like an old friend, and “Black Tongue” proves what a fine album “The Hunter” was.

Like the band before them, there is no real excess chatter (until after they finish and someone gave their drummer a mic). Indeed, before “Ember City”bassist Troy Sanders suggests he “had a speech prepared, but….” They don’t need it. They just need music like the closing “Blood And Thunder”. That speaks more eloquently on their behalf than anything else ever could.

As their most natural evolution continues, Mastodon remain one of the most intriguingly original bands that metal has to offer.