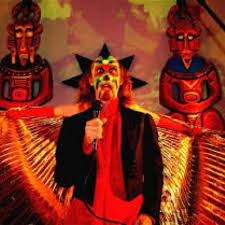 Donnie gets an audience with the god of hellfire himself as Arthur Brown stops by for a chat.

“It’s like a community” muses theatrical rock pioneer Arthur Brown when quizzed about his influence on  bands and artists over the past 40+ years.

It’s well known that performers such as Alice Cooper, Peter Gabriel, Bruce Dickinson, Marilyn Manson and Kiss would not be the artists they are today were it not for spending many hours in the company of Mr. Brown either personally or via his eclectic back catalogue and unforgettable live performances.

At 73 years old he is probably in a good position to evaluate his unintended hold over some of rock’s royalty and where he stands in the pantheon of great artists of the past 50 years.  Not that the man himself would willingly put forward his thoughts on the subject.  Far from blowing his own trumpet you would be lucky to even get him to admit he has a trumpet!!

However, when the evidence is placed before him it’s tricky for him to deny that, whether he intended to or not, his mark on music has been well and truly stamped.  It’s a legacy that will continue on for the next 50 years as the artists he inspired then inspire the next generation and on and on it goes.

Arthur is keen to show his appreciation for the “inspired” artists who do not forget the influence he had on them.

“People like Bruce Dickinson (Iron Maiden vocalist) and Alice Cooper have always played me on their radio shows, which has keeps bringing me back in the public consciousness and introduces my work to a host of listeners, who perhaps would not normally think about listening to my work.  It’s great to get that interaction with new fans and helps to keep thing fresh, just like the band.”

“People generally think that if Bruce or Alice likes it then perhaps it’s worth listening to.”

The corridor behind the stage at Rock City, Nottingham, whilst headliners Hawkwind  play, may not be the most inviting of places to hold an interview but Arthur is happy to chat anywhere.  One hour earlier he and his brilliant backing band had performed a 45 minute set that thrilled all in attendance.  It’s impossible not to be impressed with his energy, humour and talent.

Many artists of his vintage would be flogging themselves on greatest hits tours, if they hadn’t given up the rigours of touring years ago.  Brown though relishes his career and has a vitality of a young artist with everything to prove.  Take, for example, his latest album, Zim Zam Zim, which was originally done via a PledgeMusic campaign last year and then fully released this year.

It shows that the master of creativity and invention is not frightened to explore new avenues and opportunities to get his music heard.

“It’s a great way for an artist to interact with or his or her fanbase and it opens up a world of new possibilities. It gives the artist more freedom and that is a good thing.   I like it and it’s worked out very well for me” he advised.  “Although, I don’t think it will always work for everyone.” he cautiously pointed out.

Brown’s 45+ years in the business has allowed him to build up a mightly impressive back catalogue, not only of solo work but also Kingdom Come, Hawkwind and countless other collaborations.  One collaboration that never made it to the recording stage was his one with the late Vincent Crane and a certain guitarist by the name of Jimi Hendrix.

Crane unfortunately suffered a nervous breakdown in the late 1960’s that prevented the band becoming a real group that would have rivalled The Grateful Dead in the freeform jamming stakes.  The sessions would go on for hours with Hendrix regularly occupying the spot of bassist rather than his normal lead/rhythm guitar.  Brown remembered those days fondly and inparticular the connection that he and Hendrix shared.

“It was a wonderful time, full of creativity and passion with no rules.  Who knows what could have happened.  Unfortunately after Vincent’s illness we never got it back together and it just remains a wonderful memory”.  It would have been a visual and musical  experience backed by tapes of Wagner!” Asked if there is any rehearsal footage or audio in the volts, very possible considering the slew of Hendrix releases of late, Brown advised. “I don’t think so………..but you never know”.

Also to make it just that more tantalising the rest of the band would have been made up from Jimi’s band The Experience.  Oh, to have heard them all play together.  Talk about a supergroup!!

Whilst it’s nice to reminisce occasionally Arthur is more focused on the present and the future.  His stunning new album Zim Zam Zim is a powerful statement of intent from an artist often not given the credit he deserves.  The album stands up against anything released in the past few years and sees Arthur at his most beguiling and lyrical.  On his website he describes Zim Zam Zim as thus:

In his hours of leisure, ZIM ZAM ZIM loved to enter the unknowableness. There, he would sometimes, for his own amusement, appear to himself as all galaxies, all suns, all stars. At others he would spend, it seemed, eternities as one galaxy or another. Or he might take on existential forms of which we can give no description. Occasionally he preferred to rest in and as the unknowable.
Another option was to remain in the unknowable, but make soup, watch a galaxy, pick his nose, Or perhaps make love with whomever the flow of his unbounded imagination presented to him as a willing companion in the adventure.

Listening to the album evokes the vibe of a latter day Tom Waits, with the odd inflection of Bowie and Zappa thrown in for good measure but it is all uniquely Arthur Brown.

“I’m very proud of this album and I’m very excited by the talent that I have to work with.  There are many cultures and styles that have influenced me and at certain points that comes across in the album.”

If it’s the balladeering musings of “Light Your Light” or the dirty stomping Howlin’ Wolf-like “Junkyard King”, or the Nick Cave-isms of “The Unknown” it’s all delivered with the power, subtlety and panache of a voice that has never wavered and a maverick spirit that yields to no-one.

Arthur and his Crazy World band have plenty of live shows before the end of the year and then after a very short break Arthur returns to the stage for a speaking/visual performance tour.  A evening of tales backed by regular dancer Angel Flame.

“There will be plenty of stories but I also wanted to add something different and give a visual interpretation of my life so far which is where Angel comes in.  I’m looking forward to it.  It should be fun and stimulating.”

Given that anything Arthur has done since “Fire” was released in 1968 has rarely been anything else that interesting, thought-provoking and challenging and I would think that an evening in his company will be an essential diary event for 2015.

For all Arthur Brown news go to http://www.arthur-brown.com/

Thanks for the interview go to Ben Hylands at Inspired Artists Agency, Jevon Beaumont (bassist and tour manager for Arthur Brown) and, of course, the man himself.  A visionary, a poet, a creator, a voice and a gent.