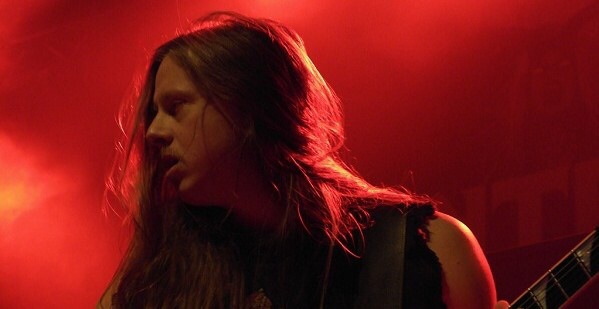 Huntress guitarist tells us why we ain’t seen nothing yet, baby. And gets told off for talking too long

Biographies and decades have lied to us it seems. Backstage at a gig, so the media would have you believe is all groupies, sex and drugs. Sitting backstage with Blake Meahl,one of the two guitarist from Huntress, it’s a world away from “The Dirt.”

Huntress are due onstage on less than two hours, but the supremely laid back six-stringer doesn’t appear to be in the least bit perturbed. Actually the whole vibe is pretty serene and chilled. A couple of members of Savage Messiah, tonight’s openers, are sitting on a sofa chatting. There’s some press waiting to do interviews, and there’s a hum of quiet activity.

The backstage area in Leamington’s Assembly is notable for one thing. It’s not so much a case of the Elephant in the room as the Caravan in the room here, because – and MVM admits it’s not done research into this – this dressing room is surely the only one in the land to have an old style, vintage gypsy caravan sitting right in the middle of it.

“Yeah it’s very weird!” Exclaims Blake. “Mind you, we haven’t seen inside, Jill has commandeered it for herself….”

Right on cue Jill appears. Jill, as you may know, is Jill Janus, singer in Huntress, she is a classically trained singer, who was a DJ with a passion for metal. “She came to watch the band we were in before Huntress play one night,” explains Blake. “And long story short, she poached us and the rest is history.”

Janus has a presence, a kind of magnetism is evident. She is also – it’s seems – the band organiser. Marching straight over to the two or three hacks that are waiting their turn she says: “Ok, you are with me. You can go to Blake when he’s finished.” Then shouts over to our table: “Blake don’t be long, we’ve got stuff to do!”

The guitarist, who’s smile is never too far away, grins. “It’s ok, there’s plenty of time yet,” he says to MV, before explaining that when they formed the band, he was unaware just how talented Janus was: “I thought it’d be a nice little project, with this girl singer, and I could get my metal fix somewhere else. Then we got in the studio, and we could all see that this was the only metal I was going to need.”

It was immediately clear with the bands full length debut “Spell Eater” that Huntress weren’t your conventional metal band, and much of that is down to the singer, capable of high, almost operatic stuff one minute and then a low, almost serpent like hiss the next, it makes for a genuinely unsettling and captivating listen. The guitarist though, has a slightly different take on things: “We haven’t even scratched the surface of what we can do yet, believe me!” He says bullishly. “Jill loves [Heart singer] Nancy Wilson and she’s got that nailed down. I want to bring that side out on our next record.”

Ahhh yes, the next record. Album number three you feel is a big one for the band, and although he doesn’t actually say those words, you get the sense that Meahl agrees: “We’ve brought in Jim Rota [ex Fireball Ministry] as part of the production team, and it’s going great. He has similar beliefs to us in the way that records should be recorded in that he likes to do them as live as possible and not go over and over things on computers changing things and whatever. I am in a band that wants to play live. good luck to the guys that make music on computers, but that’s not for us, and it’s not for Jim either.”

So far down the road are they at recording the record, they are ready to play some tracks live. A couple of hours after he tells us that he’s pleased with how they are going, Huntress add a couple into their set, “Flesh” is particular sounds like it might become a real favourite. The record is scheduled for a spring 2015 release and Blake reckons that when it’s out they will be back over here again: “I think we almost have to,” he admits. “Europe in general, and England in particular, picked us up before the US, and although America is starting to catch up now, there’s still a feeling that you guys get us.”

That might be because the Huntress sound owes a lot to the NWOBHM stuff of the late 1970s early 1980s, a fact that Meahl is perfectly happy to acknowledge: “Look, I love the classic stuff. Priest and Thin Lizzy are my absolute favourite bands, but you can’t just copy them. You have to make your own mark.”

Content to be called a metal band in the Classic mould, don’t dare give Huntress another label. For the only time in our chat, Blake becomes animated at the thought: “We are a long way down this road,” he says. “Metal is metal, it’s all been done, now you’ve got bands out there saying [adopts high pitched voice] ‘oh yeah dude, our sound is post black metal core or whatever.’ Shut up, man! Don’t give yourself such self importance.”

The band have been frequent visitors to these shores in the last few years, with this jaunt comfortably the longest. Taking in a proper length-and-breadth of the UK thing the way bands always used to, the Californian admits that he’s never heard of most the places they are playing in: “I mean, Leamington Spa what’s that,” he laughs. “I thought I was gonna get a massage or something!” As a native Midlander MV feels duty bound to point out that we are in the hometown of Razzle from Hanoi Rocks, a fact that Blake seems taken aback by. “But everything is so clean and tidy here,” he laughs. “How did all that sleaze come from here!” There is however one place that he’d love to play, that he hasn’t. Dublin. “It’d be really cool to do the tourist thing there and get my picture taken with Phil Lynott’s statue,” he smiles. “You should never forget why you started playing music in the first place.”

Playing music while being on tour, he says, is the best part about the job. Except that is, for one thing: “leaving home, man. That’s always tough.” Assuming this is a family thing, we ask if he manages to keep in touch with loved ones while abroad. He laughs: “no, it’s not that. It’s just a hassle. I rent a flat when I’m back, then when it’s time to tour again, I just pack up all my crap, put in storage and go back out again. It’s such a pain!”

With that Jill Janus comes purposefully out of the caravan again. She’s ready for her next interview. “Blake you are done! Can it!” she shouts over in a manner that suggests she’s not in the mood for being trifled with. The man who stands to her left a little later on on the evening shakes his head: “How does she do an interview in four minutes?” He asks rhetorically, as MV packs up its stuff and someone gets a bottle of water out of the fridge.

Maybe this is what happened at the Whiskey A Go-Go circa 1996. Possibly.