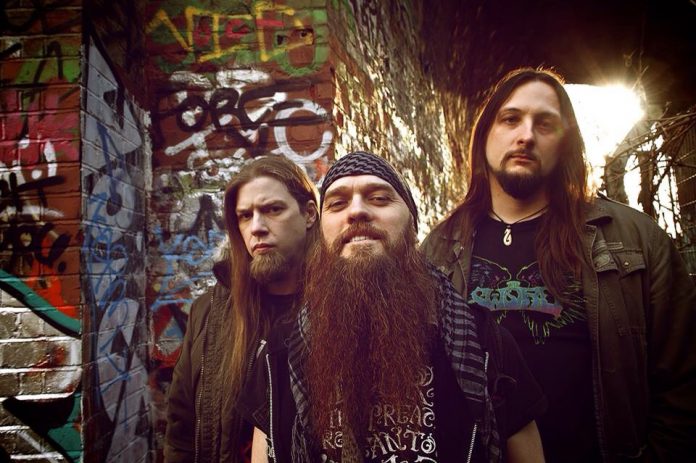 With their magnificent “So Flows Our Fate” EP out today, we take the opportunity to talk to singer/baritone guitarist Bones about it

Stoner rock is typically slow-to-mid tempo and features a heavily distorted, groove laden bass-heavy sound, melodic vocals, and “retro” production. The genre emerged during the early 1990s and was pioneered foremost by the Californian bands Kyuss and Sleep.
Wikipedia

Molasses (American vernacular), or black treacle (British, for human consumption; known as molasses otherwise), is a viscous by-product of the refining of sugarcane or sugar beets into sugar.
Wikipedia

When you call your band Morass Of Molasses and that band is ostensibly a “stoner” trio, it does seem that the die has been cast. It seems like you’ll follow every stereotype in those Wiki entries above – and if you did, everything would be just fine.  But then, every so often, along comes a band that takes your preconceptions and likes to mess with them, just for the kicks.

On their EP, out today, Berkshire’s Morass Of Molasses, make a stoner sound quite unlike many others.

When you put this to Bones, the man who fronts this particular mind-trip, he’s pretty dismissive: “All stoner ever was,” he says, “is heavy blues. That’s where it comes from. I just like confounding expectations.”You can say that again.

MoM are on tour to celebrate the release of this quite brilliant four tracker. In typically contrary fashion, the record isn’t released until the end of the run, this, though, wasn’t part of some grand plan to mess with us all: “No, definitely not,” says the friendly and talkative frontman. “Our aim was to get it out to coincide with the start, but there were delays at the production plant, and a few other things so it’s got to come out at the end of the shows.”

The band are around halfway through this tour. MVM is speaking to Bones a couple of hours before the band are due onstage. We are upstairs in what passes for a quiet corner of Scruffy Murphy’s – a pub in Birmingham that is made for this type of thing. The mid-evening drinkers are already enjoying themselves, and there’s metal pretty loudly on the jukebox. It’s the first time the band have played here, and their singer is looking forward to it: “It’s just great to be on tour,” he says. “Whilst I’m very proud of the EP, and I love all the songs on it, I think the best place to see us is live. Each show is like a release for us, you’ll see it tonight, our drummer Chris, people always say he’s the happiest drummer in the world! He just loves beating that kit! And Paul, he has a great sound on his guitar, and I just don’t know what I’m going to say onstage half the time!”

Bones is the most experienced member of the band and undoubtedly the leader, he’s toured in bands, promoted gigs and runs a very small record label: “When I formed the band, I said to the guys, ‘I’m gonna make most of the decisions, but you just trust me, and we’ll get it right.'”

This extends to the bands total DIY approach. On their own label, with no manager, no booking agent and no hangers on: “People approach us to work with us,” he explains, “but we’ve never seen anyone who can add to what we do – except the press agent we are using for this release – and until we do, we will do everything ourselves.”

Even if you didn’t know Bones was in a band, even in this pub filled with heavy metal fans, and most with a certain look. He has an aura about him that says he’s destined to succeed. Impressively bearded – think Billy Gibbons but longer – he’s confident, but it’s more than that. There is a look in his eye that says he believes entirely in MoM.

In the 18 months that the band have been in existence the goal has been simply to get the record out. “All our funds up to this point have ploughed back into the band. Studio time costs, getting the record made, that costs, we’ve funded all this ourselves,” adds Bones, proudly.

Even this tour is designed to meet another aim. “The money we make on this tour,” he explains, from behind that facial hair, “will go to making the vinyl of “So Flows Our Fate.” We need a vinyl out. Everything about us is geared to vinyl.”

Including, it seems, the next recordings. Most bands would be resting on their laurels. That doesn’t seem to be part of Bones’ plan. The band have already written three songs for their next release, which will, says Bones, “be a mini album of six tracks, we’ve thought of it with vinyl in mind, there are some long songs, so maybe three on each side.”

Ahhh yes, the songs. Veering from monumentally heavy to quiet in the blink of an eye. Even this, it seems, was reasoned: “I wanted people to go a journey with us,” explains the frontman. ” I wanted this band to do things you weren’t expecting a stoner band to do. That was a big part of what we tried to achieve. I mean, don’t get me wrong I love it when people come up to us after gigs and go ‘fat riff dude!’ But you’ve got to keep it interesting too. It’s got to go to different places.”

Listening to Bones – sitting in a Black Keys T-shirt and telling us about a band called Elder that he loves and wants MVM to check out – talk about his music, the passion he has for his craft is totally unmistakable. He has an interesting take on this: “It’s quite simple,” he states. “If I’m not passionate about what I do, how can I expect other people to be? I want to articulate to people just how proud I am of what we have done.”

Fast forward until 10pm that same evening and the band appear onstage. They are magnificent, and Bones lives up to his word, the onstage chat revolves around sex mostly, but doesn’t seem rehearsed, in contrast to the band. He’d earlier told us: “Man, we rehearse hard, we work hard on this, we push ourselves, that way we can have fun onstage.” And that really comes over in their performance. Morass Of Molasses are anything but the archetypal stoner band, who looks at their shoes, mumbling, Bones is a rock star and he seems to know it.

He admits it’s been tough work to get the band to this level, but as you’d expect he’s ready to put the long hours in. From Reading, the band, he says initially met some resistance in their hometown. Best known, in metal terms, for melodic death metal bands like the brilliant Sylosis and Malefice, there wasn’t room for a stoner crew. “Yeah we were told there wasn’t a stoner scene in Reading,” smiles Bones. “So we went and started one!” That resulted in the monthly club night, The Swamp, that the frontman promotes. “It’s been really cool, we are able to put bands on that we play with in the rest of the country. It’s becoming a real community, which is brilliant.”

In keeping with this DIY, nothing can stop us approach, even the way Bones says he will measure the success of the band is refreshing: “I think if it in these terms,” he explains, animated as his arms fly. “If we can release records, play to crowds, maybe tour in the U.S. Then that to me is success. I like to think of it like this – if you could replace what you did for a living with music, would that be success?”

Not that he plans to stop there. “It’s simple really. People like to pigeon-hole, tell you that you can’t do this or that, they put a glass ceiling up. I’m not having any of that, smash through the glass ceiling, there’s no limit or restriction as far as I’m concerned.”

What Bones was actually talking about there was his ambition. Unwittingly, he just described his band. Stoner be damned, there’s things to be done that don’t need constraint, and Morass Of Molasses intend to succeed. But it’s clear that success to them is only sweet when it comes on their own terms.