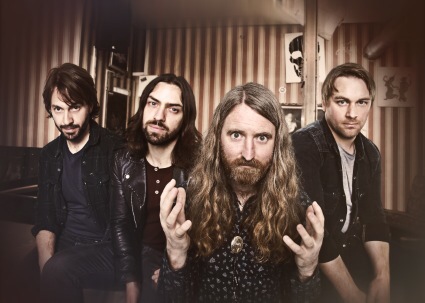 The Answer frontman on the need to take the pressure off this time around.

The Next Big Thing. Arguably, perhaps, the worst phrase in music. It should mean you have the world at your feet. It should mean arenas are going to be filled with your adoring fans in about five years after a little bit of paying your dues. Some bands take in their stride and laugh at the absurdity of it all. Some shy away from the whole thing and make a series of bizarre career moves (the Wildhearts, stop sniggering at the back, please), but there’s a third camp.

In this camp the band gets the accolades, it gets the big support tours, it releases a string of excellent records, but can’t break through to what we might term “the mainstream,” so they put pressure on themselves and, somewhere along the way, lose their focus.

Listening to Cormac Neeson a couple of years ago, around the time his band The Answer released their previous record, “New Horizon,” it certainly sounded like he felt like things were at a crossroads. In one particular interview, for Classic Rock Magazine, he was talking in terms of it being literally a make or break album for the band he formed in 2000 with a few of his mates. If this didn’t propel them to rock’s big leagues, he was saying, it might be time to call it quits.

MVM is talking to Neeson in advance of The Answer’s fifth studio record, “Raise A Little Hell” due out on March 9th. The singer seems relaxed as we chat away, so does he regret those comments? “No,” he says firmly. “It’s difficult, you feel the pressure, but you’ve got your A and R man telling you how you should go about things, your manager is telling you how to go about things, you’ve got your fans who are letting you know what they like and don’t like and before you know where you are there’s a record out.”

To understand these comments it might be best to rewind nine years back to 2006, when the “Rise” album came out. It might not seem it now, with the rise of bands like Temperance Movement, Blues Pills and Rival Sons, but back in the mid noughties, “Rise” with its bluesy, Led Zeppelin jamming with Free type vibe, was a breath of fresh air. It got The Answer noticed, it got them Classic Rock’s album of the year and a year or two later the band were the opening act on more or less all of the AC/DC “Black Ice” worldwide jaunt (a trip they documented on a brilliant album/DVD package). Then, despite not only this, but also the fact that the follow up records to Rise – “Everyday Demons” and the even better “Revival” – were superb hard rock, they were back playing the same 600 capacity club size venues they had done years previously.

The “…..Horizon” record, which Neeson says was intentionally aggressive in style and lyrical content, seemed to document a group striving for something, anything, to happen. The lead track on it “Spectacular” had as it’s chorus line “we could be spectacular,” for example, so is it any wonder that the record sounded quite so urgent? “We really felt with the last one that we wanted to break through to that ‘next level’,” confirms Cormac now as he recalls the time, “and perhaps that informed the record.”

So if that one was – for a time at least – make or break, what of the new one? The title alone indicates a more relaxed feel. Raise a little hell. It doesn’t seem like a band that is worried this time, does it? “It’s definitely a good time hard rock record,” laughs Neeson. “It was about the four of us as songwriters, sitting down, and almost getting rid of all that background noise from everybody else, blocking it all out and just trusting ourselves to make this record. We’ve been doing this for five albums now, we just had to remember that.”

New single “Long Live The Renegades” certainly indicates that there is a slightly different vibe this time around. Press Cormac on his take on the sound and he will only say that “the new one is a little more eclectic than ‘Lost Horizon’ but not quite as diverse as [Horizon’s predecessor] ‘Revival’.” But he is a little more forthcoming on the current music scene.

For a band that has always had a sound that was deeply entrenched in the past, it comes as something of a surprise to hear that Neeson keeps a beady eye on the current music scene, admitting: “I think you have to in this business, I think you always have to keep an ear out for what is going on.”

And those current trends are kind of interesting to the friendly frontman. It’s easy to forget now, but when “Rise” emerged The Answer were the only band doing this type of thing. So, given the plethora of groups that are bringing the 70s to a whole new generation, does he feel his band were trailblazers? With typical modesty Cormac brushes the question aside: “We made the only record we could make,” he says. “We played the music we loved.”

And it turns out the music that he grew up with too, smiling: “I was lucky that my parents had excellent taste in music. My dad had every single record that Free ever made, Led Zeppelin too, and of course being from Ireland there was all those wonderful blues and folk influences. As kids you’d come in from kicking a ball around and you’d put those records on.’

What’s more, if you thought Cormac might have a tinge of envy at the new crop of bands coming up and making retro cool, you’d be very wrong: “I think it’s great,” he says. “It’s great that there is a real scene now. It’s good for music and it’s good for the band. It benefits everyone.”

To coincide with the album release, The Answer are taking one of those new breed out as opening act. Norfolk’s dapper kings Bad Touch, it seems, made quite an impression on Neeson: “We played with them at Steelhouse Festival,” he tells us. “And they were straight over saying ‘we love your band’ and all this. They were really friendly and a great band. When it came time to pick openers they were the only choice we had.”

Such camaraderie isn’t always the way on tour, with Cormac confiding: “Sometimes it can be stand-offish and bands are in competition with each other, which is kinda understandable. We were like that a bit when we went out with Roadstar [now Heaven’s Basement] and Rose Hill Drive for our first proper headline shows, each band wanting to outdo the other. At the other end of the scale you have our shows with Tracer a year or so back, both bands sharing the same bus. That was a great tour, I prefer it like that.”

Neeson also loves being onstage: “It’s an amazing feeling, to know that people have come out to see you play songs you wrote. It’s very humbling and I don’t think we will ever lose that. We have to remember why we started in this business in the first place. You sometimes have to be that kid again, and just remember how fantastic this all is.”

Maybe he just needed to convince himself. After all, you forget, perhaps, just how long The Answer have been doing this. Nine years is a long time to be making records, but it does leave Neeson well placed to talk about the changes in the industry. The Answer are one of the lucky bands to have a record deal. “…….Hell” is their second release for Napalm, and the jovial singer admits he knows how lucky they are: “They’ve just given us another two album deal, so we are very fortunate, there’s not many that get that luxury these days.”

When the band first started, things were very different, as he happily recalls: “We were right at the tail end of the days when record companies used to throw money at you.” He pauses, laughs and says: “That was a lot of fun!”

Nowadays, of course things are not like that, and The Answer, in common with many bands, are going – at least partly – down the Pledge Music route. This fan funded way of doing things, made popular by Ginger Wildheart, certainly to start with, comes in many forms, as Cormac explains: “They can either fund your whole show, if you like, and get the album made that way, or you can do what we’ve done, and do cool things with the pre-release so that like people can get handwritten lyrics, we’ll play in your living room, all sorts of cool things. It’s great for fans and we can’t wait!”

Your overriding impression of the man is that Neeson is just a fan who is lucky enough to be onstage. Indeed, he claims there’s only ever one time in his life he doesn’t want to listen to rock n roll – and that’s when he comes off tour. “Yeah,” he ponders, “when you are back home after a trek around you don’t want to listen to loud stuff, then, you have to reconnect with a little bit of normality.” So what is it then, daytime TV, followed by The Chase and Pointless before tea? “Oh no, no,” he laughs. “Maybe a bit of Tom Waits or Bob Dylan.”

How nice it is to listen to the singer of one of Britain’s best bands talking in these terms this time around, seemingly comfortable with his life, with his music and with his band. Quitting? Not any more. Cormac Neeson is ready, willing and very able.

Raise A Little Hell is out on 9th March via Napalm Records.