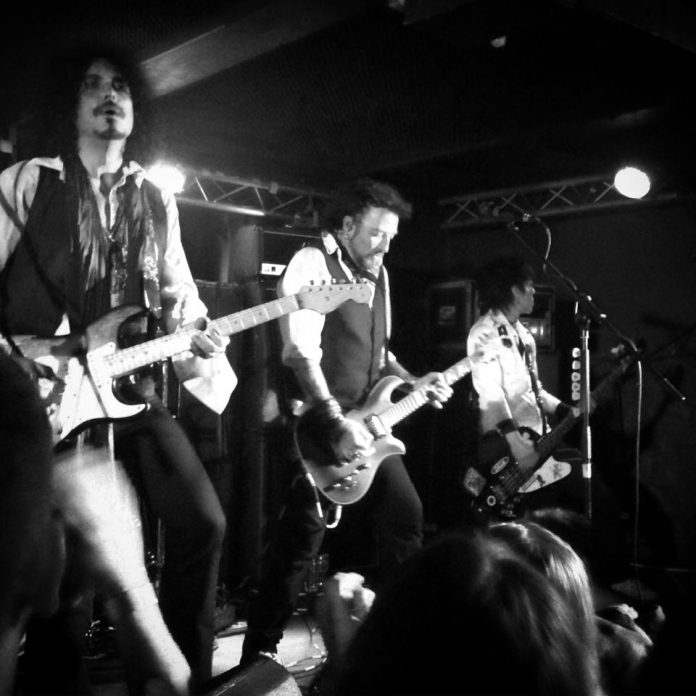 In fairness, even the rest of the band have the decency to look surprised at Toshi’s revelation. Indeed, it is Conny Bloom who is first to question the bass player. “What? Like real stuff?” he asks not unreasonably.

“Well yeah it was for blokes who couldn’t get girls, you know?”

There’s a second or two of silence, before:

“Cool, and cos it was online I’ll bet you could make ‘em look however you wanted, couldn’t you?” drummer Denzel is musing. “Not a bad idea that….

We’d perhaps, at this point, best rewind a few minutes. This whole episode had started with the simple question to The Ginger Wildheart Band of “any of the rest of you had proper jobs……?” It seemed innocent enough, the chatty and friendly Denzel had been a waiter (“until I spilt Carrot and Coriander soup everywhere and got sacked”) before Toshi changed the tone.

We are all sitting backstage in Wolverhampton about three hours before Ginger and the boys are due onstage and the mood is relaxed. Toshi quietly munches a fruit pot, while Bloom is the model of cool and charm.

It’s the man to MV’s left on the settee that is perhaps the biggest enigma, though. Supremely talented. A gifted songwriter, but also notoriously volatile, Ginger Wildheart has mellowed over the last few years. Quietly writing emails on a Mac when MV first arrived in the inner sanctum, his wife Jayne – also acting as Tour Manager here – ensures there is an element of calm that you suspect might not have been there a few years ago.

A man who still battles depression – a run of gigs late last year was cancelled when the black cloud descended again – but he appears relaxed and happy again as we talk. 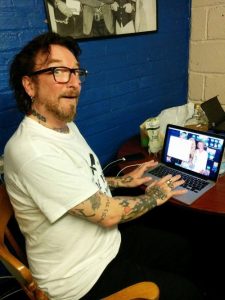 Maybe he’s just glad of the change of scenery. He’s been in the studio for a long time. Recording a new album from his Hey Hello album (the original plans for that were derailed somewhat when singer Hollis did a flit) and a follow up to the barmy “Mutation” record from a couple of years back. This tour is largely you suspect to get him out of that environment and back in front of people: “Yeah, it was time to go back out as I was frying my fucking brains”, he laughs. That’s perhaps why he won’t answer any questions on the future. Ask him what’s next and he says: “This. These shows are all that we are thinking about. The rest can wait until I am back home after its over.”

The people that will fill the venue when the doors open in an hour or so are the people that have stuck with him for over twenty years. At this point, MV had best declare an interest. For you see, we were sitting in the Exposure Rock Café in Birmingham back in the mid 1990s, waiting for a band called Sven Gali to play an acoustic set when a song came over the sound system. “Drags me round all day, just like a ball on a chain” went the first line. By the second we were asking the DJ what was playing. “A new band called The Wildhearts” came his reply and a love affair began.

That band enthralled like no other. Gigs were either brilliant or car crashes and although they are no longer going to make records, a fact that Ginger repeats here, they’ll do the odd tour and he still plays their songs, ask him if he’s bored of them and his reply is interesting: “I do think about not playing certain songs,” he admits. “”29X The Pain” [a B-side but fan favourite] for example, but then every time we play it gets such a reaction off people and I love that, it’s what I do this for. Why wouldn’t I want that reaction?” As if to amplify the point “29X The Pain” is basically a list of artists that inspired the singer but as much as MV wants to tell Ginger that we listened to every single one to see if we’d like any too (and discovered Jason and the Scorchers in the process) we opt to keep a touch of cool.

The man himself is in full flow anyway, waxing lyrical about the quality of the bill being all-important. This one sees TGWB out with the brilliant US pop rockers Ryan Hamilton and the Traitors and fast rising Yorkshire mob Massive Wagons. Both were handpicked for the tour by Ginger (“people tell me to check out this band or that band so I do”). His reasoning is simple: “I can’t understand anyone going on the road with artists they don’t like and a bill that isn’t strong. I’d never do it, and not enough bands give a shit about it. I want people to go home saying “god, that gig was good”, and after hearing three bands they loved. It should be show of the year. And from our point of view they are all great guys and it’s been brilliant.”

A couple of days before we talk, the tour had reached Newcastle Upon Tyne. Not only was this a home town gig for Ginger and Denzel, they were also joined by The Main Grains, the new band from Danny McCormack erstwhile Wildhearts bassist, a man who has battled his share of problems too. His former bandmate was happy to see him again: “Look there’s a shared history there, two lads from the North East who did what we did, yeah we’ll always have that.” And there’s Youtube footage to back up that good night was had by all.

This set of gigs marks another reunion too. This is the first time that Ginger and Conny Bloom have played together since the immense Silver Ginger 5 album and shows at the turn of the century. A lot of the set they are to play later is culled from it – a fact Ginger seems strangely blasé about, saying: “You just put a set together, I never really think about which album its all from”.

If neither man can remember an incendiary show just up the road in Dudley at the old JB’s venue, that like all the best Ginger gigs from that era snatched glory from the jaws of chaos (“man, we don’t remember a lot of that tour” grins Conny, with more than a hint of truth) they are more forthcoming about why they always seem to play this area. Ginger’s legendary Halloween extravaganza has made this room its second home, and he says “that’s all down to the promoters. They keep giving you good gigs in the area, and you keep coming back. I mean, take Dudley JB’s, it’s not there anymore bit a big part of why we kept coming back was Sam who used to run it”.

Which leads us neatly to the state of the music industry. Ginger has always been at the forefront of the internet and its advances. Starting with a thriving fan community 20 years or so back, interacting with fans via his legendary Ask Ginger section and now via Twitter, he was also one of the first to recognise the potential of Pledge Music and selling to your own fans direct. He’s modest about it, saying only. “The way to survive in this industry these days is not worrying about what’s going on, but to see what’s coming next.”

Conny Bloom, a man who had his share of hits in the Electric Boys back in the 1980s, says the hardest thing now is to sell records: “Writing a hit is tough these days” he opines, “basically because no one knows what a hit is anymore. A Producer friend of mine reckons that the trick to making a great album these days is to have a couple of real stand out tracks, a couple of less good ones – not that you ever want to put a shit song on a record, obviously – but also a couple of songs on there for reviewers to get their teeth into, that gives you the perfect mix, he said and I can see what he means.”

“And,” says Ginger, interjecting. “You have to remember that before Pledge Music there was a long period where people didn’t want to know about our records.” He has a point, after all even SG5 was only available on import from Japan. “So we [he points at Denzel] just got in the van and went out to play shows.

“When you boil it down, really, it’s all been a way to avoid getting a proper job.”

And that right there, is where things got weird.

Photos used both taken from Gingerwildheart.net