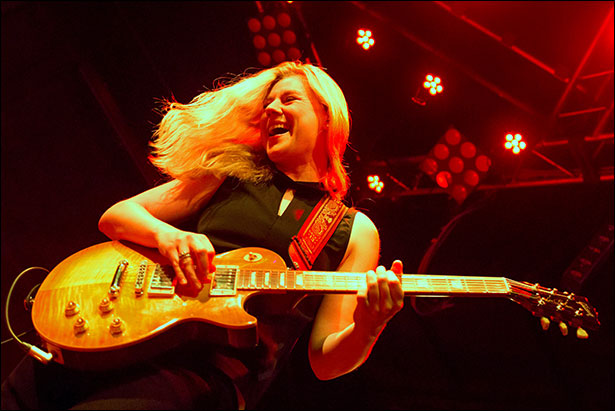 Touring, singing, and home towns with the queen of British blues


Damn you countless rock biographies. Or perhaps, damn the fact MVM isn’t 15 years older. Either way, when rock n roll stopped being glamorous who knows? Maybe it was all a myth anyway, but very definitely the days of being flown off in a jet around the world to interview rock stars have gone.

Now, instead, they do “Press Days,” which means that the poor star gets to sit on the phone answering the same inane questions. Joanne Shaw Taylor has been doing one. She started at 10.30 in the morning, and her last one is due to ring at 5-15pm for his fifteen minute slot.

MVM knows this because we are the last one. Which is why, for reasons far too dull to write down, we are on the phone with one of the very brightest talents in British Blues rock while sitting in a car parked by a row of shops in the village of Knowle, just outside Solihull in the West Midlands.

The town of Solihull is seven miles outside the nations second city, and is home to many things: Birmingham Airport for one, the NEC for another and various members of Black Sabbath and Slade have lived there over the years. It’s also where Joanne Shaw Taylor grew up. She now lives in America, but there’s still a Brummie lilt to her accent when she speaks from Yorkshire, where she’s working today. So, as she answers the phone and pleasantries are exchanged about her day (“it’s not been too bad, I’m holding up well” she laughs) she can spot a fellow Silhillian. “I recognise that accent,” she says.

MVM has been rumbled. Solihull has been home to this writer for four decades and it seems you can take the girl out of the town and all that. So there’s a chat now about what school we both went to – not the same one it turns out, she went to one called Alderbrook – but she did have guitar lessons at the one MVM attended. Explaining where this interview is taking place, Joanne shoots straight back. “I’ve had many good days – and nights – in Knowle. There’s a really good Chinese by that chippy.”

And that sums up, as far as MV can tell, Joanne Shaw Taylor. She might be one of the best blues artists on the planet, but you couldn’t wish to speak to a more down to earth and pleasant individual. Normal in the best kind of meaning of the word, she’s engaging to talk to and entertaining when she speaks. She’s back in the country for final touches to this year’s tour, and it’s one she’s looking forward to: “Yeah, it’s the biggest we’ve ever done in terms of the amount of shows,” she says. “We are hitting many places we haven’t done before, I can’t wait. I love it. I love playing.”

With this focus on performance Joanne admits she leaves the business side of things to her manager. “He’s also my promoter, so he’s in a great place to sort everything out. Pretty much I just turn up when and where they tell me, because I leave all the routing and promotion to those with the skills in that area, I only need to play guitar.”

If this betrays a lack of ego, then it doesn’t do so as much as this fact: Late last year, on the 2014 jaunt around the UK, MV was in the crowd when Joanne Shaw Taylor played an almost home town gig to a sold out Birmingham Town Hall. The beautiful old building was packed to its rafters and it was JST who’s name was on the poster. Then, a few short months later, we were back to see her support Robin Trower. There aren’t many artists who would support at a venue she sold out last year, but Taylor sees it differently. “There’s an element to the fact that I just want to go out and play with different people, but those Robin Trower shows were a fabulous chance to get in front of a new audience – some of Robin’s fans wouldn’t know me – and at the end of the day that’s what it’s about. Just getting in front of people. I don’t want to talk about it like its a business, because it’s not. It’s a passion for me, but at the same time, you want to get your music heard by as many people as possible.”

Now she’s back headlining, Joanne is in a position to help another band out in the same way. The outfit she’s got for the tour is Federal Charm, the Mancunian three piece are highly rated and hotly tipped (and their new record is a belter – look for MVM’s review next week ) and for Taylor it was a no-brainer to get them out on the road: “It was an easy decision to be honest,” she confirms. “They are a band we’ve worked with before. They are good guys and a good band, so it’ll be great.”

According to the lady herself the setlist for the tour isn’t finalised (“we are going to work on it all weekend and rehearse and see how we go”) but it will be different from the 2014 shows, this is out of choice and a desire to keep things fresh. “I like to do that,” she explains. “I think changing things around is good, because if people are going to pay their hard earned money to come see us, then the last thing I want to do is give a stale performance. We have something like 50 originals – which might not seem a lot but I only play about 13 because there’s a lot of guitar there too!”

It’s also a set that might change from time to time on the tour. “Yeah there might be times where I feel like playing something, or I’ll do it in a different key, or someone in the band might come in and say ‘I’ve listened to this song or that song, let’s do if’ and we will. It’s all good and just because I might park a song for this tour doesn’t mean we will never play it again.”

The singer has spoken before of the fact that she doesn’t write on the road, but she re-iterates it here: “I like to just focus on the shows,” she says. “I write pretty quickly anyway, so that’s not a problem.”

Due to record a new album next year, she’s charmingly self-deprecating about her time in the studio: “We are going to record really in 2016, which means on Boxing Day I’ll probably start panicking!”

Before that there’s the gigs. No hometown show on this run, she gets to Coventry and Bromsgrove which aren’t far away, but she’s more upset to be missing her favourite venue: “The Robin in Bliston. I love the place. I cut my teeth there, I learnt my craft there, and I can say that without upsetting anyone!” she laughs.

And as its press day, there a question that needs asking. She’s probably answered it a million times before, but tough. See, it’s her voice. A gorgeous, rich, smokey thing it isn’t, with the greatest respect, the usual vocal style for a girl from Solihull. “No it’s definitely not!” comes the very certain reply. “But it developed naturally around the time of the “White Sugar” record and it’s still developing. And trust me there’s enough footage of me where I’m just a girl from Alderbrook School singing the blues.”

Which brings us back to where we started. She might always be that West Midlands girl singing the blues, but the local girl done good. You’d best believe it.