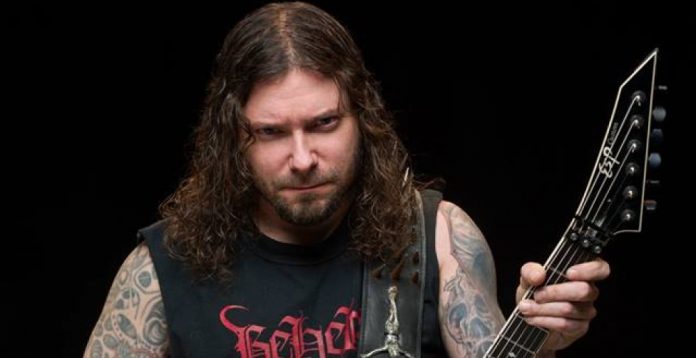 The Goatwhore founder shows us some good old “southern hospitality” backstage in Birmingham. Just don’t piss him off, don’t ask him to stop listening to metal – and for goodness’ sake don’t tell him you prefer Maiden to Priest.

The cramped dressing room at the back of the Alfie Birds venue is decorated in very odd fashion, brightly coloured murals line the walls of its tiny confines, “it’s kinda weird” laughs Goatwhore guitarist and founder member Sammy Duet as he surveys it. “But then there’s a lot of strange painting in this town from what I’ve seen!”

Sammy sits at the back of this small room tuning his guitar up. According to singer Ben Falgoust, who led us into this most inner of inner sanctums, he “disappeared in there to do some guitar stuff” a few minutes before, but when we meet him he doesn’t seem nervous or in the least pre-occupied. He sticks out a friendly hand to shake it with a smile.

All of which seems at odds with the musical persona of the man. If you took him on the basis of his work with Goatwhore, you might be expecting some kind of maelstrom to be surrounding him. Nothing, though, could be further from the truth. Actually, ask people who’ve met him to describe Sammy and the same words keep coming back “laid back.”

He breaks into another smile when MVM mentions this dichotomy: “Good, man! I should hope so too,” he answers in his Deep South deep voice. “It comes from being raised right! Everyone in the South, man, we are all polite, friendly people, it’s how we are.” Then he grins mischievously. “Just don’t piss us off, then you’ll see a different side…..”

Duet is here in the UK, for the second time in less than six months for a run of shows with Skeletonwitch and female death metallers Mortals to support their “Constricting Rage Of The Merciless”  album which emerged last year. Some have said that it marked a more mature side to the band, but before you can ask the guitarist for his thoughts, he’s offered them: “People talk about ‘maturing'” he snorts dismissively. “Apparently when you get to a certain age you have to stop listening to metal….I say, fuck that man! Listening to metal is what you do when you become weak!”

There is certainly nothing weak about Goatwhore, never has been and seemingly, if the guitarist’s words are taken at face value – and believe us, when he says it, there is steel in his eyes – never will be. What they most definitely are, though, is products of their environment. The Southern State of Louisiana has become synonymous with a heavy, oppressive sludgy sound. Ask Duet why there, why so many bands and why so many are so good and he offers a rather interesting opinion: “No one comes down there from outside to play,” he says, the fan in him clearly disappointed. “I mean Slayer only played down in Louisiana for the first time a year or two ago.”

This, presents a situation far different from the media perception of his home state, but it’s a situation he reckons that has created a real DIY feel to things: “We’ve had to do it our way. We are cut off from everything. It’s not like being in New York or Texas or California or wherever, where bands come though all the time, so if we wanted to go and watch a band you had to make your own scene,” he reasons.

And create their own scene is just what they did. The bands from that state read like a who’s who of metal. Down, of course, Crowbar, Eyehategod and Goatwhore, all magnificent and all with a thread running through them, but says Duet, what makes them special is the differences. He’s uniquely placed to make that assessment too, given his history. He’s played in Crowbar, a former Goatwhore Bass player Pat Bruders went off to Down at one point, and Duet says that the NOLA bands are inextricably linked: “All of us, yeah, you could say we are products of our environment, but there’s a lot of variety about the stuff down there.”

As his earlier comments – and indeed the sound of his band – might indicate, Duet is not the type of man to compromise. Ask him to talk about his favourite music and becomes animated tracing what you suspect might almost be the soundtrack of his life: “Well there was the UK bands, Priest, they are awesome, Sabbath, all those guys. Then death metal came along, and you’ve got Deicide, Cannibal Corpse, Morbid Angel and we all got into that, then there was the Scandinavian black metal thing, and those dudes were doing some really, really cool stuff. Even now, there’s some really great young bands coming up.”

A man who knows what he likes, he jokes that it’s difficult to find new music (“it’s all been done, it’s easy to put a favourite record on,” he laughs) but forces himself to make sure he doesn’t miss anything. He sits in a T-shirt for the band Midnight, and enthusiastically endorses them, but whilst he his absolutely clearly steeped in – and dedicated to – his music, Duet was pretty outspoken about occult bands last year, appearing to criticise the genre.

Proud of his faith, the guitarist tells us that he influenced by Satanism, “but not the kind Anton LaVey teaches.” MVM decides not to push the issue, believing religious belief is a personal matter, but this is important in the context of the comments he made last year. On the Goatwhore Facebook page he was quoted as saying: “that seems to be the trend “haunting” the scene as of late, do or die, don’t be a pussy, its never too late to live your life, negative vibes to the general public.” Given the opportunity to expand on his words here, he says that his ire wasn’t reserved for occult bands in general, but rather fake occult bands: “There’s so many bands with the look,” he explains patiently. “But they can’t all mean it, you know? I really just wanted to highlight the fake aspects of it all.”

He is quick to point out too, that despite the inference placed on those words in the media, the criticism was most definitely not of the band Ghost. “I really like those guys, I like what they are doing, I wish them well,” he states. Interestingly, he feels the same way about Steel Panther: “They are cool because they are a joke band, and good luck to them, they are laughing their asses off all the way to the bank!”

A thoughtful speaker, Duet has some interesting thoughts to share on the nature of music having established pretty unequivocally that he will only deal in reality, it is also the idea of sharing that music with people that appeals to him: “I make music because I want people to hear it. I want to share it. Some of these black metal bands, it’s almost like they don’t want you to come across their stuff – that’s ridiculous!”

Goatwhore can’t be accused of not wanting people to hear them, almost constantly on the road (“it’s a release for us”) and it’s a strategy that’s working. “The tour is going really well,” says Sammy. “We are definitely noticing more people at the shows. That’s just great, we want to infect as many people as we can!” he laughs.

As good a time as he’s having with Goatwhore, asking Duet the standard question of: “if you weren’t in Goatwhore which bands would you most like to be in?” Yields a very unexpected response. Intended as a light-hearted conclusion and expecting an answer of “Judas Priest”  given the tone of our earlier chat, MV is somewhat taken aback when he says, almost without hesitation: “Acid Bath.” That marks the first band he was part of, and he admits: “We all came from different backgrounds and different places, even to the point of almost fighting sometimes……but when we got in a room, we were magical.”

As he reminisces, we ask if that friction still forms a vital part of the creative process in his current band, and he grins at the thought: “Yeah, I think you need a bit of argument sometimes, it helps.”

Watching Goatwhore onstage a couple of hours after we chat, it’s clear that the four men have a bond. They also have a sound that is quite unlike anything else. As main support on this tour to Skeletonwitch, it’s fair to call their 45 minute set “crushing.”

During the dressing room chat, Duet had turned the tables on MVM: “Let me ask you,” he’d enquired. “Maiden or Priest?” Answering for the Irons seemed reasonable until Sammy spots MV in the crowd and informs the audience of our thoughts that Maiden were better than Rob Halford’s local lads with a incredulous shake of the head, and as the giant Falgoust does the same we begin to regret our answer. Indeed, for a minute MV starts to wonder if we have done the very thing he’d warned against at the start, but then, the pair break into grins and begin fire out another swampy, sludgy slab of metal, as horns go up all around.

Piss Sammy off? No chance. It’s as he’d said. It’s all about Southern hospitality.