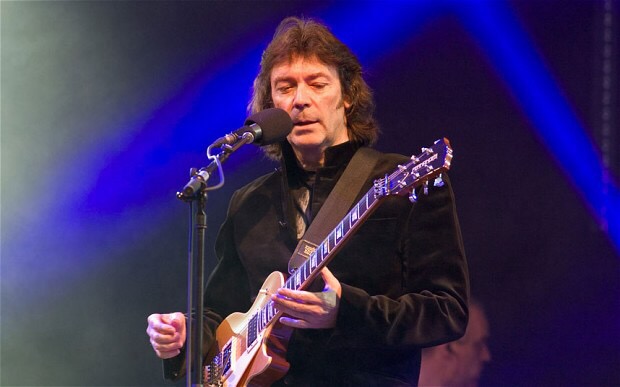 Prog Rock by its very nature, from the second it began, is challenging. It’s meant to take the listener to places that no other music does. So when Steve Hackett tells you that his new record “Wolflight” is designed to document: “A journey. Either a journey on your own for self-discovery, or a physical journey, I wanted it be like a travelogue,” you’d best believe that even by prog standards it’s complex. It’s not that, specifically, it’s a challenging or – by prog standards at any rate – a particularly lengthy tome, it’s more that the dazzling array of styles on the album, Hackett’s first for three years.

We’ll get to that in a little while, and the accompanying tour while we are at it, but there’s more pressing matters to begin with. Hackett is on the phone to MVM from his home in London on what is a glorious June morning. The guitarist is immediately jovial and chatty, but is concerned that he might not be at his best.

It’s 9am when the call is made, and let’s be honest, Keith Richards probably isn’t in bed yet, let alone conducting interviews, so you’d forgive a rock star for not being at his most chipper at that time of day, and who knows, Steve might in his younger days have had days like that himself? But it’s something a little more homely that’s upsetting him. Hay Fever. Yep, it seems that the irksome summer thing that upsets millions of us has get one of the best guitarists of his generation in its grip too: “It’s bad this morning,” he laughs, “so I’m ever so sorry if I sniff and sneeze at you while we talk.”

A few sniffles, though, can’t hide the fact that with “Wolflight” Hackett has made something genuinely special. You get the feeling he knows it too, certainly he’s eager to talk about it and it’s noticeable that he does so in warm, but very considered, tones. An engaging subject, he’s happy to discuss the record in far more more detail than the usual rock star. The obvious place to start is right at the beginning, how did all these ideas get formed? The answer to that, according to the man who made it, was a mission to challenge himself: “You are never too old to learn things,” he tells us. “Ever since the first outbreak of what we use to call ‘World Music’ happened in the late 1960s there’s been a plethora of things to discover and use, to have fun with, if you like. A lot of the guys that I made this record with are extremely proficient players, so it was almost my mission to join them, so I really began pushing myself to learn some new instruments, some new techniques, so that I could live with these fellas in the studio.”

That last sentence, perhaps unknowingly, perhaps deliberately – and the answer to that only Steve Hackett himself knows – seems to sum him up. He doesn’t need to bother getting out of bed in the morning to talk to MVM, and he doesn’t need to test his skills. For Christ’s sake he played on “Selling England By The Pound” so he needs to answer to no one, and yet here he is, and here the record is.

Admirable self-deprecation aside he’s warming to the theme and explaining how his own experiences have permeated through to the music. There is an Eastern influence on “Wolflight” that comes from travels to Egypt, for example, and as he says: “Travel is great to broaden horizons, to open your eyes and mind to new cultures, you can soak up so much, and that was definitely what I wanted to do with the record.”

Even the album’s striking artwork came about because of a willingness to explore. The cover of the new record sees Hackett right in the middle of a pack of Wolves, but whilst some might have insisted on photoshop trickery, or a body double, Steve threw himself straight in with both feet. “Yep, they are real!” He laughs as we ask him to confirm what we’d read to that effect. “It was a wonderful day, and an experience I’ll never forget, one of the most interesting things I’ve ever done in my life.”

Animal welfare laws in the UK – and you’d guess health and safety laws too – meant the shoot had to take place in Italy: “We went out and met the handler with the Cubs. They were incredible animals. Once they understood I wasn’t a threat, they were tremendously affectionate towards me, almost empathetic in their approach and as concerned for my welfare as I was for theirs. It really was unbelievable to do it.”

Hackett seems during the course of our chat to maintain the ability to be excited by the both the music business and the business of making music far more than many musicians of his – shall we say – experience. Even making videos, this time around, was approached with gusto. There have been three clips from “Wolflight” so far and he’s soon to fly to Greece to make a fourth. “It’s been great fun,” he says jauntily. “Previously, when I’d make videos for some of my early work it was tedious, I’d stand against a white wall and mime, dancing around. Not fulfilling at all, on this cycle, I’ve been really able to sit with the Director and make something interesting that I’m proud of.”

Although we sit here chatting in the height of summer it won’t be long until the Autumn rolls around. This might possibly be a depressing thought, but it does mean that Hackett and his band are back for a tour. If by now you’ve realised that he doesn’t like the grass to grow too long under his feet, then that most certainly extends to this run of shows. Billed as “From Acolyte To Wolflight” it marks a departure from the Genesis Revisited shows that have filled venues for the last couple of years. This was a deliberate plan, according to the man who’s name is on the ticket. “I wanted to take the audience through my career,” he states. “Voyage Of The Acolyte” came out 40 years ago and it seemed like the ideal time to have a look at things.”

Not that he’s ditching the Genesis stuff: “No, not at all,” he says. “The audience loves hearing those songs and those shows have been tremendously well received, so we’ll still have Nads Sylvian with us [Sylvian is the frontman who had played such an integral role in the Genesis shows] and we’ll do an hour of those in the middle, I think. It’s looking like it’ll be a three hour show.”

If that prospect wasn’t enough to get Prog fans counting down the days until the tour begins, then there’s also the recent addition to Hackett’s band. Bass player for these last jaunts has been Nick Beggs. The former Kajagoogoo man is busy with his duties with Steven Wilson, not that there’s any bad blood between Hackett and the new king of British Prog: “Steven is a great talent and a great friend,” offers Steve. “He’s actually remixing and remastering some things with me.” But nonetheless a bass player had to be found, and Roine Stolt ain’t a bad one to call on. Stolt is the leader of the phenomenal The Flower Kings, and hadn’t played Bass for a while, a fact that Hackett is acutely aware of: “I was amazed when he agreed to do it, he’s such an incredible musician and guitarist. It will be great fun to work with him.” At this point for almost the first time, he pauses, as if considering whether to finish his thought. When he does its to offer this tantalising news: “We are hoping to work it in to the set that he will play guitar too, as we’ve got some things we’d love to try together, twin lead stuff….”

Those shows mark the fourth time in some cases that he’s been back with his music in the matter of a couple of years. Such a fact lends itself to a couple of questions. Firstly, in these boom times for prog has he noticed the audiences getting younger? “Most definitely,” he shoots back. “I put it down to the desire to take a – that word again – journey, younger people, with the Internet and so on, they have been able to discover music that maybe they didn’t know, and it’s great that those songs connect. At the same time, though, we’ve got to keep it interesting for ourselves too.

Then the second question: at this stage in career does Steve have any say in where the tour goes? It’s noticeable that the venues are basically the same, so does he just turn up when and where he’s told? We should have known better….: “I’m very much in control of these things,” he says in a way that suggests he is in control of everything he does. “I’ll sit down with my manager and my wife Jo. We’ll have a look at the itinerary, see where it’s going, see if it looks interesting, and there are of course some venues that we really love to play, the sound maybe really good, the vibe, the people.”

It’s an interesting and perhaps grounding thought that a prog legend with his destiny in his own hands, the ability to charm everyone from journalists to Wolves and a talent and back catalogue that may would kill for, is still held to ransom by particles of pollen, however. Maybe that knowledge, that in some things whatever sets us apart we are equal, is the reason he is so humble? Maybe it’s something else. The sheer enjoyment that keeps it fresh, as he puts himself by way of a conclusion: “I still love doing this, that’s why I do it.”