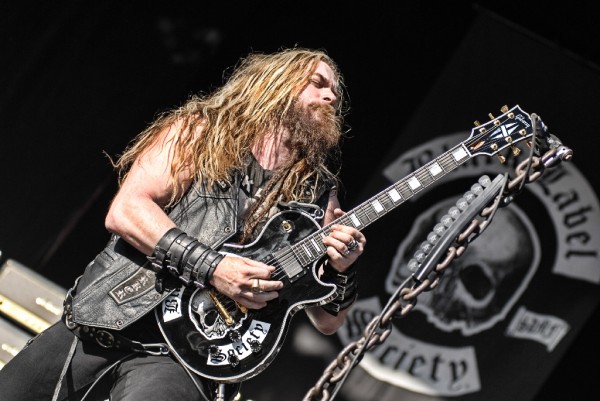 Ok. Just sometimes things occur that defy description. When the only possible thing to do is to forget what you’ve just heard and plough on with what you were going to do anyway. This might be one of those times.

“You know, it’s like when you are jacking off to Led Zep IV that never gets old. You can’t get tired of that shit, can you?”

The man who has just said those words is Zakk Wylde. A few days before our interview, he was all over the entertainment pages jamming with Paul Stanley, Lemmy and Glenn Hughes at Dave Grohl’s birthday party (“that was fun, it was good to see the guys again,” he says.) now he’s telling MVM how he gets on his own Stairway To Heaven.

That is Zakk in a nutshell. A warm, welcoming individual, but one who is fully fledged in rock’s major leagues, he chats as though he doesn’t have a care in the world, and doesn’t appear too interested in playing the salesman either.

For example ask what fans can expect from the tour dates and he replies: “oh shit man, it’s gonna be like a Broadway musical, more costume changes than Brittany Spears show, that’s our inspiration this time around.”

It is at this point we ask him if he still enjoys being on the road, and the mentally scarring image of Wylde alone in his room comes back.

He’s every right to be in a good mood, though. A killer new album “Catacombs Of The Black Vatican” is in the bag, and his band are already on tour. He’s doing the interview as BLS are preparing to go on in Kansas (or as he puts it, “we are hanging with Kansas Chapter this evening,” as if he still believes his band are the last great biker gang in town.) all is very good in the Wylde world it seems.

“Yeah man it’s going well, we are out with Hatebreed, and those guys always bring it, and we’ve got the Butcher Babies with us too, and they are great.”

Both those bands are old friends, he says, and handpicked for the jaunt. In the UK one of the opening acts is stoner rock’s new stars in waiting, Crobot, and we ask if he had any hand in this too, the answer tells you everything you need to know about Wylde’s outlook on life: “I haven’t picked them for the tour, no, but I know the music and it’s cool. I look forward to meeting with them, hanging out and becoming friends.”

This is probably why Wylde is so universally popular. Tales of his shenanigans with his partner in crime Dimebag Darrell have passed into folklore, the open door, open bar policy of the past has won him many friends around the world. His superb playing has won him many, many legions of fans.

On the rare occasions he is serious, it is absolutely crystal clear that this is a man who loves – and lives for – music. He still practices every day: “You are never to old to learn,” he explains. “I’m learning things all the time. I still get inspired. I still make sure I do my scales every day. I want to keep getting better. ” But for Zakk Wylde you suspect it runs deeper than that.

Happily married to his childhood sweetheart (I’ve got the best family in the world”) two of his four children are named after Ozzy (who is still referred to as “the boss” on numerous occasions during our chat) and Jimi Hendrix. He is absolutely immersed in music. But far from being some dinosaur, he can reel off some new bands far better than you would think a man who is clearly so steeped in classic rock might be able to do. A man who still buys records (“the new Led Zep box set is amazing!” He says with clearly genuine enthusiasm) the last album he purchased is still something of a surprise: “The new Beck one. That’s absolutely brilliant,” he says. MVM mentions that we’d lost touch with Beck around the time of “Sea Change” and he is offering purchase advice: “oh dude, if you like “Sea Change,” you’ve got to check this one out. It’s back to that. I love it.”

In fact there are times when it seems that Zakk would rather talk about any other music rather than his own, which is interesting for a man that is responsible for so much superb stuff over the years. He talks about Ozzy, Sabbath, Thin Lizzy, The Allman Brothers frequently. Getting him to speak about BLS, though, that’s a challenge.

Eventually he tells us how pleased he is with the band: “This is a great bunch of guys, we love hanging out. We love jamming and we are all playing at the top of our games. Everything is just about perfect in our world right now.” He is similarly pleased with the “……Vatican” record. “We never go in with any preconceptions for the albums,” he affirms. “Instead we just get in the studio, start jamming and see where it takes us. We’ve been doing this a long time, we are good at it, you know? And people still seem to dig what we are doing, so that’s really cool.”

He’s quite right, he has been doing it for a long time. And in that time – let’s be honest – there’s been a drop off in record sales, so does he subscribe to the whole “rock is dead” thing that certain people have been quick to peddle. Not a bit of it, although his typically bullish and upbeat assessment is tempered with some concerns: “Yeah of course you worry for the young kids coming up. How are they going to make a living the way things are?”

Not that he’s concerned that the supply of bands is going to dry up. “There will always be kids out there who want to check out their favourite bands influences,” he says not unreasonably. MVM mentions at this point that it was his own Pride And Glory band, the first thing he did without “the boss” that turned us on to Southern Rock, and he adds, happily: “Yeah man! That’s what I’m talking about! Bands like Avenged Sevenfold will talk about Maiden and Sabbath and kids will get on their iTunes or whatever, and they’ll be fans. Those bands will go on forever!”

Such longevity, we suggest doesn’t happen in pop music, where in these X Factor, Pop Idol times bands are here today gone the next, does that superficiality bother Zakk? The reply that comes back sums up what is so wonderful about talking to this man: “I honestly couldn’t give a shit,” he laughs. “And they don’t give a shit about us either. The way I look at it is quite simple; pop music to me, well it’s like a vegetarian restaurant. I don’t know what’s on the menu in a vegetarian restaurant. I don’t know what people do in a vegetarian restaurant and I don’t want to know. I eat steak. And I like steak. I ain’t changing. And you know what else? My veggie friends, they don’t care about steak. They are happy with whatever they eat. Sabbath, Zeppelin, bands like that, they are steak to me.”

The mere mention of Led Zeppelin brings is back to where we started. And that is a scary thought. But hey, even a 24 carat rock star has to get his rocks off somehow, right?