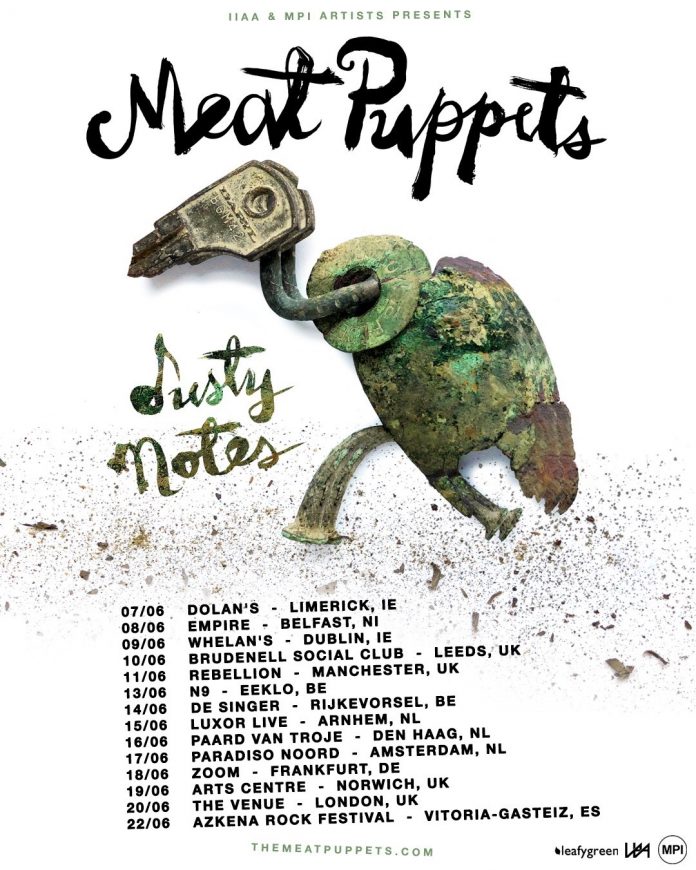 The Meat Puppets‘ story begins with three kids, enamored of music and immersed in the psychedelic drug culture of Arizona in the ’70s, who find their way to punk rock and painstakingly become one of the most important bands of the American underground.

As 2018 drew to a close, the world was greeted with the thrilling news that the original line-up of the band was returning for a new album, Dusty Notes,released this coming March 8th through Megaforce Records, and the band can now also confirm that they will return to Europe for a highly-anticipated series of shows in June later this year.

At their induction into the Arizona Music & Entertainment Hall of Fame in 2017, the original lineup of the Meat Puppets – brothers Cris and Curt Kirkwoodand drummer Derrick Bostrom – joined together onstage for the first time in over two decades.

Throughout a set that included era-defining songs like “Lake of Fire,” “Plateau” and “Backwater,” the chemistry was more than promising, as Bostrom isn’t shy to point out. “It was so intense that even I couldn’t deny it!  I remember why we did this. It was magical.”  “It was the psychedelic fuckin’ time machine,” adds Chris.  “Mind-blowing.”

That rekindling has resulted in Dusty Notes, the first Meat Puppets studio album to feature the original trio since 1995’s No Joke!.

Since the band debuted in the early ’80s, Curt Kirkwood has continually proven himself to be among the most brilliant songwriters of his generation. Time after time, album after album, he’s demonstrated an extraordinary ability to draw upon various roots and rock styles en route to a unique new vision of what the Meat Puppets can be. His latest contributions, especially songs such as “Warranty,” “On,” “Nine Pins,” “Outflow” could be forgotten gems from Nashville, Bakersfield and Laurel Canyon.

Dusty Notes also features keyboardist Ron Stabinsky, a jazz-trained virtuoso adept at any style, and Curt’s son Elmo, whose old-school rock-guitar grit ideally complements his father’s spacier explorations. Intuitive, inspired and overflowing with genuine musicianship, it’s the sort of band that can transform what Curt describes as “simple yet engaging” songs into maiden voyages each night on the road. “I can ignore my vocal and listen to the other four guys play,” Kirkwood laughs.  “They’re all so good.”

“The band has been a really, really deep font of creativity,” Derrick said. “Love it or hate it, hit or miss, Curt is just prodigious. They are still living the rock lifestyle; they’re not doing it by half measures. They stayed on the road. These guys are uncompromising. I consider the Meat Puppets to be a national treasure.”

“We’re really excited about our new album and we can’t wait to take the new songs on the road,” continues Derrick. “We’re really looking forward to getting over to Europe! Our new songs and new line-up are going to blow peoples’ minds. We always have a lot of fun when we come over to Europe, and with this line-up and these new songs, this trip will be the best yet!”

Catch the band live at the following dates: