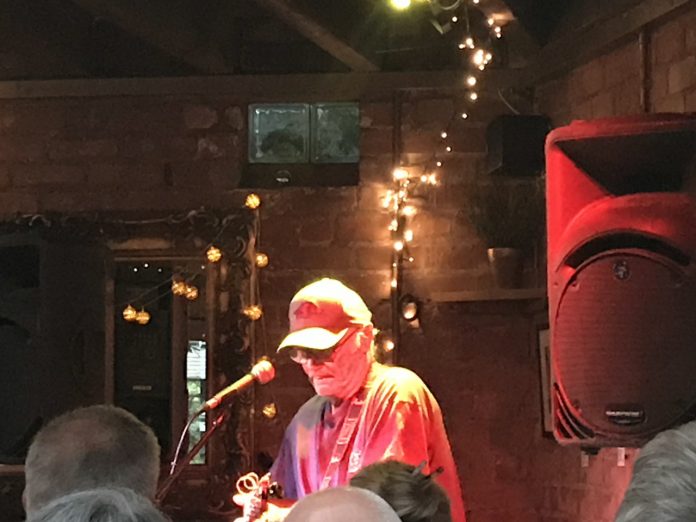 Half a century on the road distilled into one night

Michael Chapman, we learn during one of his stories tonight, doesn’t own a computer. Not only is it fantastic that anyone opts out of the modern world in such a way, but more pertinently it means that whatever MV says about him, he won’t be reading it.

Such a stance fits him perfectly. Irascible and self-deprecating in equal measure (“people ask me why haven’t you got kids Michael? I say it is because I haven’t been home long enough” he says at one point) the Yorkshireman has just celebrated 50 years on the road.

From the first tour (“I did three weeks in Southampton, there was a folk club behind every tree in the New Forest back then”) to now, his wonderful, dextrous playing and his weather-beaten vocals have melded to give a sound that – even though this word is horribly overused – is unique.

Tonight, mixing the music with some genuinely funny tales, Chapman is in fine form. “It Ain’t So” is bluesy jazz, written originally for Burt Jansch – “he didn’t want it” – and is a fine opener, the instrumental “Caddo Lake” is a superb example of his skill as a guitarist, while the brilliant “It’s That Time Of Night” – recorded by Lucinda Williams – is a real highlight.

There is a smattering too from his “50” album released earlier this year, “The Mallard” takes Chapman’s love for Steam Trains, and mixes it with a real sense of longing, while “The Prospector” is character built lyricism worthy of Dylan.

Arguably his best-known track “Postcards From Scarborough”, from arguably his best known album “Fully Qualified Survivor” sounds as fresh as you like here, and “Soulful Lady” from the same record, is transformed into something as fragile as can be. It also contains the line that seems to sum up Chapman best “never get around to sending letters, I never send no telegram,” he almost murmurs, “cos I don’t want nobody to know exactly where I am.”

That brings the first half to an end, the second though is more of the same. “Trains” is a mighty piece of playing, “Just Another Story” brings things right up to date, as does the wonderful “Sometimes You Just Drive” – both from the latest album. But in between there is the perfect reminder of this enduring talent with “Shuffleboat River Farewell” from 1971. However it takes on new life as only repeated playing for almost half a century can do.

No words are needed for the encore. A quite superb instrumental “La Madrugada” highlights one last time Chapman’s supreme ability on the guitar, before this unassuming man for whom music is the only important thing, is off with a cheery wave. No doubt to do it all again somewhere else. Such is the life for a 50-year troubadour. Such timeless and natural music has no need to bother with the trappings of 21st century life.