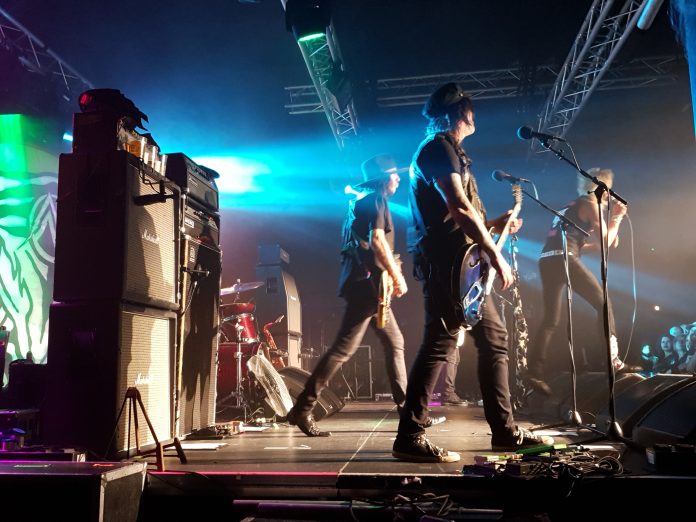 There’s no other way to put this. Nowhere else to put it in the review. So, I’ll just come right out and say it. Electric Eel Shock drummer Tomoharu ‘Gian’ Ito spends most of their half hour wearing only a sock. It covers, urrrmm…. “little Ito”, and he waves the sock about a bit. Sorted. Right. That’s out of the way and we should never speak of it again. For much of the rest of the set guitarist Aki Morimoto calls us Manchester. It is entirely possible that EES are not of sound mind. That said, you don’t get to do this for over 20 years if you don’t have something and whatever the likes of “Bastard” and the homage to 80s metal that is “So Much 80s” lack in guile, they make up for in energy and sheer endeavour. This is a riotous half hour of scuzzy, punky fun for those who think The Dwarves and Zeke are a little too nuanced. And, did I mention that the drummer was tackle out for most of it? 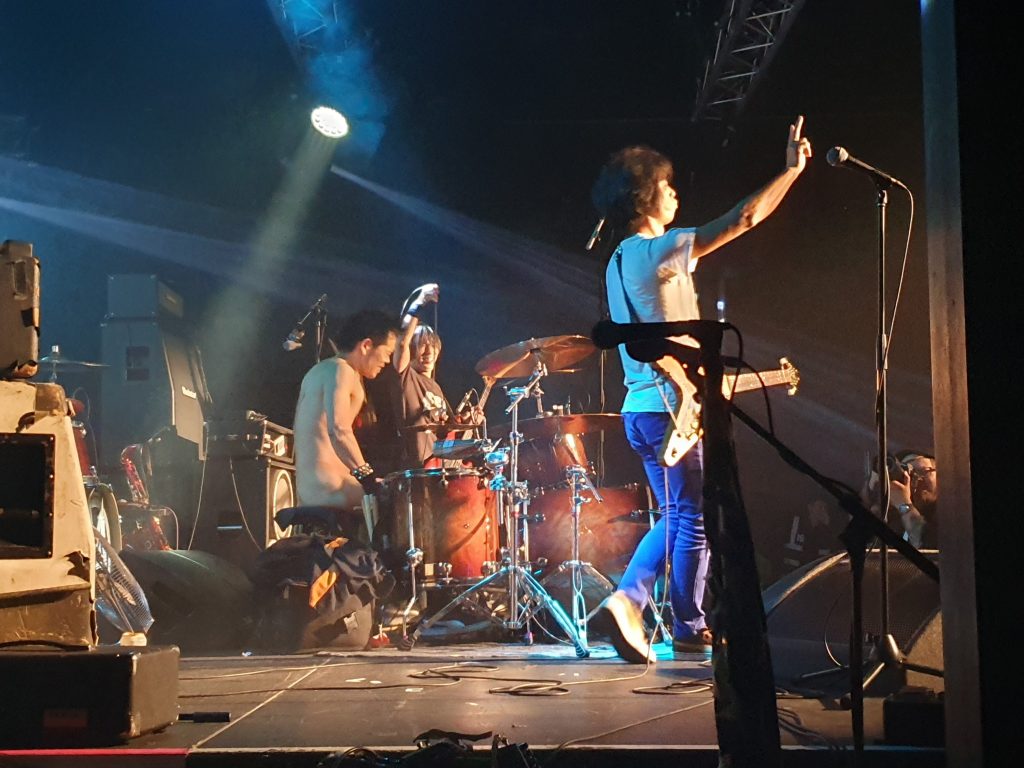 As Michael Monroe ends his set with the classic (the right word) “Dead, Jail, Or Rock N’ Roll” I look over at the crowd. My vantage point at The Mill is at the side of the stage, and to my right EES bass player Kazuto Maekawa is there on someone’s shoulders, arms aloft.

That’s what this song can do. Always will do, and 30 years or so ago, when I first heard it, did then too.

But that’s not all MM has, of course, forget the legacy for a minute, forget he was Hanoi Rocks singer, and focus on the now. “One Man Gang” is more than just his new record. It is him. It’s emblazoned on his jacket tonight. It’s in every pore of him.

And, if I may be personal for a sec, literally as the band come out and he starts with it tonight, my brother sends me a message to say my beloved football team has just gone 2-0 down. Tonight, is the first time I have missed one of their home matches for 20 years, so you best believe there is more than an irony of him getting to the hook line. “I am a one man gang and I’m living on the PMA”, about 30 seconds later. 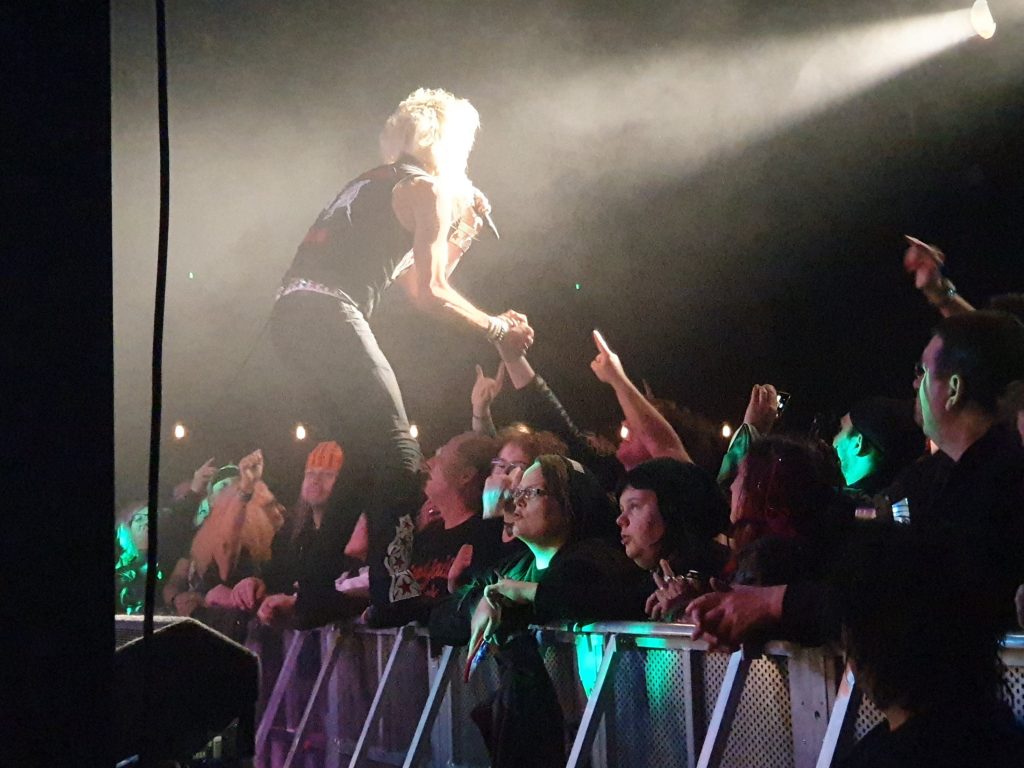 The reason for missing the match isn’t just that MM is a hero of mine, but it helped. And frankly, if you can’t feel uplifted while he and his crack band are on stage, then you don’t know rock n roll.

He is a dervish. Perpetual motion. Never stopping. The Duracell Bunny, any epithet you want to give him, but sweep all that aside and he has one of the finest back catalogues in the history of glammed up punk rock.

Rightfully, and clearly, proud of “…Gang”, all its choice cuts – and there are many – are played. My personal favourite “The Pitfalls Of Being An Outsider” is gloriously, unapologetically anthemic. It’s easy to spit “I don’t give a fuck if you don’t like me” in a room when you know everyone does, I guess, but you know he means it too. He is Michael Monroe and he is true to that.

“Last Train To Tokyo” is obscenely catchy, and that sparkly saxophone comes out for “In The Tall Grass” too, but really in the eight years since “Sensory Overdrive” – the return to form, if you like – there has been no missteps. So he can dip into any of them and come up with a belter. “The Ballad Of The Lower East Side” is snotty, “78” still sounds like a Wildhearts song (Ginger co-wrote it) but they are not the only pair that prove just what a spell this is for them.

It helps, of course, that Steve Conte is a fabulous guitar player, backed ably by Rich Jones, Sami Yaffa on bass knows Monroe inside out, and Karl Rockfist has the skills to match the best name ever. And when, towards the end of the set – by way of a few more new ones – they get to some Hanoi Rocks stuff, it really does well….rock, I suppose. “Don’t You Ever Leave Me”, mid-paced and New York Dolls-ish, “Malibu Beach Nightmare” with a total change of pace. This is where it started for Monroe, but his last ten years shows he’s so much more.

The encore’s pick is a wonderful “Nothin’s Alright”, from his Demolition 23 days. Overtly punk, the band featured Nasty Suicide, once in Hanoi, but now, if the internet is correct, a pharmacist in his native Finland. At the end of the encore, Monroe waves and literally skips off stage. He is 57 years old. Whatever drives him, Mr. Suicide should find a way to market it.

That PMA, you know. It’s good for you.