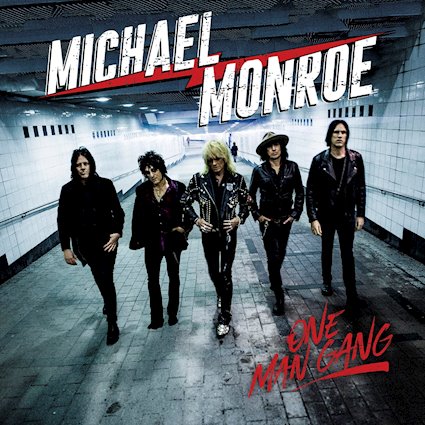 It always seems to me to be a load of politics, a load of dicks who are jealous of each other and a whole load of hassle.

I have always subscribed to the Groucho Marx thought that: “I refuse to join any club that would have me as a member.”

Halfway through “One Man Gang” there’s a track called “The Pitfalls Of Being An Outsider”. It’s chorus is an utterly glorious thing of beauty. If there’s a t shirt of this, I want the thing. It goes like this:

The concept of being an “outsider” had me thinking too. I went to a gig with a mate the other week. Reading the review the next day I got a text that started: “I don’t want to be critical, but…” so you kinda know its not going to be good.

What she said was interesting, though: “you wrote that like an outsider, observing”. The band we saw was her favourite, but its still a thing of curiosity, how many bands are you truly an “insider” with? I came up with about five definite answers – then this came. And the name Michael Monroe has to make the list too.

And that’s because it wasn’t Hanoi Rocks that led me to him, it was “Dead, Jail Or Rock N Roll”. We were 14. He was merely but one of our heroes.

The thing is, he still manages to make music that sounds like it should. But never as a parody and it never sounds dated.

This one starts with the title track. Respected enough with his peers to pull in Captain Sensible for a romp, not for nothing does he merrily suggest that “I am a one man gang and I’m running on the PMA”. Except he’s not. A “One Man Gang” that is. He’s got all his friends around, again. And since his de facto comeback record in 2011, “Sensory Overdrive”, he’s been able to count on Rich Jones and Steve Conte to help him out – they do again, and if you liked the last few then you’re going to love this one too.

There’s an effortless magic about stuff like “Last Train To Tokyo”, a sort of low-slung cool, and if you can’t sing the chorus after the second go around then you aren’t trying, frankly.

The rhythm section – like the two guitarists, they’ve been with him a while – of Sami Yaffa (he was Hanoi Rocks) and Karl Rockfist, are in mighty form throughout, but never better than “Junk Planet” which is built on a heroically dirty groove.

If MM has a “signature” sound as it were, then on this one there is a desire to widen that a little. “Midsummer Nights” has just a power ballad tinge, while “Wasted Years” is so drenched in harmonica that it sounds bluesy as hell, and “In The Tall Grass” does mid-paced in a way that you don’t always associate with him, and those three are in the middle of the record, then “Black Ties And Red Tape” is the sound of gears being switched. Two minutes of filth and fury, it is as punky as this gets.

“Hollywood Paranoia” has the air of a Ginger Wildheart (he’s former MM alumni too) solo track, as it rails against “Plastic Punks” over a hook that is so big you could hang your coat on it, frankly.

“Heaven Is A Free State” is a genuine surprise. Starting like a Mariachi band, it has a glam stomp, not too far from Mott The Hoople, it really is not what you’d expect at all. “Helsinki Shakedown” as an on the road song, but one of the ones that suggests that playing on the road is all that drives these five men. “We’re never gonna change the life we know,” he sings as if trying to remind himself of that, while “Low Life In High Places” is darker, gothic infused even, but still sounds like Michael Monroe, and that’s to it’s credit.

One of those musicians that always seem to elevate other peoples stuff, whether its on “Bad Obsession” for Guns N Roses way back when, or tooting his saxophone on the Black Star Riders “Tonight The Moonlight Let Me Down” just last month, his solo profile has always been just a touch under the radar. While “One Man Gang” – as fabulous as it is – is unlikely to change that, I’ll bet that Michael Monroe isn’t too fussed. There are more important things at play here. And some of us, well, just like being outsiders.