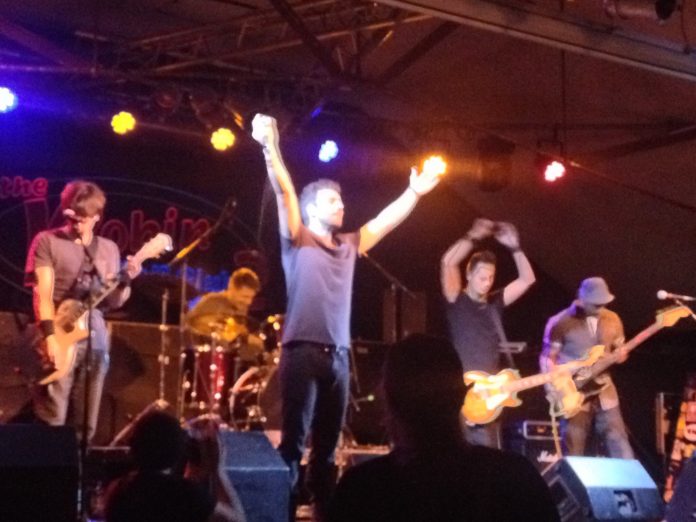 Midlands rock comes out to play for Midlands Rocks birthday.

“We’ve been together 25 years next year and we’re opening up….” smiles Voodoo Sioux frontman Nikki. Not that it bothers the four piece overly and neither should it. They know how to put on a show and they sure know how to pack a glam rock punch. They don’t even play “Jesus Christ,” their signature tune, tonight, preferring instead to try out a new one, but the excellence of “Damage” makes up for that. Here’s to the next 25 years….

Corvus are playing their first gig. Their polished brand of AOR probably gives away the point that this ain’t a bunch of kids. Instead, Corvus are made up of experienced session musicians and with their debut “Chasing Miracles” out last month they are ready to go. Tracks like the mid-paced “How Long” build to a kind of FM-like place and this is hook driven and extremely well thought out  stuff, perhaps at its best on the surprisingly hard edged “When You Love Someone,” although the impressive “whoa whoa” chorus of the title track would have got them on radio stations across the land 30 years back.

From a band full of sheen and catchy tunes at the start of the career to one with a touch more experience. Daylight Robbery are essentially the Kings of Midlands Melodic Rock and mean business right from the off here. “Scream Out Loud” soars for the sky, while another song from their most recent “Fall To Earth” record, “Samarah Never Sleeps” perhaps outdoes it for anthemic intentions. Stadium rockers in feel and execution, Daylight Robbery simply sweep everything else aside in their pursuit of all things huge. At their best – for example “Paradise Is Lost” which brings all their ideas together superbly – Daylight Robbery are very good indeed.

If the previous two bands have soared. Then The Black Hounds swagger. Older material like “Clarity” could probably give anything a bloody nose, and is a big old grooving thing, the band are tight and there’s plenty of meaty rock n roll here to get stuck into. A band that seems to be on a real upward curve and getting more confident. The slamming “Hit And Run” disappears off looking for trouble and most probably finds it, with “Call To Arms” appearing ready for a scrap too – as well as getting added bonus points for its dual guitar work. Closing number “Mr. Mayhem” merely gets bonus points for being ace. The Black Hounds then: Rather good, the dirty dogs.

Soley Mourning, regrouping and reinvigorated, have just released a brilliant record in the shape of “Rocket Pool” and the five piece pull this headlining slot off with all the skill and poise of a band who can do this with its eyes shut. Kicking off tonight not with a new one, but with “Remove Replace Rewire” they are basically a lesson in hard rock class. “Way Down Low” is a combination of thump and slither. “If Defeat Was Ever Glorious” is a brooding, slow burning ballad, balancing the set nicely with heavier material like “Bridges Gonna Burn.” An experienced, well-drilled act with European tours behind them Soley Mourning are far too good not to make a serious breakthrough. A strikingly funky cut from “….Pool,” “Accidental Enemies” is destined to become a favourite, and as they end tonight with a defiant “Fingers Up” there is a real feeling that Soley Mourning could be set for a real assault.

Tonight proved something that doesn’t need proving, it barely even needs saying, but sometimes it’s good to elucidate the bleeding obvious: The Midlands Rocks.