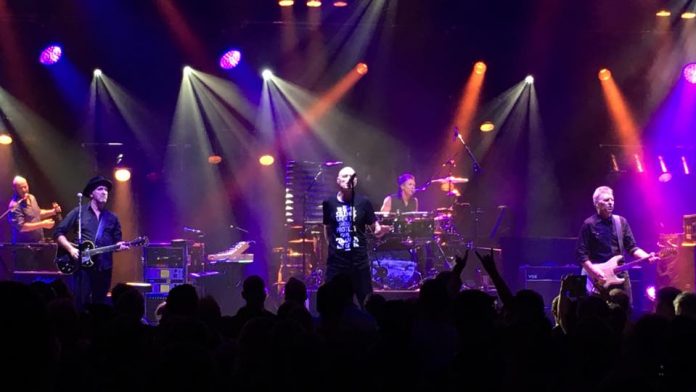 There aren’t many bands or artists left on my ‘Bucket List’ these days after being a gig attendee for just shy of 37 years…..but Aussie powerhouse band Midnight Oil are one band  I hadn’t been able to tick off for one reason of another.

Midnight Oil announced a World Tour a few months ago with just the one UK date on July 4th which sold out instantly, so another was added on July 23rd…..there was no way I was missing this event.

The band started the Two Hour set with the slow burner ‘Outside World’ which built the tension perfectly as the band then launched into the big hit ‘Beds Are Burning’ that had everyone in the packed room belting out the words….this was going to be some night!!!

The band had tinkered with the setlist every night on this tour, so for the hardcore fan who attended multiple shows you were never going to see the same show twice, the guy next to me from Germany was on his third show and loved every second of this performance.

The band really dug into their back catalogue with tracks like ‘Put Down That Weapon’, ‘Dreamworld’ ( A Particular Favourite Of Mine), ‘My Country’, ‘Now Or Never Land’ & ‘Sell My Soul’……but even for the curious casual fan there were the more commercially known tracks like ‘The Dead Heart’ & ‘Blue Sky Mine’….there really was something for everyone.

The energy onstage from the band is just captivating and it flows out into the crowd which just made for an electric atmosphere, frontman Peter Garrett is an amazing character who you struggle to take your eyes off….but to be honest the band as a whole patrol the stage with a confidence that says ‘we are going to knock your socks off’….and that they did.

The band returned for an amazing encore of ‘Truganini’ & ‘Best Of Both Worlds’…..and then sadly that was it…..will we ever see the band again here in the UK? I sincerely hope so…..that was a spectacular performance and after waiting so long to see them it was just what I wanted…..and a whole lot more.