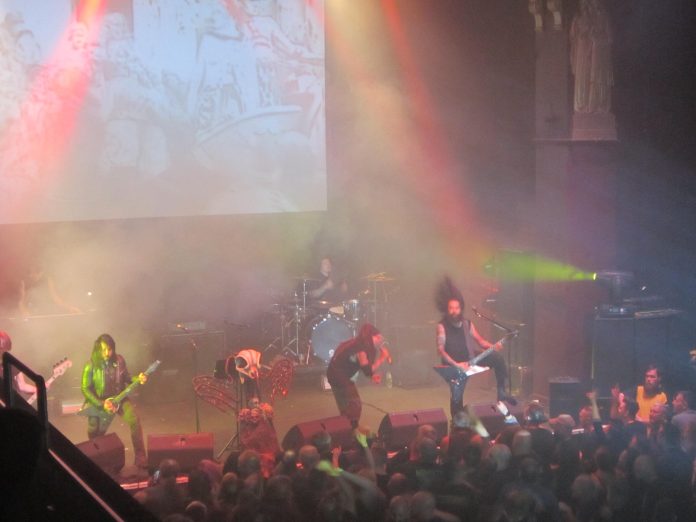 Industrial metal at its best always had a pop fixation. Vex Red, did “Genie In A Bottle”, Marilyn Manson wanted to be a diva, it always seemed to me. DeadFilmStar tick that box nicely, with a sort of take on Suede’s “Film Star” which they make their own. The Midlander’s usual schtick sounds like it belongs in an underground sex club, and that’s just fine. Taut, tight rhythms, mix with an electro pulse and a ear for a massive hook, exemplified on one that sees their singer yell a mixture of “dead rock n roll star” and “god was never on our side” marks them out as a little better than the usual outfit that released an album in 2008 And re-emerged. “Hello Cruel World” is almost euphoric, and well it might be too. After all this is a dream. “When we started this band all we wanted to do was support Ministry. Never give up on your dreams,” says the frontman Gary. He might have added, especially when they sound so gloriously nightmarish. 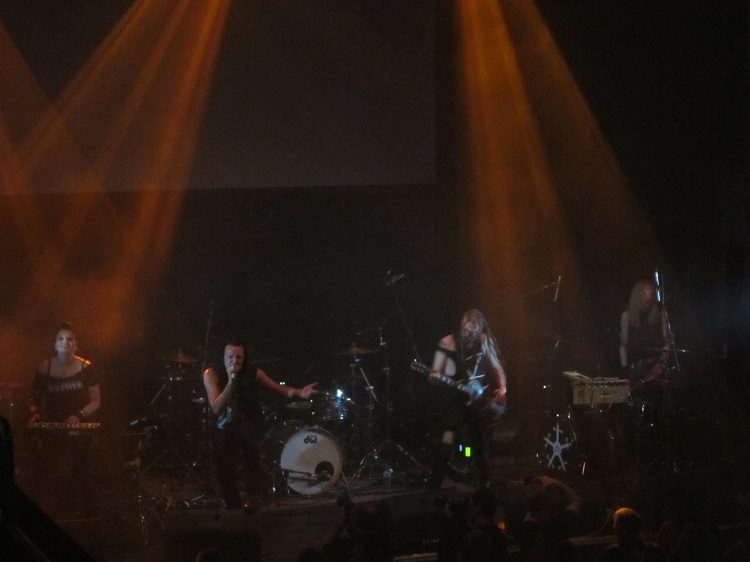 3Teeth inhabit a similarly dark world. The dry ice swishing around them gives them an ethereal, gothic look, and the music seems to pierce through the gloom. The LA 5 piece have just released the brilliant “Metawar” and “EXXXIT” from that one fair old slams. There’s something menacing about “American Landfill” too. And you wouldn’t want to meet it down a dark alley at any point. “Slavegod” seethes, “Atrophy” more crushes, but bathed in red light, this is a more immersive experience than many. The absolute peak of this masterclass in nihilism, however, is “Pit Of Hate” which manages to sound even more furious than you think it might. Their closing number “Master Of Decay” is a more precise attack, but throughout the set, 3Teeth bite fast, sharp and hard. 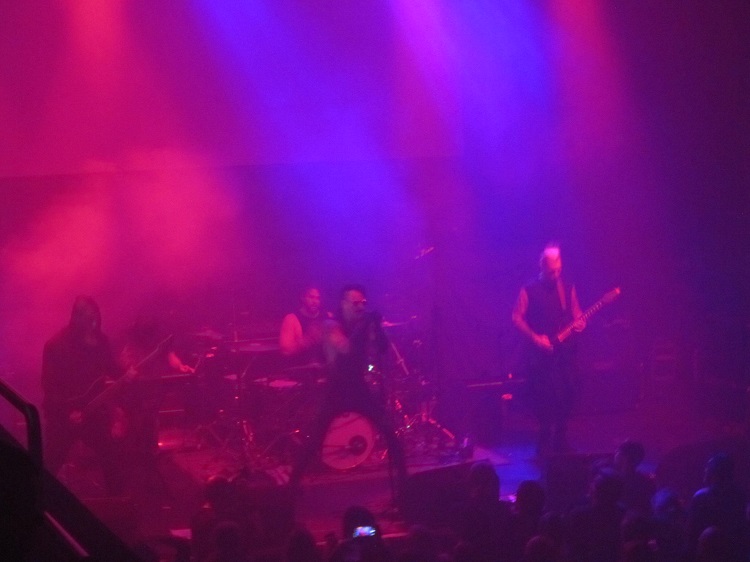 Two observations before we get started here. I’ve never seen Ministry before so forgive me for both, as they may be obvious.

First, this is a full on, sensory, audio visual experience. A stadium gig in a club venue if you will. Lights, video, you are bombarded. Bludgeoned into submission. Second, the band – as they launch into “Twilight Zone” by way of “I Know Words” – are clearly in rare form.

To that I guess you need to add. Ministry are fabulous.

Standing in the middle of all this chaos is “Uncle” Al , Al Jourgensen the evil ringmaster who sort of conducts as “Victims Of A Clown” reduces, essentially, the Institute to rubble. Amazingly, “We’re Tired Of It” takes things up a notch even from there. The drumming of Derek propels it. I’m not sure how you define punk rock exactly, but this seems it to me. “Wargasm” is as violently malevolent as you’d hope, and whatever nuances it has – and there are many – then a desire to be heard overrides them all.  “Antifa” takes the alt-right to task. Actually, it doesn’t. It destroys them and proudly waves it’s black flag.

There’s a line in that song – they keep flashing it up on the screen. “We are not snowflakes” and you can say that again. “Game Over” is the apocalypse’s fave song. “The nightmare is almost over,” screams Al (Al strikes me as a man who screams everything) “but it’s just starting for you Brits. Boris Johnson, Nigel Farage. Go fuck yourselves…..” and with that, he’s into “AmeriKKKa” and bringing the first half to a close.

The more eagle eyed may have noted that all those songs are new. The second half is – if you’ll forgive the connotation- greatest hits. Or as Al puts it. “We’ll celebrate the Fourth of July our way. By playing a bunch of songs from when days were crappy but not shitty……”

So “The Missing” is roared. “The Deity” induces a moshpit – and well it might. “Stigmata” gets closer to rock n roll, while “Jesus Built My Hotrod” is as ace now as when Beavis And Butthead thought it “ruled” – it does.

“Just One Fix” has a guitar line that is absolutely sleazy, “NWO” casts Al as a kind of fire and brimstone preacher, “Thieves” is a real fist in the air moment and keeps the crowd surfers happy.

Things finish on an eerie note. Revolting Cocks, “No Devotion” is almost hypnotic, as it repeats the voice of god means nothing a anymore, this voice matters ever more

Al himself condemned July 4th as a “fascist” celebration more than once tonight. I saw Skynyrd the other night and can you imagine the jingoistic, confederate flag waving shit they’d have pulled in this situation?

Not here. This was proudly independent, of course, but in a way that only Al Jourgensen could make it – and it was brutality done brilliantly.