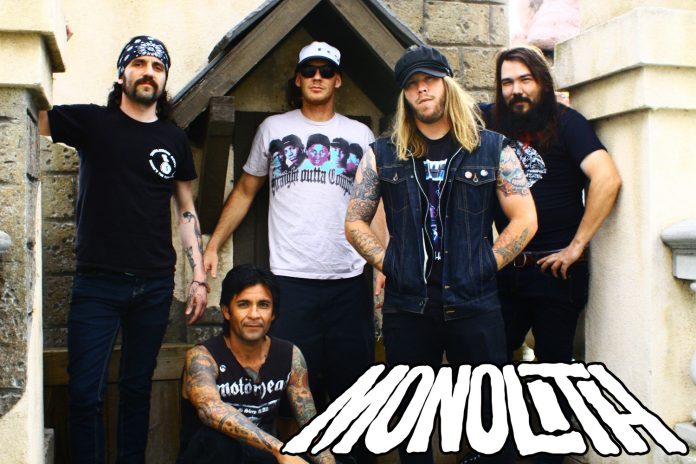 n 2013 Doug Walker (The Hookers, Nixon) started writing material for a new project. The idea was to be a metal project with heavy reference to the mid 70’s early 80s era of metal. He started corresponding with Aaron Howell (MF Ruckus, White Fudge) and they began work on recording the material in the summer.

Monolith`s mission is to play what they like to call “Pure Metal”, overdriven guitars, soaring vocals, facemelting solos, and lower production value than most current metal acts in order to keep the feel of the early days of metal. Monolith have played with: Pentagram, Jucifer, The Dwarves, Reverend Horton Heat, Sepultura, Clutch, Zeke, Anti-Seen, Avail, Electric Wizard, Torche, High on Fire, and many many more.

Monolith reckon they’ve nailed it. “Its not often that a wide array of musical styles can come together so well,” they tell us.

Their new record “Against The Wall Of Forever” is proof positive in their minds. They say it is “catchy, thrashy, punky southern fried Heavy Metal goodness. Angry , assaultive heavy rock, bursting with effective and pointed songwriting. It has serious Heavy Metal groove plus some anger and aggression thrown in for fun.”

Monolith homages the music they refer to as “Pure Metal”. Over-driven guitars, soaring vocals, and face-melting solos all tied in to keep the feel of the early days of Metal.

Featuring album art by Matthew Haas, “Against the Wall of Forever” was recorder at L.I.E Studios in San Marcos, CA and produced by Wiley Miranda.

It also features 8 new high-flying tracks that will make you feel as if you’ve time traveled to when British Heavy Metal ruled supreme.

The album is out on Feb 10th via Funeral Noise Records and we hope to review it around then.

For more Info check out: https://www.facebook.com/MonolithSD