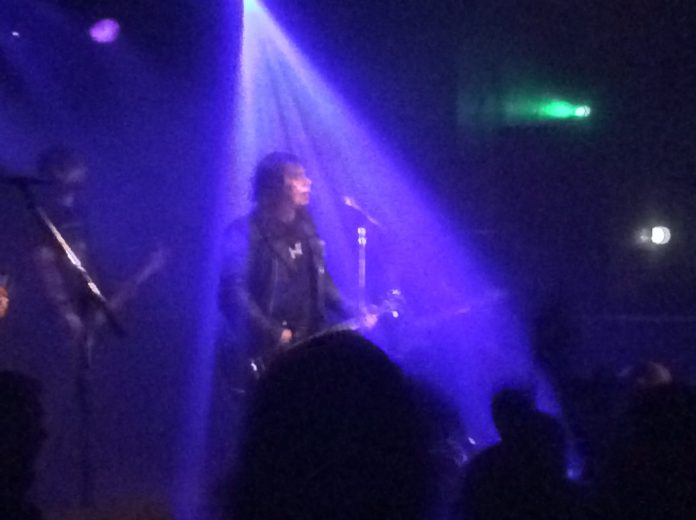 Dave Wyndorf takes the East Midlands for a spin

When Dave Wyndorf begins a gig thus: “Hey kids, wanna take a ride?” it’s probably best to assume that the journey is gonna be weird and a little bit trippy. Over the course of 20 odd years things have always been that way in Monster Magnet, after all.

Still, even allowing for the unexpected, we still weren’t prepared for the boogie slam of “The Right Stuff” and it’s swirling psychedelics to sound quite so good. Transformed here into a stomper and topped off with a fine solo from Ed Mundell it is tumultuous.

Thing is, Monster Magnet, well they are only just getting started. When they lock into a groove – as on “Dopes To Infinity” it is as joyous a thing as it’s always been. And the evil twists and turns of “Look To Your Orb For The Warning” – and you dread to think what Dave means when he says “you’re going down now…..” with such menace – give the early gig some light and shade.

The presence of “Twin Earth” means that the early part of their career continues to be mined, interesting considering that the last tour was almost solely “Last Patrol” material. The band are clearly still proud of that record though and plenty of it is played this evening. It’s glorious, slow burning lead track “I Live Behind The Clouds,” and it’s swaggering title track particular highlights.

This gives way to a song that most definitely a hippy freak out. “Spine Of God,” is a journey on its own, and includes a segue into “American Pie” because, well just because.

The diversity in this band is best exemplified by “Stay Tuned,” which includes the main set. “I’m ending with a 21st century lullaby cos that’s what I want to fucking do,” declares the front man, before what starts as a simple little acoustic ditty takes on the record industry and takes it apart. This is a world where “every piece of shit is the next big thing,” and where the protagonist wonders “how far we’ve come since the death of cool.” It’s a fine song, if a little odd as a closer. But this is Monster Magnet we are dealing with.

With the words “Are you alright? It’s not too slow for you? Well this is the future, slow and psychedelic…..” They are back for the encore takes in another of “….Patrol’s” lilting moments, “Three Kingfishers” – a Donovan cover if you please – before “Tractor” (and if anyone could drive a tractor on the drug farm it would, you suspect, be Dave) and “Space Lord,” errrmmm motherfucker, both from the tour-de-force “Powertrip” record, end a gig which proves a couple of things.

First, it shows that once a year these days Monster Magnet hit these shores, and once a year they do exactly what they want to, and it most certainly isn’t a Greatest Hits type set they had in mind. But it also is proof positive that whatever MM do, there’s no that can touch them at it.

As a kid, you might have been told not to accept lifts from strangers, but when Dave Wyndorf asks if you want to go ride for 80 minutes, just say yes.