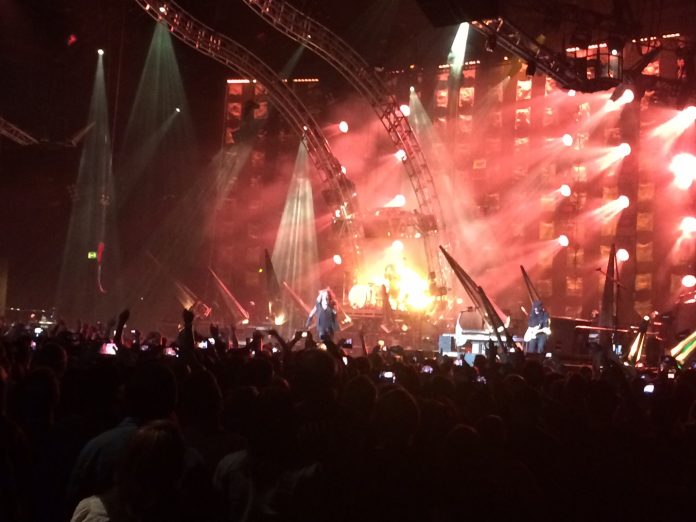 All bad things come to an end

The slogan for the tour is All Bad Things Must End. Forget bad, you’ve got to be pretty damn good if you have Alice Cooper as a support band.

The word “legend” is bandied about so much these days it means nothing, but Alice Cooper really is one. For forty odd years he’s been doing this, and whilst he might not be shocking the world anymore and in real life is a Christian man who plays golf with Presidents, for an hour tonight he’s acting how he’s supposed to. The basic premise of this is entirely ludicrous, Alice acts badly, gets killed, comes back and ends with a rendition of “Schools Out” with balloons, bubbles and glitter, but it’s so well done and the songs are so magnificent that he remains one of the finest live performers there is.

What amounts to a knee-trembler of a greatest hits set, and includes “No More Mr Nice Guy”, “I’m Eighteen” and “Billion Dollar Babies” before those who weren’t here for the truly execrable first band have even taken their coats off, then merrily takes in “Poison” and the relatively modern classic “Dirty Diamonds” while its still considering being evil. Then Alice dies, chases a scary arsed nurse about and comes back as a 10 foot high Frankenstein for – guess what – “Feed My Frankenstein”. The acting is so bad it could be WWE, but Alice Cooper and his fine band of reprobates are still the kings of shock rock. And the aforementioned “…..Out” is just a rock n roll party.

Yep, you’ve got to be good to pick Alice Cooper as your support.

Not that Motley Crue are daunted. Not once in 34 years of existence do you suspect Motley Crue have been daunted by anything, so an arena show in Birmingham ain’t about to faze ’em is it?

And actually for 45 minutes tonight Motley were the bad boys of hedonism they always were when MVM used to wear the Doctor Feelgood patch on its denim jacket at school, when the Sunset Strip really was the epicentre of the musical world and when the party never was going to end.

It’s ending now, and they’ve signed a contract to prove it, these four men won’t perform together again after December 31st in Las Vegas, and this consequently is their last ever show in Birmingham.

It’s one which starts like an explosion – literally in the case of the never ending fireworks and flamethrowers – and to start with gets more brash from there. “Girls Girls Girls” is sleazy and marvellous. The dancers-cum-backing singers are sassy and sexy and the band themselves begin in excellent form. The classics just keep coming, “Primal Scream” is still a brilliant song, “Same Ol’ Situation (SOS)” only needs a pole dancer to complete the picture, “Smokin’ In The Boys Room” is a wilfully daft boogie and “Shout At The Devil” is a fists in the air belter still after 30 odd years.

This is going to be a classic night, right, and gig of the year?

Well no, because the problem is something happens halfway through, and for about half an hour the whole thing essentially grinds to a halt and becomes style with very little substance. There’s some songs you don’t need, “M.F Of The Year” is just no good, and the version of “Anarchy In The UK” adds nothing, then there’s the solos. Nikki Sixx’s spoken word ramble is bad enough, but Mick Marrs’ guitar turn is worse, then there’s Tommy Lee’s drum solo. This looks great and for some would have been a highlight – the drum kit moves on a big roller coaster type thing and spins around and so forth – but if he’s playing anything at all its drowned out by the dance beat that is blasting around the arena – and even if a bloke is upside down above you playing drums, it’s still a waste of ten minutes to have him sampling Rage Against The Machine and The Beastie Boys while asking for a “Hell Yeah”.

Frankly for a while after the show struggles. “Saints Of Los Angeles” (if we are honest, the only truly great song they’ve written in a well over a decade) and the older “Live Wire” don’t hit home as they should. It takes “Dr. Feelgood” to get us back on track, and “Kickstart My Heart” is little short of phenomenal, ending with singer Vince Neil – who couldn’t sing live in his heyday and certainly can’t now – and Nikki Sixx swooping around in cranes to hover above the crowd as flashbombs and streamers shoot all over the place.

That would have been a fitting ending. That was what you wanted to remember the planets most debauched band by. Not the wistful ballad “Home Sweet Home” which is what they actually end with, on a small stage in the middle of the arena.

While this is happening the big screens are showing video footage of Crue when they were the most dangerous band in the world, that they can’t match that any more, is why they probably are right to end it now.

Not a bad gig by any means, but it promised so much more, and it so very nearly could have been so much better.