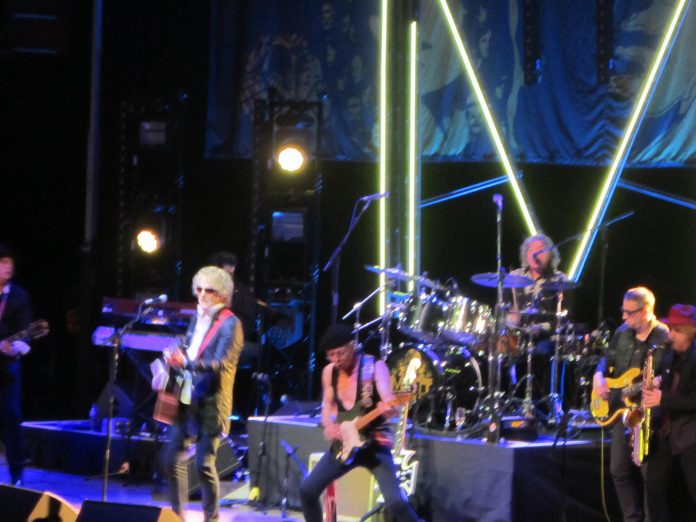 Sometimes you know, its all in the sneer.

Ian Hunter is 80 in July, but age is no barrier, it seems to suffering fools.

Mott The Hoople starting with “American Pie” is something they’ve done before, but only so when it gets to the line: “the day the music died…. Hunter can go, “or did it?” in a way that suggests he’d personally fight anyone that thought it had.

Rewind an hour or so, and he’d given notice that his finger was on the pulse still, too.

Tax The Heat are, apparently on this tour at his personal behest. And you’d best believe it’s a good choice.

At the end of their set a woman sat next to me and who I’d never met before turns to me and says: “they were very good, weren’t they? Can’t believe I’d never heard of them before.” Look, I resisted the urge to scream “no, I can’t believe you hadn’t either!” and instead agreed.

I am a regular TTH watcher. And the last few times I’ve seen them have usually been accompanied with the phrase: “….and I’ve never seen them play better.” Tonight is no different. Everything seems to be clicking into place for them. There’s a confidence, both in themselves and their material that is close to elevating them to the next level. “All That Medicine” might have already done that, given a fair wind, “Highway Home” and “Devils Daughter” from their debut prove this was no fluke either, but its work like “The Symphony Has Begun” that really suggests a depth and that this is a band that is nowhere near its potential. Ending cleverly, with a mix of old and new, with “Change Your Position” and “Fed To The Lions” means that I haven’t altered my opinion  on Tax The Heat since I first saw them, at the London Calling that Aerosmith headlined, they were on the second stage, and ever since that day I have bored anyone that wanted to listen – and plenty who didn’t – about them. So, lets win the “I can’t believe….” Type over, one by one shall we, boys? 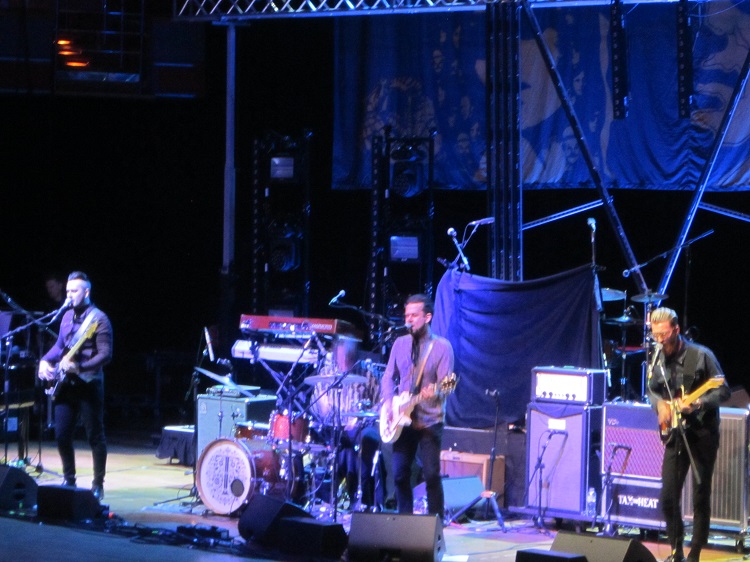 As a kid, I bought a Great White record. On it, it had a song called “Once Bitten, Twice Shy”. Then I got a Thunder single a few years later. It had a song on called “All The Way From Memphis”. Loving both, I investigated who this “I Hunter” was who wrote them. Went to the library, found out. And went to the record shop (we still had them then) and bought Mott The Hoople Greatest Hits that very day.

I don’t know how many have a similar journey, what I do know is as they play “….Memphis” tonight, there’s a lot of people dancing around, who like me, weren’t alive when “Live” came out in ’74.

That, though, is how music transcends generations, and it was ever thus.

Three of that 74 line up here, Hunter, guitarist Ariel Bender and keyboard player Morgan Fisher, and they are backed by Hunter’s usual touring buddies, The Rant Band, and tonight, they are special, they really are.

Because, right after the aforementioned words: “or did it….?” Are spat out, comes “The Golden age Of Rock N Roll” and there’s every reason to think we’re still in it.

A superb set of over 90 minutes is peppered with some genuine classics. “Honaloochie Boogie” (“we had to write a follow up single, after nine months, me and Mick came up with this…..”) a glorious “If I Was Your Mother”, a brilliant “Sweet Jane” for example, is not too shabby in any company.

Things move into an even higher gear, though. “Walking Around The Mountain” is a chance for Ariel Bender to take centre stage – and he’s never turned that down. The dynamic between the two main men, if you like, is perfect too, with the extrovert Bender a wonderful foil for the more laconic Hunter.

“Roll Away The Stone” (“this one outsold ‘the other one’ three to one” offers the frontman) gives way to a medley that includes “Jerkin’ Crocus” and “Crash Street Kidds” before “Cleveland Rocks”, so it has to be cool, right? Well, yes.

Then there’s the encore.

And you, me, and next doors dog knows what was in it. “…Memphis”, “Saturday Gigs” – and trust me, Birmingham remembered them  – before a simple: “and one more thing before we go” ushers in “the other” one, and believe me, if you don’t wanna stay alive when you’re 25, you sure as hell do now.

They ain’t young dudes, not anymore. But what Mott The Hoople are, though, is probably the most underrated of all the British Rock greats. This wonderful celebration showed that legacy perfectly