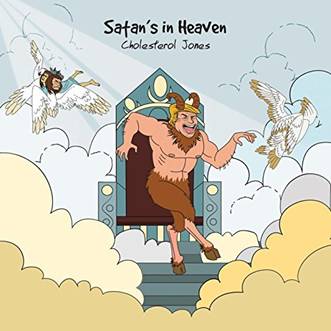 Cholesterol Jones’ latest video, “Satan’s in Heaven”, depicting the leader of the free world as the devil himself, swanking around in heaven, is entirely in keeping with his no compromise stance as a singer-songwriter and film-maker.

Cholesterol Jones is a folk singer in the truest sense: story-telling with a musical backing, using paradoxes, strange juxtapositions and satire to tweak the ears of his listeners and raise the hackles on his targets’ necks.

Satan’s In Heaven from Cholesterol Jones on Vimeo.

Taken from the EP of the same name, “Satan’s in Heaven” is jaunty gospel/country singalong that burrows into your brain like a barbed-wire earworm almost instantly. The accompanying video is an artistic triumph, the perfect mixture of dayglo laughs and acerbic criticism. Elsewhere on the EP, more universal themes are covered: the more country-tinged “He Claimed the Tree of Life” with its line, “Are you a canvas or a brush?” and the organ-led “The River Styx” both being not only beautifully crafted but oddly heart-tugging meditations on life.

Cholesterol was born on a US army base in Bavaria before moving to Boston, where he spent his formative years. After a period of twenty years living in New York City, he now splits his time between London, Boston and Cape Cod, his observations of the world around him keener than ever. Though his opinions may veer towards the withering (as you might expect, Donald Trump is not held aloft so much as dangled in disgust), there’s a level of wry humour and musical astuteness, which brings to mind acidic troubadours of old, from Tom Lehrer to Jake Thackray, as well as the unconventional approach of They Might Be Giants.

Cholesterol has played live at such legendary venues as LA’s Whiskey-A-Go-Go and Soho’s 12-Bar Club, though has now dedicated himself to the studio and film-making.  The live scene’s loss is humanity’s gain, the campaign to make Cholesterol Jones president starts here.