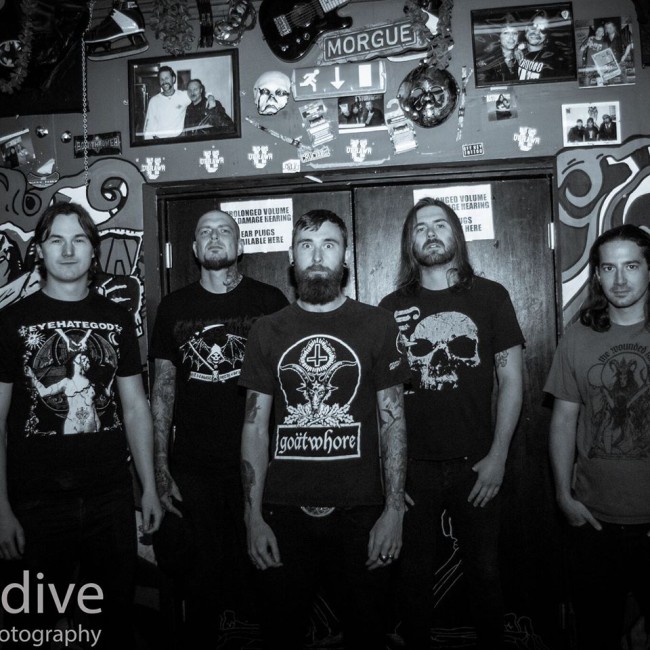 Skot Cooper has just finished a set with his “other” band, the grindcore violence of Our Earth’s Blood when we collar him for a chat on the roof of the Giffard Arms in Wolverhampton. Grindcore, it has to be said, isn’t exactly the genre of choice for this particular MV-er but the affable Cooper doesn’t care. “I love it when people like they don’t have a clue what it is about,” he grins. “We just want to get out and be as nasty and horrible as possible!”

The music is totally at odds with his friendly personality, and all it shares with the other band he’s in Burden Of The Noose is aggression. It’s actually BOTN we are here to talk about, because just days after the interview Skot and the boys will be playing Bloodstock.

They are there because they won the Birmingham edition of Metal To The Masses. The victory must’ve been sweet because they’d been losing finalists the previous year. “Yeah it was awesome when Simon said our name,” says Skot. “We had no complaints in 2014 because [winners] Eradikator were excellent on the night, but we are going now, that’s all that matters!”

Things have changed in the BOTN camp slightly since then. The 2014 show was done with two vocalists, now they are just one. Having seen them live a couple of times since the change MV adds the thought that it seems to have made them more focussed.” Skot stops short of agreeing, but does say this: “Andy [Barraclough] taking the sole frontman duties gave us a more hardcore element, and we did wonder how that would fit, but it’s been great, and we can’t wait to get out there and smash it on the New Blood!

In common with most of the bands who take to the hallowed Catton Hall Burden Of The Noose are planning to use the jaunt as a stepping stone: “We want to get as many gigs as we can, we want to play everywhere and this can help us get a bigger profile in the rest of the country.”

Skot, who picks Belphagor and 1349 as the bands he is most looking forward to seeing on the Main Stage, has seen his own outfit gain quite a following in their own area in a couple of years, but it’s not been without the odd mishap along the way. Earlier in the spring, they were playing The Black Country Metal Crusade to a packed audience of hundreds. Then about 10 minutes before they were due on, they realised their bass player was nowhere to be seen. A laughing Skot takes up the story: “He’d fallen asleep on the train, and we were going to go on without him. What could we do? Then about two minutes before show time in he walks, plus in and does the set! I’m a big “Spinal Tap” fan, so it’s all good, I took it in my stride!”

He’s promising no such problem this weekend: “Not a chance! We’ll keep an eye on him.”

Burden Of The Noose Play The New Blood tent at 18.45 on Sunday