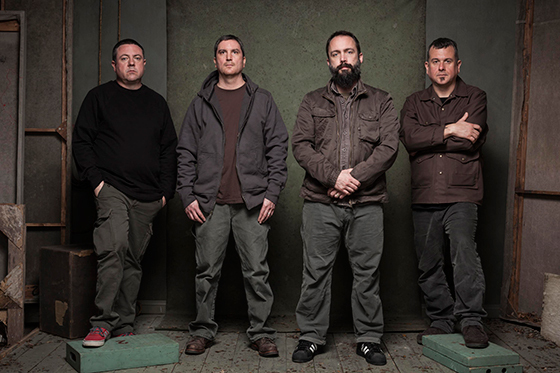 Drummer Jean-Paul Gaster on getting bigger, running your own label, and never seeing Sabbath

Clutch singer Neil Fallon has decided he’d like a response from the sold out crowd of 1500 odd on the band’s first UK headline show this year. He sings the opening chorus of the song he’s doing, stops and moves his index finger in a kind of “come here” motion. The crowd goes all kinds of mental.

MV isn’t quite sure what the rock n roll equivalent of “eating out of your hand” is, but this is as close as you are going to get.

This is the reaction that the coolest of cool kids should get. One of those bands in skinny jeans, all screaming verses and melodic hooks, perhaps, or at the very least it belongs to in the realm of the hot new things.

And yet, Clutch aren’t either of those things. They’ve been knocking around for over a quarter of a century, and at this point it might be worth pointing out that the song that garnered this response was “The Face” – a track from their last but one album “Earth Rocker” and the chorus was this:

Welcome to the mad, crazy and amazing world of Clutch.

Three hours or so before that, MV is backstage in the bowels of the Roundhouse with the band’s drummer Jean-Paul Gaster. As we settle down in the Production Office, where the setlist is on a Mac next to us (like Bruce Springsteen or Pearl Jam, you never quite know what you are going to get with the band’s live shows) the obvious first question for JP is: “Well, how have you done it…..?”

Brilliantly, it turns out he’s not sure either.

“I don’t know man!” he laughs. “I mean, look at us! We aren’t rock stars, we aren’t cool. All I can put it down to is that there’s an honesty about the music that is not a quick sell and our music is real, and I think people have understood that.”

Frequent visitors to these shores over the years, MV first saw the band in January 2006 as the middle of a three band bill headlined by Corrosion Of Conformity (“yeah those were cool shows” offers JP,”[the other band on the ticket] the Stinking Lazevetta guys are good friends of ours and it was good to be out with them”) and then with each time they kept coming back there was slightly more buzz about the four piece.

This, it turns out, was about the only thing that was planned: “Yeah, look, we haven’t got a big hit, we don’t get on the front page of the magazines, we haven’t got the hype, but what we did have was the belief that if someone saw us they’d tell their friends, then they’d tell their friends and then we’d have something going on. Each time we came back to a town there’d be more people there,” he says.

This extended to supporting other bands too. JP has spoken in the past about the band’s big break coming when they supported Marilyn Manson, while MV saw them support Thin Lizzy (and is, without thinking, sporting a Thin Lizzy tshirt while chatting to the sticksman), going out with these type of bands wasn’t something that fazed them too much either: “You have to understand we came from a hardcore background, we didn’t particularly sound like a hardcore band, but that gave us the opportunity to get loads of shows, so opening for Manson – and we don’t sound like him either – was kind of just an extension of that.”

But he’s also quick to recognise too the debt they owe to some of those support bands too: “We had the opportunity to play with Thin Lizzy and Motorhead and we were able to see that, you know, there’s not a lot of guys out there doing what they do and just playing rock n roll. Certainly on the “Earth Rocker” record we set out to make a very focussed album.”

That cutting of teeth in the hardcore scene imbued the band with a work ethic too: “Yeah it was a great way to get shows, we went all the way down the East Coast in a van, we were young, we didn’t require any money at all, so we’d run up to Boston, Pennsylvania, New York City, Richmond Virginia, but we were touring, learning, trading tapes, doing it for ourselves.”

Even if sonically, they are a world away from the hardcore days, In a way, they’ve almost come full circle. Since 2009, the band have been releasing their records on their own Weathermaker label – also home to Lionize, the opening act tonight. The label formed with the bands manager, Jack Flanagan. JP reflects now that is the best thing they ever did. “It just cuts out all the bullshit,” he reasons. “Times were tough when we were dealing with the major labels. We were very fortunate in that we were able to get a record deal very early on, at that point, everyone was getting signed thanks to Nirvana and Soundgarden. But dealing with the major labels…. that never stopped being difficult. At that point, radio was the be all end all, and if your record wasn’t on the radio in three weeks you were pretty much done! We were pretty much left to our own devices.

“Forming Weathermaker with Jack has cut all…” he hesitates. …” well most, of that out, but we realised that we could never sign to another label. Even if we start this label and we are terrible at it we can’t be worse than Atlantic, East West, DRT or any of those guys, we are still learning, but I don’t mind that.”

Indeed, JP puts the longevity of the band down to the decision that was make almost a decade ago. Since they started in 1991, Clutch have had the same line-up, and even in the briefest time we have in their inner sanctum, it is clear to see the band are very much a family. Singer Fallon wanders about, guitarist Tim Sult comes to say hello, and it is pretty serene. Gaster himself recognises this. “Yeah, its funny that we’ve all been friends for this long and in a band in that time. Most bands don’t stay together this long, and we are proud that we have.”

Being in a band, however does seem to have meant that JP doesn’t quite keep his finger on the modern rock music pulse. “I don’t listen to a whole lot of new music, but the record I have listened to most this year, is by a jazz pianist, Ahmad Jamal it’s called “Live At The Pershing”. There’s a drummer on there by the name of Vernel Fournier and he’s got a groove on there that I’ve been working on for about a year and a half …and I’ll get there!”

Whether see that on the next album remains to be seen, but thoughts inevitably turn to the future, and in the immediate term for the band it involves going out to play some shows after Christmas, before the next Clutch record will be being planned in earnest. JP expects collection number 12 to emerge in the first quarter of 2018, explaining: “It’s a good time to play back home, people are home for the Holidays and they are anxious to see some live music and do fun stuff. After that we’ll take a little break and begin the writing process before seeing where that takes us.”

At this point he leans back in his chair, to reveal a Black Sabbath tattoo on his arm. Oddly though, it seems the drummer has never seen the band play. A thought thrown into sharp focus by the fact that February 4th and the last ever Sabbath show is approaching. “You know, I’ve never seen a Black Sabbath gig!” offers JP somewhat ruefully, “I got a ticket months ago when they played in the US this summer, but then we got a call to play European festivals and I missed it. My wife went with a friend of hers and shes sending me selfies and so on……!”

But such small sacrifices are surely worth paying for the 25 years Clutch have had, and Gaster agrees, “We didn’t go into this looking for a career. We just wanted to write better and better records and play better and better shows. If you look back to our major label days, we were selling a lot less tickets than we do now. Then somewhere after Earth Rocker it seemed to get crazy,” he says.

Three hours later, when the band almost literally have a room full of people wrapped around their little finger is all the proof you need to see that it might just get crazier yet.