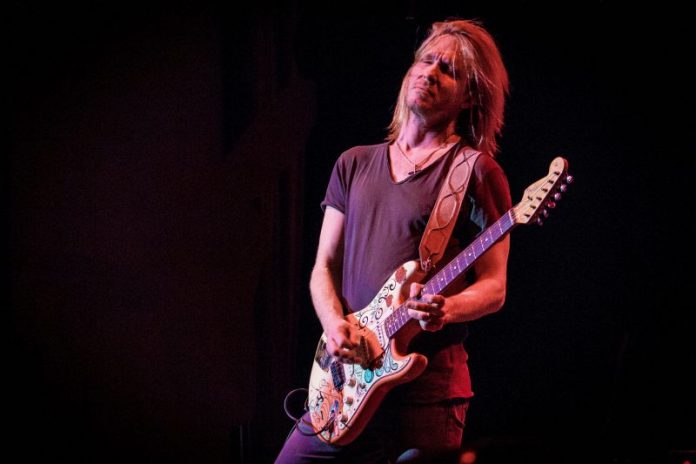 “I just set out to make the best record of my career. I mean, it’s been 25 years and it’s a tough task to do that, but that was my aim.”

Kenny Wayne Shepherd sounds business-like when he says those words. Actually no, determined is more the phrase. Certain even.

The record he’s talking about down the line from the US is his brand new solo effort, “Lay It On Down”. The album is his first all new solo material in six years, and he’s every right to think it could be the one.

He’s changed things around this time. He went to Nashville to work with a new producer in Marshall Altman and some new writers too, and that was all part of the plan. “Yeah, I wanted to freshen things up this time”, he says. “And working with Marshall was part of that. I’d first met him around three years ago and we hit it off and found we had a lot in common about the way we worked. He was the only one I wanted to produce the record and I think he has done a great job.

As proud of it as he is, MV wonders if Shepherd is one of those artists that is never happy with the finished product. “There comes a certain point where you just have to let it go, you know? I know there is artists that will spend weeks on a chord sequence, but no. That’s not for me. I can see how that might drive people crazy.”

Maybe that more natural approach comes from the fact that music has been part of the fabric of KWS’ life. His father is a prominent radio personality and his childhood was one that was immersed in the greats of that record collection. Then came the moment when he set foot onstage for the first time. At 13.

The key point in the aforementioned quarter of a century career is that Shepherd, who is polite and quiet throughout our chat, is still only 38 years old. “At the beginning,” he recalls, “I wasn’t even dreaming that I could support a family, make money, have a career, all I wanted to do was play the music I loved.”

The obvious question to follow such a statement up is: “Well is  it still about those things?” The answer is unequivocal. “Yes, absolutely,” he shoots back straight away. “I love what I do. It evolves, of course, but each record is a snapshot of where I am when writing it, this one I am very proud of.”

Perhaps an album, shall we say, influenced by the blues, rather than outright blues, nevertheless Kenny does agree with MV’s assertion to him that the venerable old genre is undergoing something of a renaissance right now. What’s more he has a definite opinion as to what to put that down to.

“The truth.” He states. “There has been two or three such times that the blues has been on an upswing, and each one of those times, you can put it down to maybe that there is a lack of anything real elsewhere. The blues was never that and never will be. It is real. Perhaps the most truthful and real form of music there is.”

The present boom, though, led by the likes of Joe Bonamassa – with whom KWS shares a label and work ethic – is good news for everyone. “Yeah its exciting that we can play bigger venues, things are really starting to happen for us over there [he means Europe] and we’ve been on an upward trajectory in the US too.”

He’s over the pond in these parts a lot in the near future. Playing both festivals (he’s at Ramblin’ Man Fair later in the month) and club shows in the Autumn. It is interesting to get his take on which he prefers. “You know,” he ponders. “I like them both. I think the public prefers the smaller, more intimate shows, where they can see the whites of the performers eyes and it feels more personal. And I like those too. Especially playing theatre’s where it’s all seated – our audience perhaps likes to sit down and appreciate the music more – but then…..[pauses] playing festivals is cool.  I mean, after all, why are you even playing music if it isn’t too reach as many people possible?”

Those shows and the album are completed under the name of the Kenny Wayne Shepherd Band. MV puts it to him that, given that he doesn’t sing on most of the songs (Noah Hunt takes most of the lead vocals) he is not a conventional solo artist. Given his love of collaboration, the answer we got was not what we were expecting: “I don’t know. Others have done it. Eddie Van Halen, he named the band after himself, “ he suggests. “But I am clear that I am a solo artist anyway. I make the decisions, I write the songs, the record contract is with me. I stand and fall with these records.”

Even the singing on his songs – he provides vocals on a few of the cuts on “…..Down” was a conscious decision. “It was a matter of absolute necessity,” states Kenny firmly. “When I started remember I was just a child. You couldn’t have a kid singing blues songs and sound credible. As time has gone by my vocals have got better and to the point where I am perfectly happy singing on the albums.”

Without wishing to dwell too much on the past, MV wonders how difficult it was for the young Shepherd to taste fame so quickly and at such tender years. After all, most teenage guitarists aren’t appearing on the Letterman show and winning awards. One who was dismisses the adulation. “I just tried to remain humble and keep my feet on the ground. The way I was raised helped me in that regard, I think.”

A musician who writes all the time (“there are loads of ideas for songs on my phone right now,” he says.) it seems incongruous that there has been such a lengthy delay between original albums. Explaining that all the songs on “Lay It On Down” were written specifically for that project, he does reckon that there’s enough material for a new KWSB record and that the wait for the next one might not be so long, he adds that any solo album might not actually be the next record he makes. Rather that might be another of the supergroup that he’s in.

The Rides, which featured Stephen Stills and keyboard player Barry Goldberg, have been talking about making record number two. “Yeah the first one was so cool, and I learnt so much. We got together back in March and we talked about doing another, so that might be my next record. As for my next solo record, I don’t know, I have a lot of old time blues to do, so maybe it could be that. Wait and see!” he teases.

That’s for the future. The immediate is taken up with “Lay It On Down” and MV has already said in our review of the album that it was the career high that KWS wants it to be. Which brings us back to the start of the interview. “I just set out to make the best record of my career.” Shepherd had said some twenty minutes before. He followed this up with the thought that: “but the fans will decide that, and I am sure they’ll have their own favourites from everything I’ve done, but I hope people love this record too.”

Of that there is no doubt.

Lay It On Down is out today.