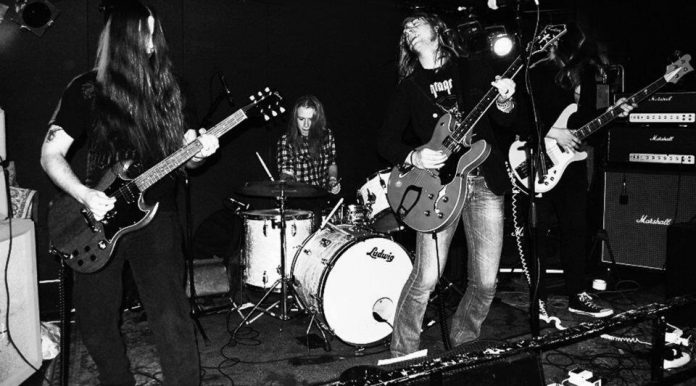 …..And that means we met the nicest men in metal. Join Tobias on a quest for Geezer Butler

You know, you can tell a lot from watching a Soundcheck. Bands preparing for a gig are different beasts from the ones you see onstage. Natural habitat and all that. But more than that, you can see how they are with each other.

MVM is sat at the back of the basement room of Birmingham’s The Rainbow, chatting to acquaintances in the local support band while Noctum are surveying the sonic situation for later. They run through a song and singer David smiles at the sound man. “More everything in my monitor,” he grins. “Lets make it loud!”

The venue in an area of the second city with its share of gig venues and which is trying to re-invent itself as a “cool” spot, after years of underinvestment. It’s derelict warehouses are now home to trendy clubs and trendier eateries and they close the road off for a pop up restaurant event once a month. But it’s still not right in the city centre, it’s slightly outside.

Which, if we extend the metaphor, makes for the perfect locale for this gig.

Noctum are here, on their first UK tour as support to their countrymen, the trad metal tour-de-force Steelwing. The feeling of them both to a certain extent being outsiders trying to get into the metal mainstream isn’t far away from thoughts a little later when the crowd for the show isn’t what you might term as huge, but the bands give it their all as the same faces you always see at these things get their rocks off and spend a load of money at the merch desk as they leave.

But such things are not on the agenda when just after that Soundcheck we are sitting with Tobias – bass player and founder member and, you guess, it’s driving force – in the upstairs bar. There’s an elephant in the the room, here, so we might as well get it said: So Tobi, how come a band who sounds like you do hasn’t played in this city before? Now there’s two things here. First and most important, Tobi (as he insisted on being called when we shook hands) is without question the nicest person in rock. People can say it’s Dave Grohl, that’s only because they haven’t met Tobi, and second, he knows his band owe a debt to Sabbath and Judas Priest, so he knows that his band owes Birmingham.

He has the decency to look shocked: “What?” He deadpans. “This city has metal…..?” Deciding he can no longer keep a straight face and that he’d better answer the rather stupid question he says: “Its finances, man. It’s really expensive to tour England, and Ireland’s even worse, but we wanted to come here so bad. We just said ‘yeah let’s go!’ And we’ll worry about the rent when we get back!”

Tobi is the booking agent too, and one of the prime reasons for the tour is that there is a promoter in Newcastle that was desperate to see the band, “So we contacted him to say we’d play there and then looked for other promoters who could help us and before you know it, we had a tour,” he says.

That admirable can-do spirit is nothing new to Tobi, though. This after all was a bloke who, just weeks after the band recorded their debut demo had got a record deal with the Easy Rider Label. He deals with this as though it happens to every band: “Well I just posted it to every label I could think of and luckily they liked it.” Not that the new contract didn’t present its own problems: “Well yeah,” he grins. “We realised that we had to write an album!”

They did, and that one drew the attention of the much larger Metal Blade. An album has already been released by the label, and a new single came out just a month back, and Tobi is full of praise for their new home: “They’ve been great to us,” with genuine affection. “We met Brian Slagel [Label Boss] and he was so cool to us, so hopefully we’ll be with them for long time, if they’ll have us……!” Then almost as an afterthought he says, “We share a record label with Slayer, how cool is that!?”

Tobi knows his metal history. Indeed he is extremely well versed in the music he loves. He’s pretty unequivocal about his reason for taking up the Bass: “Geezer Butler, he’s the one for me, he’s my inspiration!” He says with both excitement and firmness. When MVM points out that the venerable Sabbath God lives (when in the UK) just a few miles from here, the Noctum man goes to stand up: “come on, man. Let’s go find him,” he laughs. “Tell the boys they are playing without me tonight!”

If the Sabbath love-in was hardly a shock, then perhaps Tobi’s favourite band was a little out of left field. Without hesitation when asked the question, he replies: “Pink Floyd.” Does that mean we can look forward to Prog on the new album, then? He laughs again, “wait and see…..”

That does lead on to another, more serious question. The single, the A side of which is called “Until Now, Until The End” hints at more doom perhaps than the previous work. But the four stringer is quick to stress that this isn’t necessarily a pointer for the album. “The truth is, we haven’t written it yet, whether that’s a proper taster I’m not sure, we might just be throwing you off the scent!” He laughs again, as he often does and he does seem to be a content individual. Perhaps it’s because he’s from a smaller city in Sweden than a lot of bands. Tobi is proud of Upsalla though, (“it’s a lovely place,” he tells us.) but he says it doesn’t have a great music scene. It must be the only place in the country that doesn’t, given the amount of bands of all different types that are from there. The bass player himself isn’t sure why this should be. “The climate?” He offers, “maybe it’s because there’s nothing else to do in winter except all get together and sing, I don’t know, but I’m proud to be part of it and hope to emulate some of the bands.”

Watching them a couple of hours later there’s no reason to say they won’t, but there’s another reason to want the very best for Noctum. As MVM leaves the venue there’s a shout from downstairs. Tobias and David want to say goodbye. Farewells said, there’s one more yell from behind, it’s Tobias: “I’m off to find Geezer Butler,” he giggles, not for the first time.