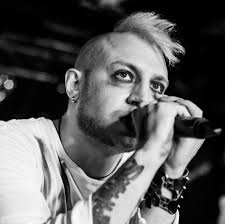 Ahead of the band’s triumphant return to the Whitby Goth Weekend Donnie caught up with vocalist Rio Goldhammer to get the lowdown on everything from  the much missed Mark Tighe to his Real Gothic football team.

The multi-talented author, journalist and musician Rio Goldhammer took time out to chat with Donnie about all things 1919 and much more.  The interview was conducted with Rio on the evening of the 21st April 2017.

Maximum Volume: How are you Rio?

Rio Goldhammer: I’m great, thank you.  I’ve just come back from rehearsals because we have the Whitby Goth Weekend coming up this weekend.  We have a new guitarist in the band and it will be his first gig with us so we’ve just been working hard to get him up to scratch and he’s been working very hard as well and it sounds great.  We are really optimistic.

That’s great to hear especially after the tragic news of Mark’s (Tighe) passing.  It’s good that things are moving forward which is the ultimate tribute to him.

Absolutely,  It was his legacy and he was desperate for us to carry on.  He was very selfless.  All he was thinking about during his illness was that he didn’t want to hold us back.  He told us that the band needs to continue and we didn’t want to get a hired gun in.  It needed to be someone we knew personally and got on well with and Sam (Evans) was the right man.  He knows what shoes he is stepping into but he is his own man.  He puts his own spin on things and his is absolutely nailing it.

Having someone come in who is confident in his own identity and can bring a fresh perspective and impetus to the band can only be a good thing.

That’s right.  I mean Mark was so unique in the way he played with his style and his setup with weird tuning and his made-up chords!!  If you had to pick a guitar player to learn tracks by ear then he would be the worst one to choose.  You couldn’t do it.

When he first got his diagnosis he wanted to teach someone else because he knew his time would not be long and he knew it would be difficult for someone to come in.  Sadly he deteriorated so quickly that it wasn’t possible.  We were all there for his as friends and if you can take away any positives from it then it’s about having no regrets about the time you’ve spent together.  And we certainly don’t have any regrets.

We never stopped writing and recording.  In the time Mark and I were working together, before Mick (Reed – Drummer) came back into the fold and the band really kicked off again, we had done a whole album worth of stuff that will be released as the ‘Circle of the Absurd’.  There is work to be done on it to finish it off but that’s an album.

In the last year and half we have done an EP, this album and a live album.  We are now working on another new album already so when the vinyl release of Bloodline comes out in September there will be another two tracks that were recorded with Mark that will be included.  After that there are other demos that will be developed.

How quickly did you record Bloodline and how was the process?

It was quite quick and written and recorded in a short amount of time.  We just got in there and jammed and wrote and played off each other.  It’s been the same from day one.  The first day Sam came in to jam we wrote a new song with him!!

With Bloodline we did it all in the practice room.  Drums, guitars and bass were all recorded live at the time with a click track then just did one guitar overdub then vocals.  It was as close to live as we could get it.

The album definitely had a live vibe quality to it.  How has the album been received?

It’s been really positive.  It’s a crazy situation as within a few weeks we had the outpouring of support following Mark’s passing and then the albums reviews came out and got such positive feedback.  People seem to connect with this album and that would have blown Mark away.

We’ve put a lot into it and we believe in what we are doing.  For me personally it’s important to have come into something with such history and done it justice.  Long may it continue.

How many tracks from Bloodline do you think will make it into the live set?

A good handful of them.  Having only just got Sam in we wanted to focus on doing fewer songs perfectly as everything has to be right before the shows.  There are songs that we would like to do live that are great live tracks but just haven’t had the time yet to really get them right.  The set will be about 50/50 in terms of old and new tracks.

It’s a difficult balance for many bands but if you want the new album to be considered amongst the band’s best work then a decent amount of the tracks have to played in the live environment to enable the fans to connect in another way to the music.

100 percent.  We go one step further than that and we have to restrain ourselves from playing tracks live that haven’t even been finished or released that we have only just written them.  Otherwise we’d just go on stage and jam for an hour!!

The reason why we have been in the business so long is because we love it and we are proud of what 1919 has done.  We like having something new to give to people.  there are places that we have played a lot and we always try to do something new.  We don’t want to do the same 15 songs every night year after year.  Then again I used to love seeing Motorhead.  You knew what was coming and you love it anyway.

Will there be a number of live shows in the summer.

The tour will probably end up in 3 or 4 parts.  We are supporting Spear of Destiny in Leeds, one with Chelsea in Brighton followed by three headline shows in Europe.

Then we have some shows in May and out to France in the summer.  Hopefully there will be a few dates around the same time as the vinyl is released.  We’d play 300 nights a year if we could.

I’ve always tried to make sure that I have the right balance in my life to work around music and because of that I’m able to make things work at short notice.  I talk with the band almost every day.  It doesn’t take up 100% of our time for us at the moment though.

You are playing the Whitby Goth Weekend in a day or two.  Aside from the show itself is the most important part of the weekend the football match?

Absolutely.  It is for me anyway!!  Real Gothic FC is my team and we are the best all-goth team in the UK.  We play at Whitby Town FC’s stadium and it’s rammed with goths.  It’s great.

We play the match on the Sunday the day after the gig.  I’m yet to perform and play a match so this will be the first time for me.  As long as I have my pasty in the morning and the sports physio’s are there I’ll be fine.

On that note.  I will wish you luck for the gig and the football and will catch the band on the road.  Thanks for taking the time out to talk with me.

Great.  Pleasure talking to you.

WHAT I LISTEN TO ON THE TOUR BUS – WITH MONSTER TRUCK

Q AND A WITH: ULI JON ROTH

Q AND A WITH: LUCIFER – MY FIRST TIME

OUR FAVOURITE ALBUMS FOR THE ROAD – WITH 10 YEARS