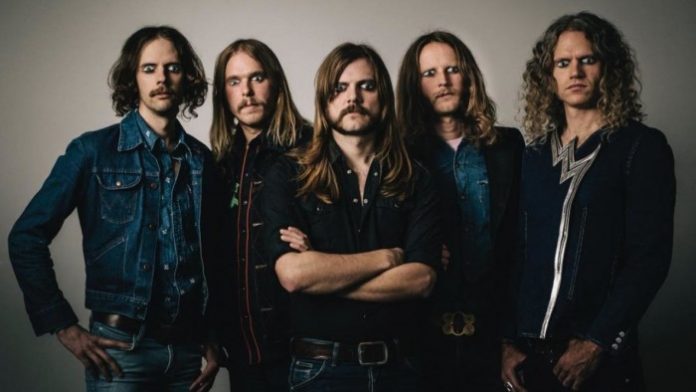 How songs start as jokes, and life on the road. Just don’t expect any planning

Drummer Pontus looks us in the eye when he says it, so you guess he means it, but MVM still feels the need to check. “It was a joke,” he repeats.

The answer is in response a pretty standard – and ok, maybe dumb – question about the title track of the album his band, Horisont, have just put out, “Odyssey”. It’s opening track is a ten minute epic about space travel that gleefully attempts every style that’s ever been tried in heavy rock. It’s an epic thing with Moog synthesisers and just about everything else, it was also the obvious place to start this chat. “It was a joke,” says the patient Pontus for the third time. “We talked about trying something really out there, and he [gestures to singer Axel sitting just feet away on some steps] had a Moog and wanted to experiment.”

The track is so good, though, that they must have planned the album around it? Not so according to the affable sticksman. “Nah man, we don’t plan much to honest, it just happens.”

It turns out that the band, for the most part anyway, aren’t even sci-fi nerds. Magnus, the bass player, puts his hand up to that one: “that’d be me and Axel, and to a lesser extent Tom [Sutton – guitarist], the rest of the guys don’t get it,” he laughs. “But they let’s us do it if the songs are good.”

They are. And “Odyssey” is a brilliant piece of work, a progression from their other albums, but still rooted in the classic rock and metal that they all clearly enjoy. Given the answer to the previous question, MVM hesitates to ask this, but that must have been thought out, right? The band laugh at the thought: “Definitely not, says Axel. We aren’t the type of guys to think things through.”

We are less than an hour away from their stage time. The five guys sitting in The Slade Rooms bar do not include Sutton, who is the leader of the equally marvellous Order Of Israfel, the band he formed after leaving Church Of Misery. They are playing as main support to Pentagram on the doom legends Euro jaunt. It’s all good, though, because as guitarist Charles puts it: “we got this man in…..”

The chap he’s pointing at is a quiet, smiling individual, and one who gets immediate MVM bonus points for wearing a Thin Lizzy top, he’s better known as the guitarist in the mighty Blues Pills, but Cory Berry is later to do a fine job and fits in superbly with his new mates. It does show, however, that logistically touring in this modern age is a difficult endeavour.

That’s something all of Horisont understand. The members all have jobs back home. All that is except Magnus: “I quit my job for this tour” he grins. “I’m gonna have to get one when I get back, though, but I’ll worry about that in a few weeks”. Some of his bandmates are luckier. “My employer gives me unpaid leave,” explains Pontus, “So that’s good, it means we get to do this.”

The tour – which has just started – is going on for seven weeks, and sees Horisont open for German trio Kadavar. They are sharing opening duties with Americans Satan’s Satyrs, with US stoner rock mob The Shrine also on the bill. All four bands have material out recently, which is usually a tough balance. Not here though, Horisont have decided to just go for it and play the “Odyssey” stuff. “We’ve got half an hour,” says Axel. “And it’s the ‘Odyssey’ tour, so we are just going for it, all but one tonight is from it.”

The new stuff is going over well, with Charles confirming fans are enjoying the set “People seem to love it, so that’s great.” The lack of a smile, though, makes you sense there’s a “but” coming and there is. “But, since we got in England, the crowds haven’t been great, which is a shame. In Europe they were, but over here, so far it’s not been so good. I don’t know why that is,” he shrugs.

And if we are honest, it’s not packed out tonight either. There are a smattering of people at the bar as we talk and there’s a reasonable crowd when they take the stage, but the sold out signs aren’t needed, if we can put it like that. This creates its own problems for the band. Ask them what their ambitions for the next two years are and the answer comes back quite starkly from Pontus. “I just want to have Horisont pay my bills,” he admits. “I think the days have gone where we can be millionaires from this, but if we can make a living then that would be fantastic.” Where some would blame the Internet, Charles looks at it another way: “I think Spotify and social media has helped us,” he says. “We can reach so many more people than we’d be able to, so I certainly don’t complain.”

Even allowing for that, though, you sense there is very much a hand to mouth existence on tour, and sales of Merch help the guys eat on the road. It’s for this reason the band have never played America. “It’s too expensive,” says Charles, somewhat ruefully, “but it’s cool man, hopefully we’ll get there one day, we’d love to play there.”

One thing you do get a very clear sense of when talking to Horisont is that they love what they do. They still maintain their ability to be fans of the music they play. “We still go to shows,” says Pontus. “I’m like everyone else, when Iron Maiden or Kiss come to Gothenburg I’ll still get excited and travel.”

In fact, the whole are band are off to a gig just a few days after our interview. They are in London the same night as Pentagram, and with their absent bandmate in support, it’s too good a chance to miss. “As soon as we get off stage we are going to go to Islington to watch,” says Pontus. “It’ll be a cool night.”

With that its time for this night to begin and Satan’s Satyrs are to take the stage in a couple of minutes. Following them a little later Horisont make good on all they said they’d do, and “Odyssey” is played, in full, right at the start and the band look relaxed and confident onstage as you’d guessed they would.

As jokes go, it’s better than a “knock knock” one really. You have to give them that.