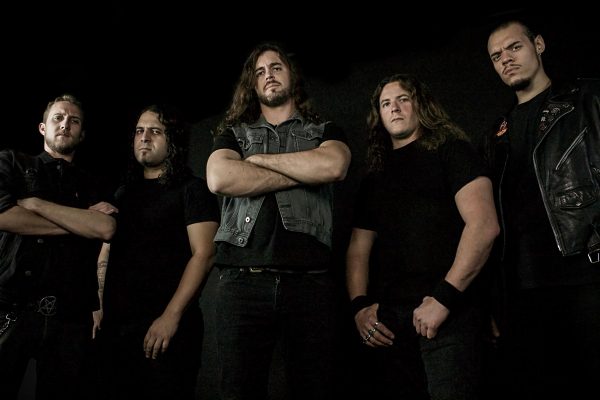 You could, if you so desired, put that down to the emotion of playing a charged-up set, or you could dismiss it as a soundbite.

That would be to neglect the point though, it needs further discussion. Around 90 minutes before, MV had been backstage in an old factory space that a couple of days before had been home to the trendy Digbeth dining club. The latest attempt to turn this run-down part of the second city into something a little bit more gentrified.

Tonight, though, its kicking it old school – or so it seems.  Its thrash all the way as Warbringer are the main support to Havok’s and that is why we are sitting on a sofa sipping water with John and discussing the state of the LA band’s world.

Chief amongst this is the band’s brand new record. “Woe To The Vanquished” – just released – is the best and most ambitious record of the bands career, a fact that Kevil acknowledges himself: “I think that too. It’s definitely the first album we’ve made where I think the parts have come together as we wanted them too. It takes is into other areas. Areas of extreme metal, black metal, all kinds of places. Those sounds were and continue to be massive influences on me personally and the rest of the guys – I call what we do Extreme Thrash.”

You seldom meet a man more passionate about the music he makes than Kevill. Asking him a question is easy, because you just sit back for five minutes and listen to him talk and there is a real sense that he pours himself heart and soul into Warbringer – the band he formed 12 years ago.  Even down to the way he controls the room he’s in. One of the support is messing about at the back, laughing and playing the Rolling Stones on the stereo. John puts a stop to this: “Guys! We are doing an interview here! Keep it quiet!” as if nothing is going to divert him from the path.

There have been dark times on that journey, there have been occasions when it looked like it was all falling apart. “Yeah, after [2013’s fourth album] “Empire’s Collapse” it got hard. Me and [long standing cohort] Adam Carroll had to put some makeshift line-ups together just to keep it alive, it was hard but we did it. And now I think with “….Vanquished” we are ready to move forward to where we want to go.”

Kevill is disarmingly honest when asked what will happen if that breakthrough doesn’t come: “Well, it’s got to or else it might be all over. I rely on the kindness of my family and fiancé to go out chasing my dreams, coming on tour to Europe and things like that. We have got so far and obstacles have always got in our way. It’s difficult to make people care about what they perceive as “new music”. I mean we’ve been doing this over a decade, now, you know?! We aren’t a “new band!”

Not that he’s in doubt about much, but John is in no doubt at all about where the blame lies for this. “Man! The media have got so much to answer for,” he states emphatically. “They have a responsibility to get behind the bands, but also, a real responsibility not to look at everything through some prism of the past where every band must be compared to one from history! I’ve read reviews of our albums that have compared our stuff to Anthrax, Kreator, Sanctuary even! I love those bands – I am a music fan – but we don’t sound anything like them. People need to get out of this mindset where everything good came out before 1990, or worse – that is all about the Big 4. Otherwise there will be nothing left.

“Woe To The Vanquished” is more than a brilliant record. It is a giant leap forward for the band. It’s last track “When The Guns Fell Silent” is an 11-minute epic, the type of thing you wouldn’t necessarily associate with thrash metal. Kevil agrees, and adds: “The time was right for that song. We haven’t been in a position to create that multi-layered thing before. It was right this time. Iron Maiden were a huge inspiration for us in writing it too, I couldn’t be happier with how it turned out. Maybe there will be more like that in the future, I don’t know. “

They don’t play it in their 45 minutes later – tonight is a night for fast and brutal – but John is keen to talk about the lyrical significance to Britain.

The ideas it contains come from the work of British Warrior Poet Siegfried Sassoon, and as a consequence John says: “The themes in it are maybe more relatable to an English audience than those in America. I was so happy to get Sassoon on there though, he’s such a great writer.

Historical references, of course, are nothing new in Thrash metal. But Kevil is more qualified than most to talk about them. He is studying to be a history professor. Eloquent, erudite and very obviously fiercely intelligent, the singer can see the links between the populism of the current political sphere and those of the past. He also believes that the rejuvenation of thrash in recent years might have something to do with current affairs. “Yeah, when I am singing about the hardships of the battlefield or the terrible things these people went through, it does put other problems into perspective. But thrash needs to be angry, violent, or it doesn’t work.”

As you’d expect, he has an interesting perspective on how the world is looking: “People aren’t used to global conflict,” he suggests. “It’s been 70 years since the last one. And more importantly the next one is the very last one.  In the 60s they were testing Nuclear Weapons that caused seismic activity three times around the world, what capabilities we have now is truly frightening. That’s what “Silhouettes” [lead track on “….Vanquished]  is about actually. The apocalyptic power we possess.”

A student of the history of the music he loves too, the talkative frontman knows the significance of sitting in this room, in this city, carrying the torch forward into the future, if you will. He brings this up himself actually, with no prompting or questions from MV. “I just have to say and we can now they’ve finished, but it is all about struggle, always has been. Overcoming obstacles. A young factory worker who loses  two of his fingers and has the passion and drive to go away and invent a totally new way of playing? That’s incredible, and four decades later, in another century, we are sitting here talking because of what Tony Iommi created. I don’t know about you, but I find that a truly inspiring human story.”

Heavy metal been a struggle since too. Warbringer know this as well as anyone. But fast forward two hours to the last strains of their set, and with John Kevill on his back crowdsurfing after a visceral and thrilling  show – one that started with what is essentially side one of their new album – the passion that he had displayed backstage is nothing compared to the force of nature he is on it, but five minutes later and still dripping with sweat, he’s at the merch table selling t-shirts and posing for selfies with anyone and everyone in the near sold -out crowd.

Happy to be with the people because if he wasn’t onstage he’s be there watching a band just like his own. A deep thinker John Kevill might be, but Warbringer is evidently his life. Don’t anyone dare try and stop him from achieving his aims, because metaphorically at least, he’s ready for War.

Woe To The Vanquished is out now