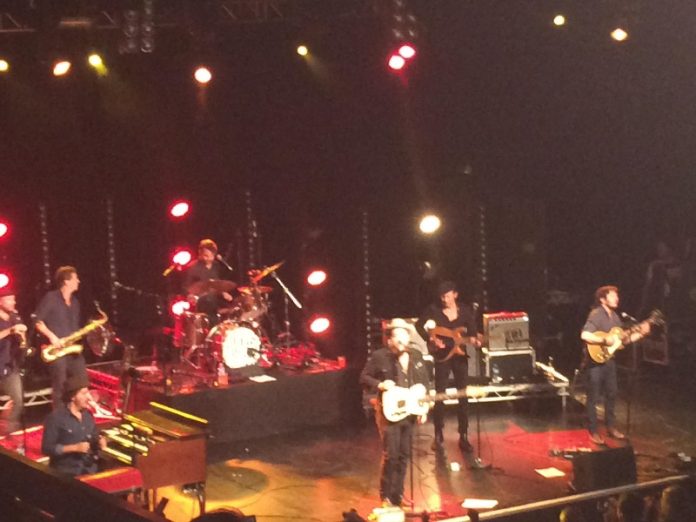 Working up a sweat on a Monday night

Call us old fashioned if you like, but one man bands used to mean a bloke with a kazoo, a drum on his back and cymbals on his knees. These days, evidently, it means loops and all kinds of machines – at least it does if Ed Harcourt is anything to go by. It makes for a compelling spectacle too as this prodigiously talented singer/songwriter constructs his songs before your eyes. “Occupational Hazard” is an interesting affair, while “Loup Garou” is more stripped down. to these ears, actually, Harcourt is at his very best when he keeps it simple, like on the superb piano led title track to his new record “Furnaces”. Another of the new tunes “Last Of Your Kind” is dedicated to Leonard Cohen, while Night Sweats Trumpet player, Wesley Watkins, adds some colour to “Apple Of My Eye”.  An often brooding, frequently unconventional set from an artist who clearly is bursting with ideas.

On this occasion it is best, perhaps. to begin at the end. The end of the main set to be exact. Nathaniel Rateliff And The Night Sweats have just turned the Academy – a venue that is is at the best of times a pretty nondescript concrete box right on the edge of the city centre,  with cheap hotels to the right, strip clubs to the left and hemmed in by a dual carriageway – into something that is equal parts a second line in New Orleans on Mardi Gras and a Gospel revival. They’ve done this with other songs too tonight, but this particular one is “S.O.B” and its got a ‘whoa,whoa,whoa” bit at the end. The audience gleefully take up the opportunity to sing it. Nothing unusual in that, but then, the band leave the stage and the 2000 strong crowd just carry on. And on. And on, until the Night Sweats return to the stage and sing “The Shape I’m In” by The Band.

Does that sound like a band that will be in club sized venues much longer? No, thought not.

They deserve this reaction too, because for an hour and 45 minutes NRATNS are simply a celebration of everything that’s ever been good about mixing rock, soul, blues, gospel and everything else in between.

They might be from Denver, Colorado, but they have a real feeling of the Boardwalk, New Jersey about them. It is meant as the biggest compliment possible to say “I Need Never Get Old” could be a Southside Johnny song, “Howling At Nothing” verges on the glorious and “Thank You” is a timeless piece of work that is a real highlight here.

Rateliff – who seems genuinely humbled at the reaction – is a kind of Ringmaster-cum- Preacher here, a natural showman he also tries a brief acoustic section, which sees Leonard Cohen’s “Chelsea Hotel” rather spoilt by Brummies who couldn’t shut up, but that is a small low point in an evening that only had highs elsewhere.

Highs like “Shake”, which is turned into a real jam here, a new song called “I Did It” which is strong enough to hold its own here, and the brilliant “Trying So Hard Not To Know” – all of which are eclipsed by the aforementioned “S.O.B”.

After the crowd have stopped their impromptu singing, “What I Need” starts them again and the apparently unplanned cover of Sam Cooke’s “Havin’ A Party” is a a perfect – and entirely – apt way to end things.

A party of the best kind and all the proof you need to see that Nathaniel Rateliff and The Night Sweats are coming to an arena near you soon.