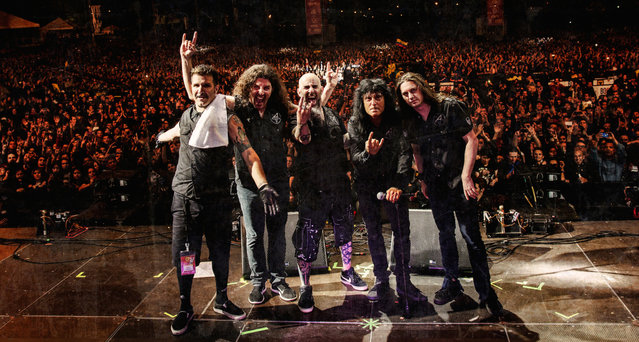 ANTHRAX’s forthcoming live release Kings Among Scotland is due to hit shelves on April 27th and can be pre-ordered now!

To mark the occasion, the band has released the digital single ‘Breathing Lightning (live)’, which can be purchased here:  http://nblast.de/AnthraxKingsScotlandIT

Pre-order the album on CD, DVD, Vinyl and as part of a Limited Edition bundle, here: http://nblast.de/AnthraxKingsScotland

The two-hour long live DVD was filmed February 15, 2017 at the band’s sold out show at the historic venue Barrowland Ballroom in Glasgow. The release incorporates the band’s entire live show – which includes gems like ‘Madhouse,’ ‘I Am The Law,’ ‘Breathing Lightning’ and ‘Indians’ – as well as interviews, behind-the-scenes footage and other B-roll shot on the band’s tour bus, backstage hotels etc. There is also a gear rundown with each of the band members.

Kings Among Scotland was produced, directed, filmed and edited for Film24Productions by Paul M. Green (OPETH, THE DAMNED, THE LEVELLERS), with the sound mixed by ANTHRAX studio producer Jay Ruston.

Over the band’s 35-year career, ANTHRAX have sold in excess of 10-million units, received multiple Gold and Platinum awards, six Grammy nominations and a host of other accolades from the media, industry and fans. In 1991, their music helped break down race and genre barriers when they collaborated with PUBLIC ENEMY on ‘Bring The Noise’. And, of course, along with METALLICA, SLAYER and MEGADETH, ANTHRAX helped pioneer the thrash/metal genre as a member of The Big Four.